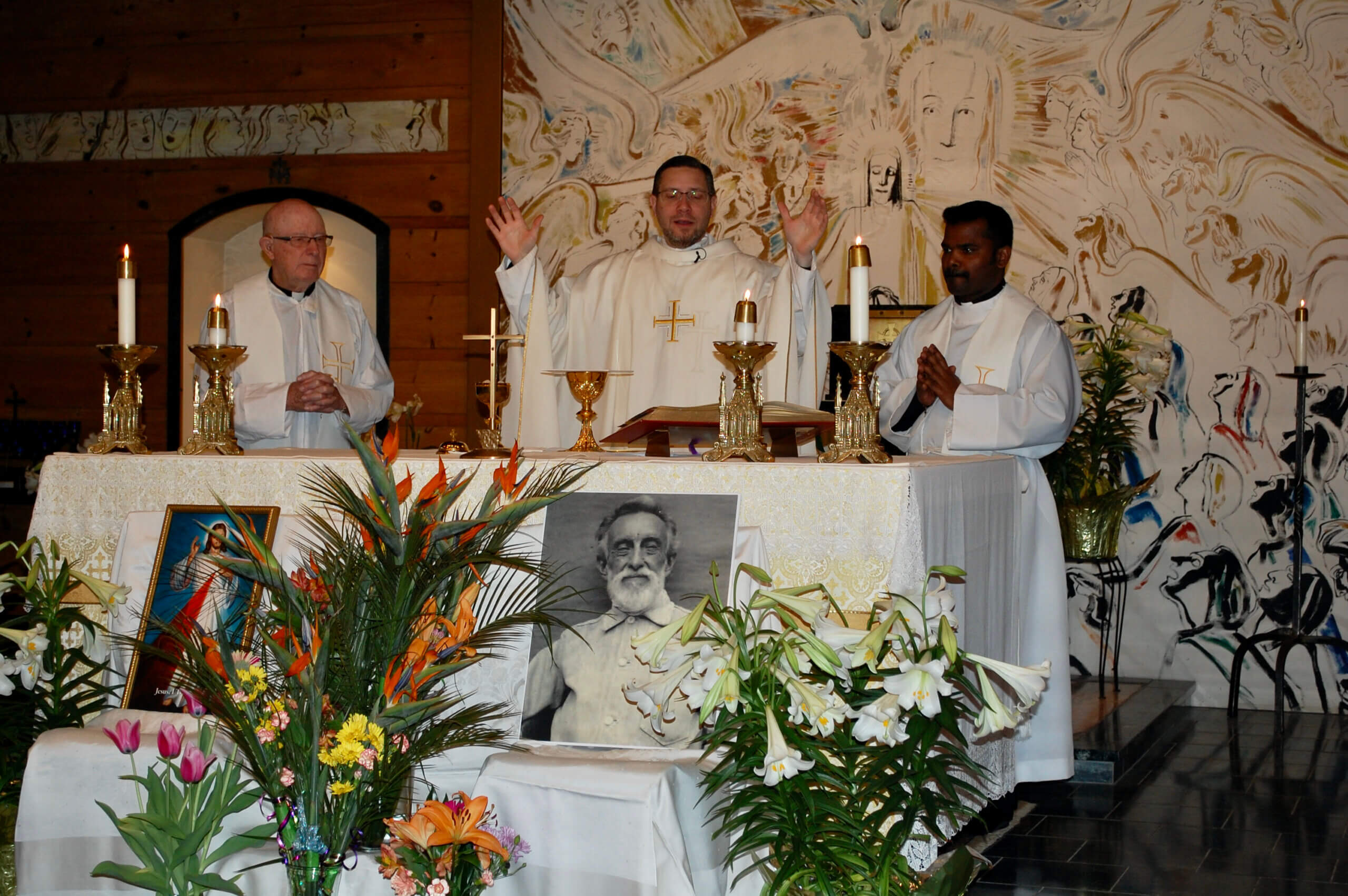 Why would a parish celebrate the 179th anniversary of someone’s birth?

Blessed Sacrament Parish in Stowe did just that on April 24 to mark the Stowe birth of Ira Dutton — a Civil War veteran who joined St. Damian of Molokai in his ministry to lepers — who since the 178th anniversary of his birth was declared a Servant of God, the first step toward canonization.

Blessed Sacrament Church, built on land that was once the Dutton farm where Ira was born on April 27, 1843, is dedicated to him.

He entered the Catholic Church on his 40th birthday, taking the name Joseph after his patron, St. Joseph.

“We are proud to have the birthplace of this remarkable man from Lamoille County marked by one of our churches, and every year moving forward we will honor the work of grace that God accomplished in him, leading him to a life of penance and a life love and charity poured out in serving Christ in the poorest and most abandoned,” commented Father Jon Schnobrich, pastor of Blessed Sacrament Parish and Most Holy Name of Jesus Parish in Morrisville.

Brother Dutton’s birthday celebration — on Divine Mercy Sunday — included Mass, a tour of the exterior of the church that depicts his life on Molokai, Hawaiian music and dance, videos relating to his life and a Hawaiian-style luncheon.  Many of the participants wore leis or floral hair clips.

“Our Servant of God Joseph Dutton’s life bears a beautiful witness to the mercy of God,” Father Schnobrich said in his homily. “That mercy accompanied him through war … [and] alcoholism and opened the door to a life of mercy, seeing God in the … most poor.”

Brother Dutton’s life “inspires us with hope for those great and holy things God desires to accomplish though us,” Father Schnobrich said.

A portrait of Brother Dutton stood on one side of the altar and one of the Jesus’s Divine Mercy on the other; colorful flowers between them brought to the sanctuary by children at the beginning of the Mass.

Claudia Kanile’a Goddard of New York City sang a song, the lyrics of which were composed by the boys of the Kalawao Band, leprosy patients, in 1879 to express their love for St. Damien.

Later, at the luncheon, she accompanied members of “Gracious Ladies” of New York who performed authentic hula dances.

Blessed Sacrament parishioner Jim Brochhausen called the birthday celebration “quite amazing” and said it is “phenomenal” to have such a connect with Servant of God Dutton.

Another parishioner, Susi Clark, said, “We are so happy to celebrate Brother Joseph Dutton because now he has achieved the first level toward sainthood. And to have a lay person from Stowe [so recognized] is extraordinary.”

Brother Dutton would be the third saint who cared for the lepers on Molokai: St. Damien de Veuster and St. Marianne Cope are the others.

According to one of the attendees at the Stowe celebration, Sister Cheryl Wint of the New York-based Sisters of St. Francis of the Neumann Communities, St. Marianne’s order, “their sense of a penitential life and of community is part of our charism.”

Brother Dutton was born in Stowe, but his family moved to Wisconsin in 1847. He served in the Civil War and married in 1866. But his wife left him a year later, and he began a period he later called the “degenerate decade,” drinking heavily, something he later discontinued.

Brother Dutton was determined to do penance and atone for his “wild years,” and after studying the Catholic faith, he decided that being Catholic would best enable him to lead a penitential life.

He learned about Father Damien and the Kalaupapa leprosy settlement in Hawaii and decided to go to there to help carry on the work of Father Damien, who had been diagnosed with leprosy, and soon became an expert in caring for the patients’ medical needs.

Brother Dutton died in Hawaii in 1931.

Celebrating a 179th birthday is “an odd birthday to go big on,” he said, but the parish did so as a “way of honoring the new movement of raising up Brother Dutton” for canonization.