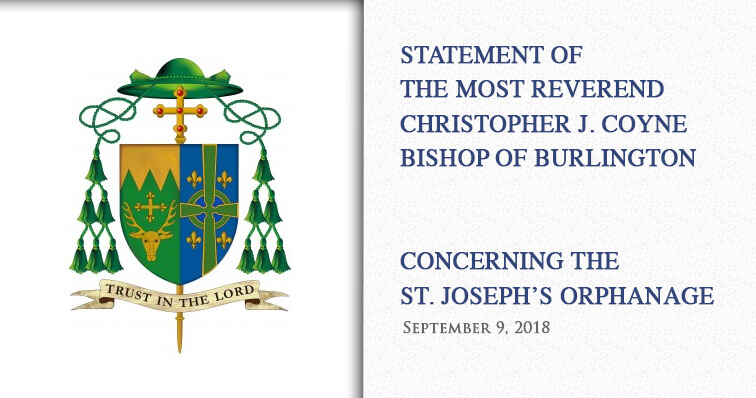 Almost 4 years ago, I was named the Bishop of Burlington. I remember being driven past the former St. Joseph’s Orphanage property on North Avenue and being told of its history: how it had been an orphanage run by the Sisters of Providence and then later run by Vermont Catholic Charities after the Sisters left; how it ceased to be an orphanage in 1974 and then became the headquarters for the Diocese of Burlington; how it was then sold to Burlington College in 2009 in partial settlement of legal claims against the Church. I was also told that a number of cases involving physical and sexual abuse against some of the orphans had been settled in the early 1990s.

Because I was not a resident of Vermont when the stories about the lawsuits and the allegations of abuse were first published by the Burlington Free Press in the 1990s, I had not previously heard the specific details of the allegations in those law suits. I became aware of those details recently when the media website BuzzFeed published a story which was a compilation of articles which had appeared in the Free Press in the 1990’s. The fact that those events happened over 50 years ago does not lessen the horror and grief we all feel at the thought of innocent and vulnerable children suffering abuse at the hands of those who should have cared for and protected them. Shining the light of truth upon the wrongs of the past can help us to continue our efforts to rid the Church of the darkness of sin and guard against the recurrence of wrongdoing.

I have read that local and state authorities plan to form a task force to investigate the allegations of abuse of children at St. Joseph’s Orphanage in the 1940s, ‘50s and ‘60s. I welcome the formation of this task force and I will do everything I can to help them discover the truth. The police and the law-enforcement agencies involved in the task force are doing their job in pursuing these matters. I offer to these authorities our cooperation and I pledge that the Diocese of Burlington will be forthcoming with anything that can be helpful in resolving the allegations about matters.

In the meantime, I am fully aware that there are survivors of abuse at St. Joseph’s Orphanage who are still alive and have much to tell me. I need to hear your stories, to apologize, to offer any help I can, and to listen to what you feel needs to be done to make sure, as much as humanly possible, that this never happens again. You are the ones who have been most personally impacted, and often gravely hurt, by the culture and structures of the church. You are the ones that I need to hear first to in order to change.  Over the next few days, I hope to set up a means for us to do so.

These days of crisis for our Church family remind me that the Lord who loves us so passionately and tenderly remains close by our side and will guide us in right paths. I am humbled to be your Bishop at this particular time with all of its challenges and I promise I will be with you at every step along the way.  May the Holy Spirit inflame our hearts anew with wisdom, courage and strength for the journey.