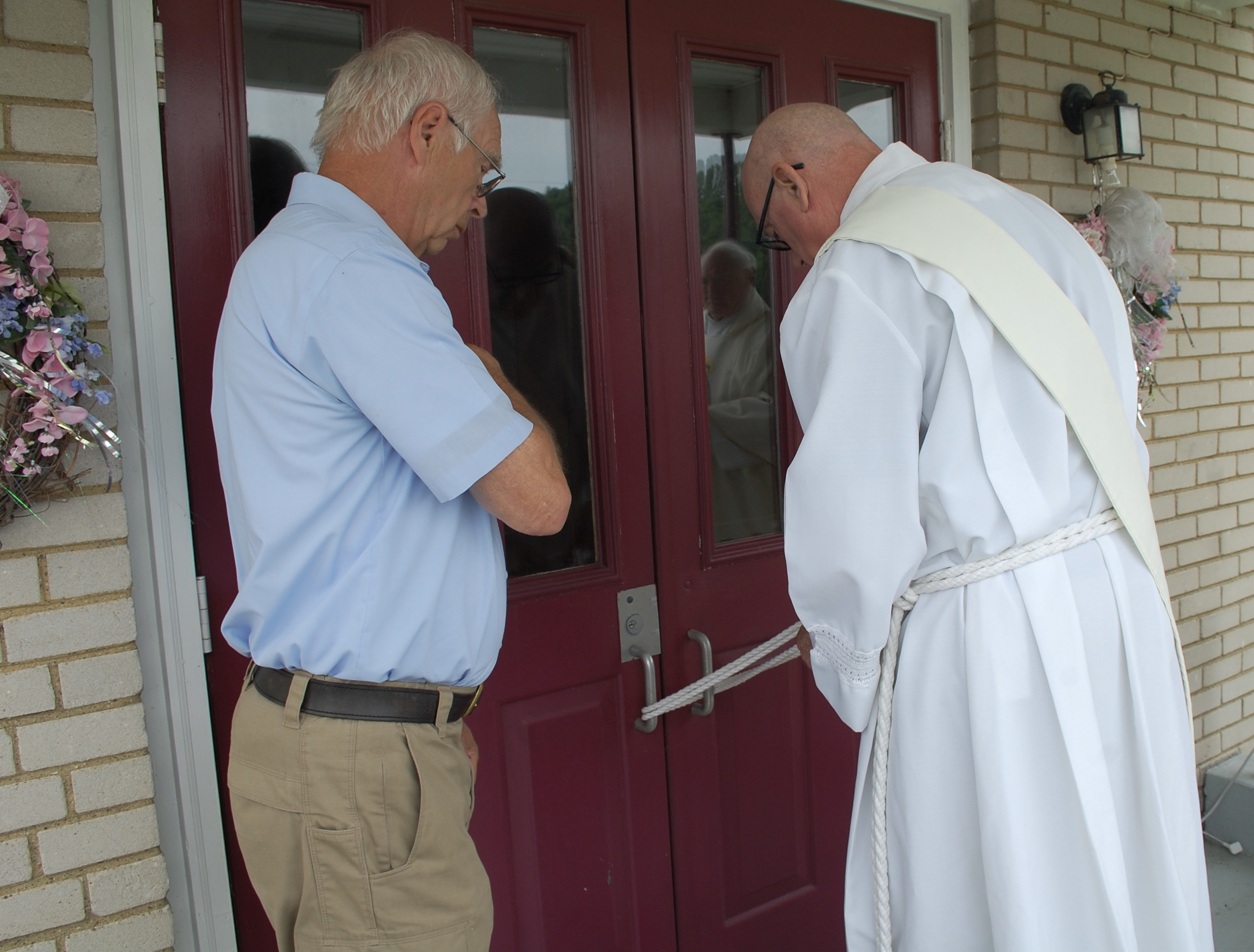 Lucille Fontaine Patenaude came from Michaud Manor in Derby Line to attend the last Mass at St. Benedict Labre Church in West Charleston, the church in which she was married in 1948.

Richard Labrecque of St. John Vianney Church in South Burlington, who served as an altar boy at St. Benedict’s in the 1950s, came too.

And Father Scott Gratton, a young priest of the Diocese of Burlington who received his First Communion at the church not too long ago, came to celebrate the final Mass.

It was a bittersweet day July 11 as those gathered smiled and laughed with people they had not seen in a while and wiped tears from their eyes as they left the church one last time.

“I love this church and grew in my faith so much in this church,” Father Gratton said in his homily, noting it is where he first thought of becoming a priest.

His grandfather, the late John Gratton, served St. Benedict’s as a deacon, and his grandmother and other family members attended the closing Mass.

Father Gratton spoke about St. Benedict, an 18th-century native of France known as “the beggar of Rome,” using him as an example of joy in belonging to God. And although it was sad to gather to celebrate the final Mass at the church named for him, Father Gratton reminded the church full of people that the Eucharist is celebrated throughout the world.

“It hurts to close a church … to think there won’t be new memories made here. … But we know who we are and to whom we belong,” he said. “You are a child of God, and you are filled with joy. … No one can take that joy from you.”

Members of St. Benedict Labre Church have been welcomed at the other churches in Mater Dei Parish.

Jeanine Morelli, a church member for 37 years, now goes to St. James the Greater Church in Island Pond, where she has been welcomed warmly. But it was sad for her to see St. Benedict’s permanently closed. The church meant “everything” to the former catechism teacher. But she felt better when she left the church after the closing Mass because of the encouraging homily Father Gratton preached and the spontaneous singing of “This is the Day” lead by former pastor Father Leo Bilodeau, one of a half dozen priests at the Mass.

The Mass included the reading of a brief history of the church and a letter from Burlington Bishop Christopher Coyne and remarks by the pastor, Vocationist Father Rijo Johnson.

As part of the ritual to close the church, Father Gratton processed to various parts of the church to offer thanks to God for the special celebrations and devotions the church community had throughout the years including to the baptismal font, statue of St. Benedict Labre, Stations of the Cross, confessional, ambo, statue of the Blessed Mother and altar.

He invited representatives of other parish churches to receive the holy oils from St. Benedict’s to be mingled with the oils of their churches as a sign that the journey of faith of members of St. Benedict’s would continue in the other churches. “The life of this community will continue in other places,” he said.

Two women snuffed out the candles on the altar and removed the altar cloth. Father Johnson processed out of the church with the Blessed Sacrament, and at the conclusion of the closing rites got into a black SUV to be driven to deliver it to St. Mary Star of the Sea Church in Newport.

The front doors of the church were closed and symbolically tied shut with white cord by Deacon Ward Nolan of Mater Dei Parish, and Father Gratton said: “In this building, we and those who have gone before us have celebrated the mystery of our faith and shared our joys and sorrows. In this church we have encountered Jesus Christ in word, sacrament and in one another but now (after) 75 years of faith and with gratitude to Almighty God for what He has allowed us to accomplish here, I declare this church of St. Benedict Labre closed.”

Patenaude, the Michaud Manor resident who was married to Joseph Patenaude in 1948 in the church, attended the luncheon in the parish hall that followed the Mass. They were the second couple to be married in the church, and they celebrated their 60th anniversary there. “I’m so happy to be here,” she said. “I wish my (late) husband was here.”

Labrecque, the former altar boy at the church who served as the cross bearer for the Mass, said it was an “emotional” day for him. He showed a visitor his rosary on which he had put a small crucifix given to him when he was an altar boy by then-pastor Father Armand Fortin, in the late 1950s. “This church has a lot of meaning,” he said.