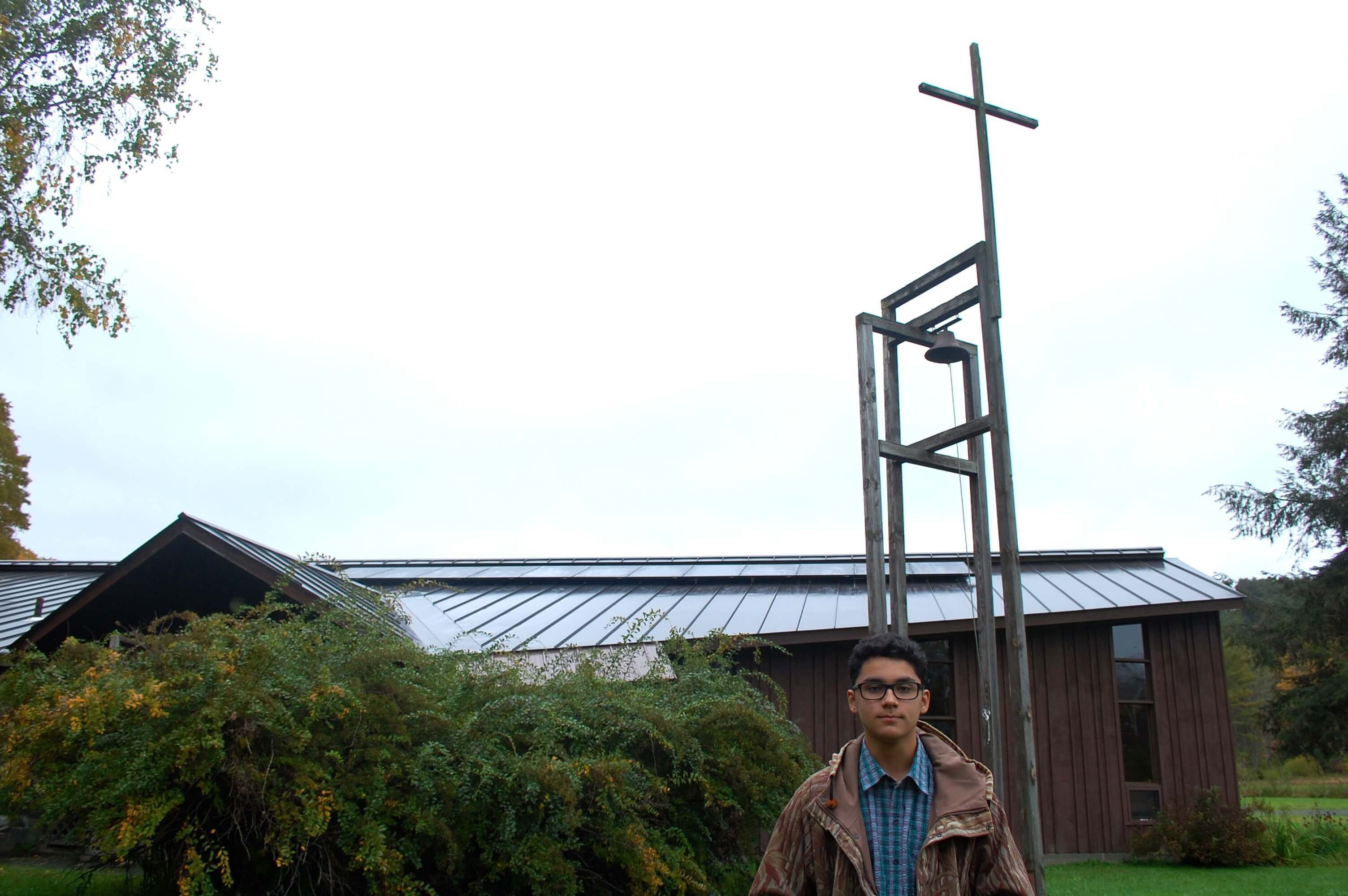 Photo Credit: Vermont Catholic/Cori Fugere Urban - Sixteen-year-old Dominic Scanlan stands outside St. Francis of Assisi Church in Norwich which now has a solar array thanks to his efforts.

Solar panels at St. Francis of Assisi Church in Norwich

It would seem that St. Francis of Assisi himself might have had a hand in Dominic Scanlan’s confirmation service project.

But it was Dominic’s service project that really united him with the founder of the Franciscan Order who born at Assisi in Umbria in 1181.

The eldest of three children in a family that takes care of the Earth seriously, Dominic considered several confirmation service projects before deciding to secure solar panels for the small, wood-frame Norwich church.

“I wanted to help my church because I knew the electric bills were pretty expensive,” he explained.

The church electric bills had been totaling about $1,000 a year.

But thanks to the efforts of Dominic and his supporters, that cost is expected to be eliminated.

Because his family benefits from electricity produced by solar panels, Dominic understands how solar energy works and benefits the Earth as a clean, renewable resource.

The son of Melissa and Martin Scanlan, Dominic began the project in the spring and sought donations to pay for it. The Jack and Dorothy Byrne Foundation of Hanover, New Hampshire, quickly responded with an $8,000 donation, and he raised the rest of the needed $12,000 from parishioners’ donations.

He met with three companies to get a bid from each and worked with the parish council to secure needed permits and permissions including from the Diocese of Burlington’s building committee to move forward with the project.

“We were all unified around the project and very supportive,” said Doug Sonsalla, parish council chair who helped Dominic facilitate the process.

“This was a fantastic project Dominic did and a great way to give back to the church,” he said. “The project really has a significant benefit not just to our church but to our planet and echoes what Pope Francis has been talking about [regarding] care for the planet.”

Last year the Diocese of Burlington celebrated a Year of Creation in response to the pope’s “Laudato Si’” (“On Care for Our Common Home”) encyclical.

In September, Norwich Technologies installed 12 panels atop the church.

Asked how he felt about the project, Dominic simply replied, “Pretty good.” Asked about the anticipated savings of $30,000 over 30 years, he said he felt “excellent” and smiled broadly.

Over 30 years of operation, it is estimated that the church solar panels will avoid 106,535 pounds of carbon emissions, the equivalent of the amount of carbon pollution from burning 20.8 tons of coal, 112.4 barrels of oil or 5,417 gallons of gasoline. This system should produce enough electricity to power all of the church’s needs and perhaps generate credits to be shared with others.

There is room on the church roof for more panels, so in the future more could be added.

As part of his confirmation preparation, in addition to a service project, Dominic was required to write a two-page essay about a saint, and he chose St. Francis of Assisi. “He really made me think about the Earth and trying to make a difference,” he said.

St. Francis and Dominic’s confirmation project “merged together” well, said the junior at Hanover High School across the Connecticut River in New Hampshire.

Active as a cross-country runner rock climber and children’s beginner snowboard coach, Dominic has been and altar server and lector at St. Francis of Assisi Church.

Faith is important in all he does, and he is aware of God in all things, he said. “People who don’t have God in their life miss out on hope and strength and the faith experience.”

He said he chose his church as the beneficiary of the service project efforts because it is a place he where he has made friends and where he has “a connection to God.”