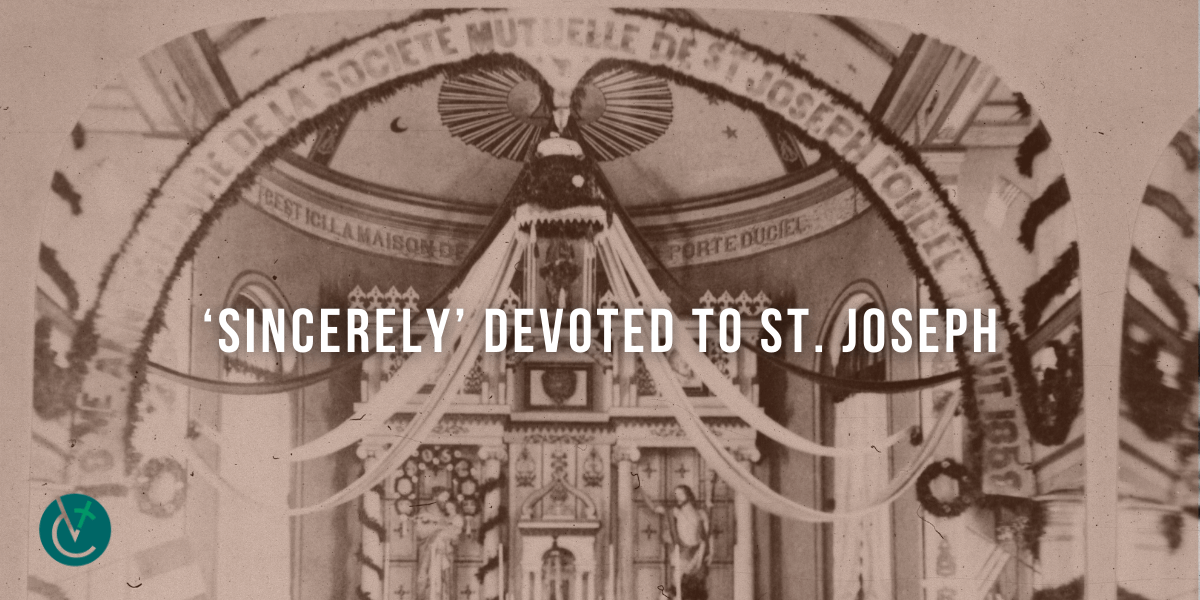 On Dec. 8, 1885, Burlington Bishop Louis deGoësbriand completed an historical work of famous Vermonters and New Hampshirites entitled “Catholic Memoirs of Vermont and New Hampshire.” It is a 166-page book in which he recounts the conversion of notable Catholic converts of the 18th and 19th centuries with whom his contemporaries would have been familiar.

While some names have fallen into obscurity for us, one would hope that, at least, every Vermonter would be familiar with the name of Sister Fanny Allen, a Religious Hospitaller of St. Joseph. The bishop’s primary objective, however, was more than just historical. He wrote, “The following pages have been written with a view to promote devotion to St. Joseph and also with a desire to preserve the memory of graces received through his intercession in the Diocese of Burlington.”

In the pastoral solicitude, for which he is renowned, he emphasizes devotional aspects of veneration of St. Joseph throughout the various strata of Vermont society: “It thus happens that all the memoirs of St. Joseph are full of sweetness to well-instructed Christians. Fathers and mothers love to place their children under his protection. The laboring men who earn their bread at the sweat of their brows, consider him, as it were, one of their own. They who are tried by poverty trust in the prayers of Him who was the purveyor of the Holy Family, and the sick and the dying feel that the foster-father of Jesus and husband of Mary cannot fail to obtain for themselves a happy death. There is another class of persons who love to implore the protection of St. Joseph. We refer here to missionary bishops and priests and to religious communities who devote themselves to the introduction and preaching of the Gospel in foreign countries.”

Bishop deGoësbriand enumerated the blessings of devotion to St Joseph dating back to the establishment of St. Mary Church in Burlington by the missionary priest Father Jeremiah O’Callaghan who maintained a statue of St. Joseph, which still was preserved in 1885. After building the original Cathedral of the Immaculate Conception in 1867, Bishop deGoësbriand dedicated an altar to the Holy Family.

St. Joseph even had his own “property” in Burlington, called St. Joseph’s Hill, where the former St. Joseph Church had been built in 1852 for the French-Canadian Catholics. This is the area around what is now St. Joseph’s Home off North Prospect Street.

In 1854, when the Sisters of Providence opened the original St. Joseph’s Orphan Asylum, the children prayed daily the Litany of St. Joseph to obtain his protection but also the necessary funding to run the orphanage. As patron of the dying, two cemeteries on St. Joseph’s Hill are named after him. The bishop also states with pride that many religious and priestly vocations found their birth at St. Joseph Church and school up on St. Joseph’s Hill.

Finally, the bishop, viewing the construction of the present Cathedral of St. Joseph from his rectory on Cherry Street, wrote: “But as we write these lines the congregants of old St. Joseph’s Church are erecting a new St. Joseph’s Church edifice, which cannot but be seen by anyone who approaches Burlington. … The great dimensions of this building and the privations which the people cheerfully undergo to complete it show to evidence how sincerely devoted all our people are to St. Joseph.”