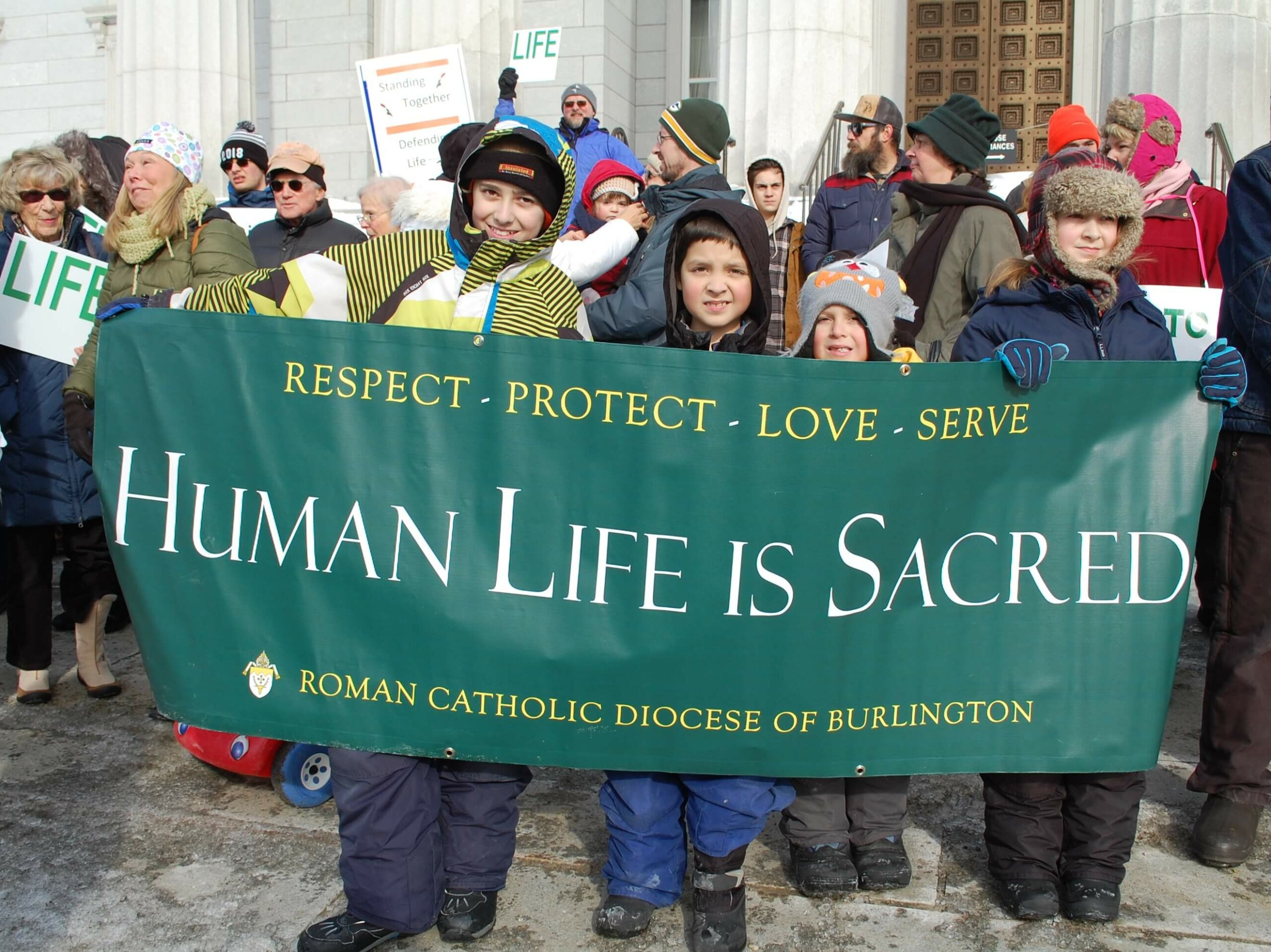 Photo Credit: file: Vermont Catholic/Cori Fugere Urban - Members of the Lawson family of St. Luke Parish in Fairfax hold a banner in front of the Statehouse in Montpelier during the annual Rally for Life.

A reported 500 people rallied for life Jan. 26 in Montpelier, with about 200 of them first attending a Respect Life Mass at St. Augustine Church, celebrated by Burlington Bishop Christopher Coyne.

“We could look at our culture and see so many things that are counter to life,” he said in his homily, offering as examples physician-assisted suicide and legislative efforts to recognize abortion as a fundamental right and protect in statute the right of reproductive health choice. “But there is cause for hope.”

Among the reasons to be hopeful in the current culture is the fact that so many people gathered in Montpelier to promote respect for life from conception to natural death, he continued.

He also finds hope in families that nurture faith and a respect for life and in Jesus Christ, the “master of life.”

He encouraged members of the congregation to build the Gospel of Life.

After Mass, they gathered outside City Hall with others and then, an estimated 500 strong, they walked to the Statehouse where they rallied for life and listened to a speaker, Ann McElihenny, who, along with her husband, Phelim McAleer, produced the movie “Gosnell: The Trial of America’s Biggest Serial Killer,” based on their New York Times bestselling book.

Bishop Coyne led the opening prayer for the standing-room only crowd in the House of Representatives.

In her address, McElihenny said she had been “comfortably neutral” about abortion; “but that means pro-abortion because you can’t be neutral on the issue,” she said. “It was complete ignorance.”

But her stand changed when she learned of the practices of Philadelphia abortionist Dr. Kermit Gosnell who was convicted for the first-degree murder of three babies born alive and the involuntary manslaughter of abortion patient Karnamaya Mongar. The investigation brought to light further information about unsanitary operations, use of untrained staff and use of powerful drugs without proper medical supervision and control.

“It was so shocking,” McElihenny said of what she learned about Gosnell. “For most of us, evil is rather theoretical. … When you come close to it, you know it.”

She hopes that people will become informed about just what abortion is and how unborn children feel pain during the abortion procedure. “The biggest enemy of the abortion debate is ignorance,” she said.

According to a Vermont Right to Life Committee email, the Gosnell story has become important for Vermonters to know as the legislature prepares to pass H.57, legislation making it explicit in Vermont law that abortion is legal throughout all nine months of pregnancy for any reason, and no parental notification is required for a minor daughter to have an abortion.

The bill, an act relating to preserving the right to abortion, was introduced on the House floor by Reps. Ann Pugh, D-South Burlington, and Maxine Grad, D-Moretown, with 89 tripartisan co-sponsors.

Jan. 22 marked the 46th anniversary of the “horrendous” U.S. Supreme Court decision that legalized abortion, and an estimated 60 million babies have been aborted since, said Mary Hahn Beerworth, executive director of Vermont Right to Life Committee Inc., sponsor of the day’s events.

Among those at the Mass and Statehouse address was Jackie Becker of St. Luke Church in Fairfax. “Of course as a Catholic Christian I think of respect life from conception to natural death and all life as sacred,” she said.

One or the five priests who celebrated the Mass with the bishop was Father Paul Sebastian, parochial vicar of Most Holy Trinity Parish in the Barton area. “I came as a mark of solidarity for the people fighting for life,” he said. “All life is precious and a gift from God.”

The Rally for Life at the Statehouse was followed by the first showing of the Gosnell movie in Vermont, at the Capitol Theater.

For more information about Vermont Right to Life, go to vrlc.net.