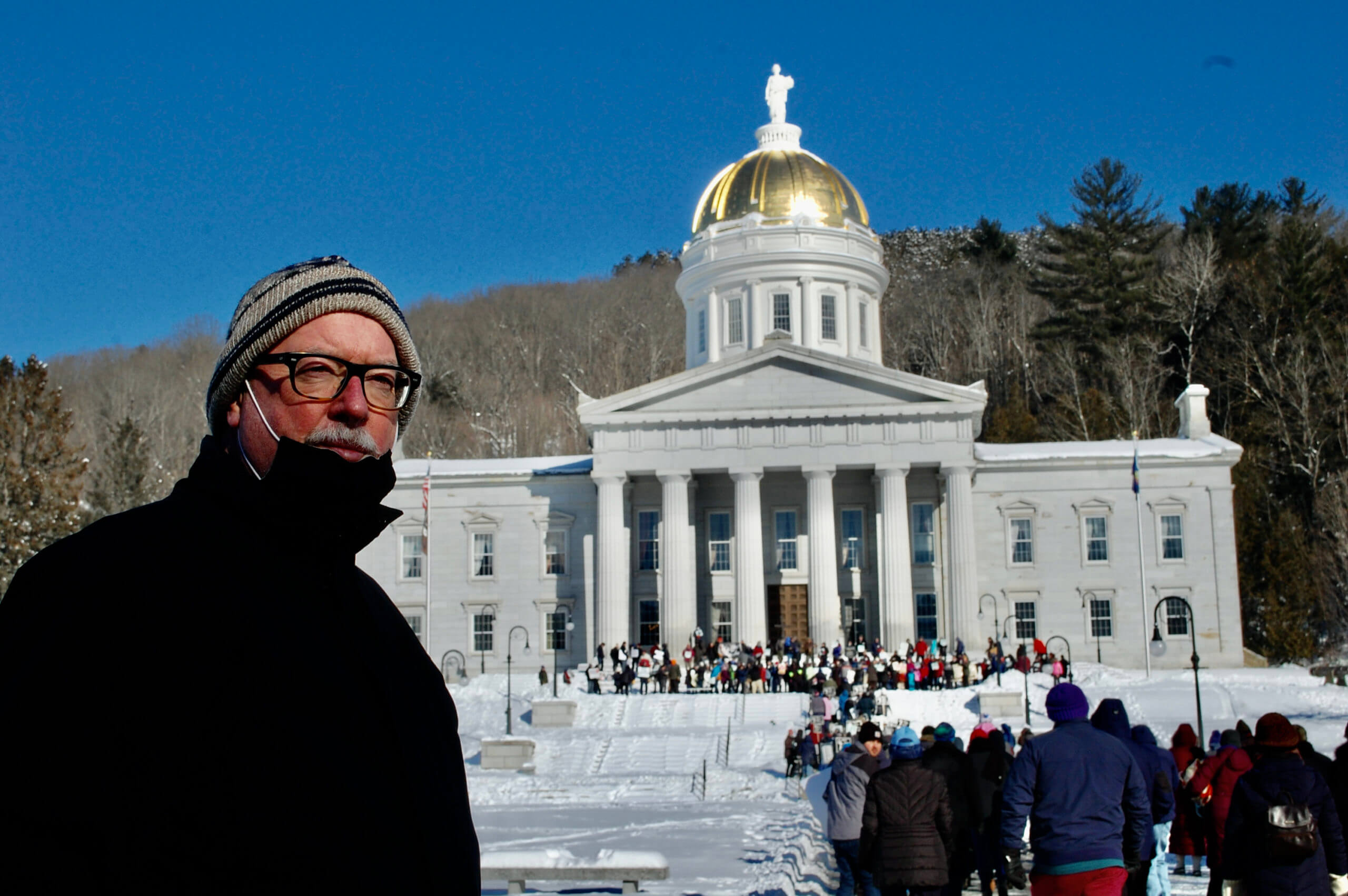 Photo Credit: Cori Fugere Urban/Vermont Catholic - Burlington Bishop Christopher Coyne greets participants in the Rally for Life as they make their way to the Statehouse.

Hundreds of pro-life Vermonters gathered in Montpelier Jan. 22 for what was called perhaps the largest gathering of its kind in the capital city to pray, march and learn on the 49th anniversary of the landmark US Supreme Court decision in Roe v. Wade. It ruled that women in the United States had a fundamental right to choose whether to have abortions without excessive government restriction and struck down Texas’s abortion ban as unconstitutional.

“While no one can accurately predict what the US Supreme Court will do, pro-lifers feel that finally the spotlight is shining on the humanity of the unborn and discussions now center on how early little hearts are beating,” said Mary Beerworth, executive director for 26 years of the Vermont Right to Life Committee Inc. “We will see what the US Supreme Court decides to do.  Pro-lifers will always remember the 63 million babies who have lost their lives” to abortion since it was legalized.

The right to life committee has sponsored the Rally for Life since the earliest days of the pro-life movement, mirroring the national March for Life that takes place in Washington, D.C., in January.

Beerworth said this year’s event could be the largest Rally for Life in Montpelier as hundreds of people — mostly adults but a few children too, some carrying pro-life banners and placards  — dressed in cold weather apparel gathered for a photograph on the steps of the Statehouse on a sunny, 0-degree day.

This year’s Rally for Life in Vermont’s capital city included a Respect Life Mass at St. Augustine Church and a prayer serviced at Lighthouse Christian Church, both in Montpelier. Part Two of the day’s activities was the march from City Hall to the Statehouse.

After a luncheon at the Capitol Plaza, there were workshop given by Vermont Right to Life Committee staff members on updates regarding Vermont’s Proposal 5 to amend the state constitution to ensure that every Vermonter is afforded “personal reproductive liberty.”

While the U.S. Supreme Court considers the case that could potentially overturn Roe v. Wade, some states, like Vermont, are enacting or discussing protections for reproductive rights. Prop 5 is an amendment that would enshrine “reproductive autonomy,” including abortion, in the state constitution. If ultimately passed by the state legislature, the proposal could go before voters in November.

“If Roe v. Wade is overturned, the matter returns to the states to set abortion policy. In Vermont, that policy is set,” Beerworth explained. “Act 47 legalized unlimited, unregulated abortion through all nine months of pregnancy. We are currently fighting a push to embed unlimited abortion in the Vermont Constitution.”

She said Vermont Right to Life and pro-life Vermonters “have an uphill battle ahead for years to come.”

In his homily at the Mass, Burlington Bishop Christopher Coyne said the nation is “beginning to move the dial back in terms of recognizing the child in the womb as a person who needs protection.” But he expressed concern about Prop 5, which he said would “enshrine in a nebulous way” the right to reproductive rights.

He called on those seeking to protect the rights of the unborn to “be educated” and to share correct information so if voters are to cast their vote on Prop 5, they will be correctly informed.

He also encouraged his listeners to interact with those of opposing views to begin with a foundation of love of God, communion and charity.

He thanked them — and specifically Beerworth — for their “faithful witness” for life from conception until natural death and urged them to “spread the word of life, the God of life.”

Beerworth has been involved in the pro-life movement since the mid-1980s. Since then, she has seen pro-lifers expand their concern for both mothers and their babies into pregnancy support centers.  “There are 11 centers around the state that offer supportive care to young girls and women experiencing an unexpected pregnancy,” she said. “Sadly, a bill has been introduced to try to shut the centers down since they do not offer abortions (H. 634).”

Among those at the Mass for Life were Wendy and Al Covey of Assumption of the Blessed Virgin Mary Parish in Middlebury. This was their first Rally for Life, and they participated because of their opposition to Prop 5 and to “show support in numbers,” she said.

Prop 5 “carries things way too far,” he said, echoing the bishop’s call for members of the pro-life movement to show those with opposing views “love as our brothers and sisters.”