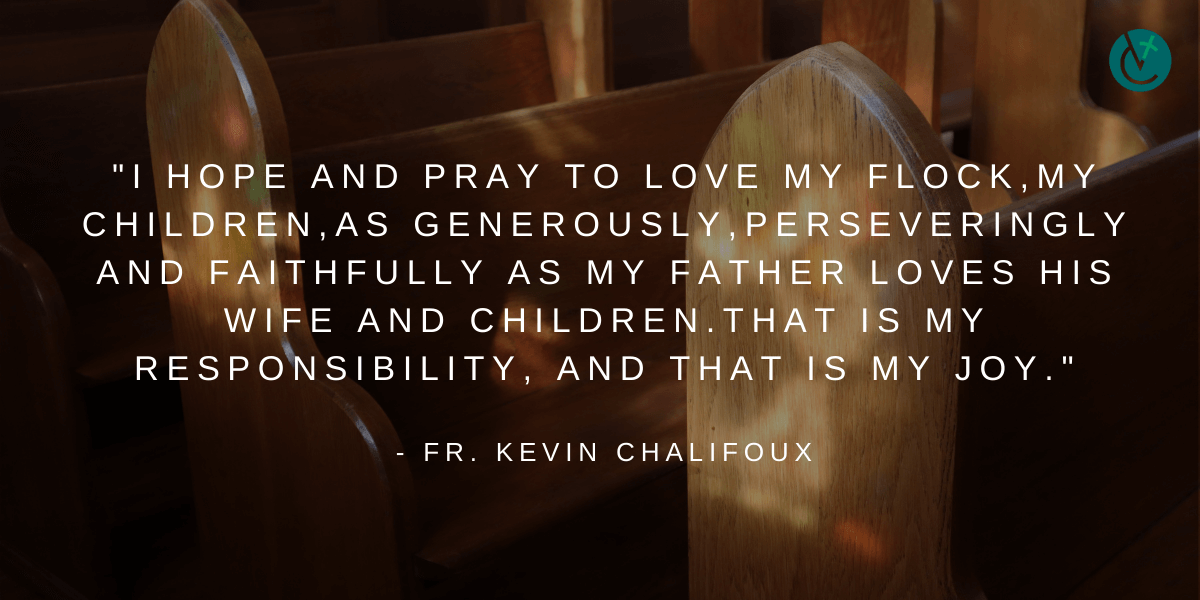 Priest learned importance of ‘fidelity to responsibilities’ from his father

Before his son ever mentioned a desire to become a priest, Kevin Chalifoux of Spencer, Massachusetts, had no inkling the young man had such a vocation.

He knew this son — one of his three children — was a devout Catholic, but as a student at the University of Vermont, he landed an internship with a world-renowned environmental remediation company and had a job offer there pending his graduation.

“This is the dream of a parent to see one’s child with a clear career path.  A vocation to the priesthood came as a surprise,” Mr. Chalifoux said. “The uncertainty of the path forward following this calling [to the priesthood] weighed upon me, but surprisingly not on Kevin [his son]. His confidence in his calling gave me confidence that this is God’s plan for him.”

Father Kevin Chalifoux, 29, was ordained a priest of the Diocese of Burlington in 2019; he currently serves as parochial vicar of Holy Angels and Immaculate Conception parishes in St. Albans.

As his decision to pursue further discernment of the priesthood began having real effects in his life — such as ending a romantic relationship with a woman and telling the environmental company that he did not plan to work there after graduation — his parents’ concern was understandable and led to helpful conversations. “Ultimately, they trusted me when I explained that though I had gone through various phases in my life before, I was no longer acting as a child moved by passion and emotion,” Father Chalifoux said. “I was a young man at that point, not running to and fro with reckless abandon but instead seeking the good counsel of priests, prayerfully and carefully considering the possible path that stretched before me and making a quite deliberate and sober decision, though there still remained plenty of zeal and passion in need of maturing and purifying.”

Mr. Chalifoux sees his son striving to live his life by example and taking seriously his responsibilities to others: “He loves being a priest … and wants and always tries to do his best and be the ‘father’ God has called him to be.”

He has modeled faith for his son by never allowing difficulties and challenges to be a reason to turn away from faith or become resentful, choosing to be grateful for all that they have rather than focusing on what they don’t. “There was never a reason to miss our Sunday obligation as a family, including always dressing for Mass and being reverent and respectful in Church,” he said.

As a father, Mr. Chalifoux wanted to teach Father Chalifoux to be responsible, to be resilient, to lead by example and lifestyle, to think with his mind and work with his hands. “I wanted to teach him to be unselfish and always try to do the right thing, to do right by people and to value and maintain connections with family.”

He leads by example and show him the importance of hard work and perseverance. “I guess what it comes down to is that I tried to teach him to live by the Golden Rule: always treat others as you would have them treat you,” he said.

While it would be insufficient to say that his father taught Father Chalifoux the supreme importance of being faithful to one’s duties and responsibilities as a father, as if he was simply a man out to “do his job” in cold obedience to duty, “I would say that one of the most important things his life has demonstrated is that fidelity to our responsibilities is a necessary foundation upon which our lives are built,” the young priest said. “My father taught me, through his example, that it is in faithfulness to our responsibilities, in season and out of season, whether we are thanked for it or not, that we will know peace and joy and we will live out the love that we have for our vocation.”

He tells the Lord every day how much he loves His priesthood and his vocation to it above all by living it, by being faithful to that to which He has called him. “So it is that in the face of the manifold crises of today, the apostasy, the confusion and the fear, that I still know deep and abiding peace in my vocation; because I know, generally speaking, what I must do each day if I wish to be a faithful priest, which is all that matters,” he said — piously pray the Divine Office, reverently offer the Holy Sacrifice of the Mass in atonement for the sins of mankind and for the salvation of souls, make himself generously available for confessions and counsel souls in the life of grace and virtue, tend to the sick and dying and ensure that those entrusted to his care die in the arms of Holy Mother Church, teach the truths of the faith with clarity and love — especially through well-prepared homilies — care for the poor and the afflicted and model holiness through a consistent life of prayer and virtuous living.

“I learned from my father that diligence to these duties, far from being a cold and heartless way of relating to those entrusted to our care, is precisely how I demonstrate my love for them,” Father Chalifoux said. “I hope and pray to love my flock, my children, as generously, perseveringly and faithfully as my father loves his wife and children. That is my responsibility, and that is my joy.”