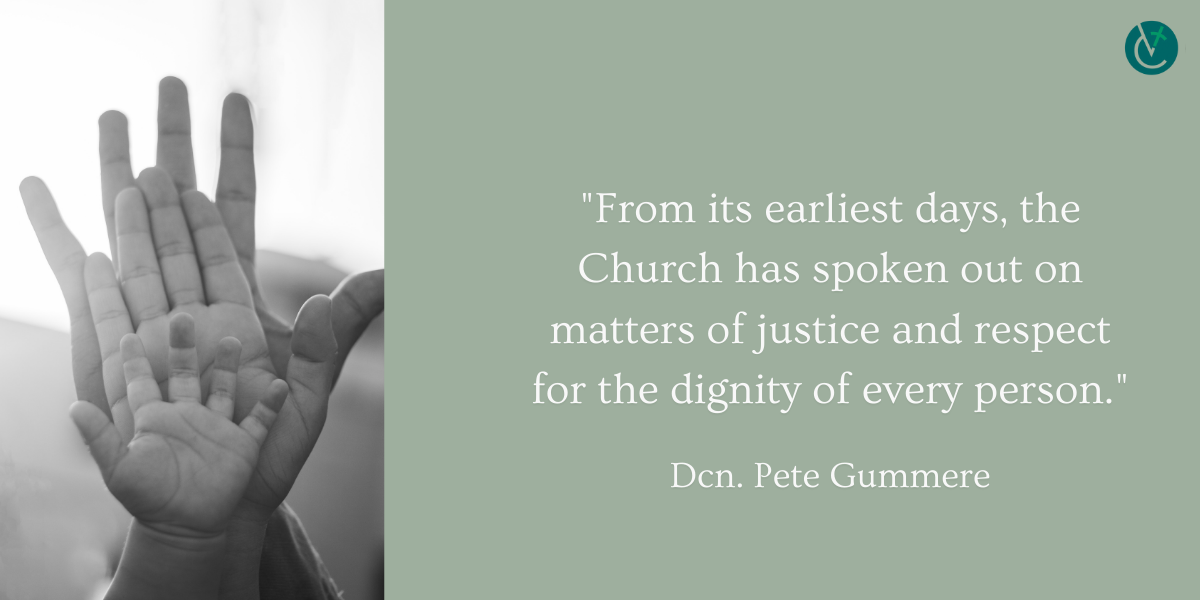 Recently, several people asked me why the Church is so involved in politics that we speak out openly on issues like Article 22, the proposed Reproductive Liberty Amendment to the Vermont Constitution.  In response, I note that this is a matter of justice.

From its earliest days, the Church has spoken out on matters of justice and respect for the dignity of every person.  Recall that throughout the scriptures justice was a significant and recurring theme. Justice for the oppressed was a major theme in the writing of the prophets. These themes were reiterated in the Gospel and the New Testament letters.

Justice has been a prominent theme in American history and in the history of civilization.  Lest we forget, the United States was founded out of zeal for justice. The Civil War was fought over a matter of grave injustice against African slaves. World War II was fought in no small measure as a result of grave injustice being perpetrated by two major world powers (Nazi Germany and the Empire of Japan.) Those injustices were condemned by the Church.

The Church has been a genuine force for justice in many other arenas.

One notable example in my lifetime was the strong condemnation of racial segregation and discrimination in the United States. In his 1963 Letter from the Birmingham Jail, Dr. Martin Luther King commended some early actions by Catholic leaders in the state of Alabama for their initiatives, specifically in voluntarily integrating Spring Hill College.

Other examples of the Church’s efforts in the arena of justice were just wages and working conditions for workers here in the United States as well as in other countries.

When big, powerful humans decide to extinguish the life of little, tiny, powerless humans, it is a matter of injustice. The Church cannot fail to speak out and to act against such actions.

At the same time the Church must also help those women who find themselves carrying an ill-timed pregnancy. I am convinced that women do not make the decision to abort a pregnancy lightly. They need help in many dimensions of their life. The pregnancy support centers throughout the state provide such help. These centers are supported by churches and individual donors in the surrounding area.

The proposed Article 22, the Reproductive Liberty Amendment, is seen by the Church as a device that would perpetuate a particularly vile injustice, the killing of innocent and helpless unborn babies. But Article 22 is not limited to abortion by design of the authors.

For laws to be just, they must be clear. Using language that is vague or ambiguous is an invitation to litigation. It appears that is what proponents wanted. When questioned in a House hearing, Sen. Ginny Lyons stated quite clearly that the writers of the proposed amendment wanted to leave the interpretation of the amendment up to the Supreme Court. She also noted that the court would have the leeway to approve new technologies in the future.

Was this article an evasive and devious way to get prostitution legalized through the courts, an action that would surely perpetuate abhorrent injustice and abuse upon those who would fall prey to such trafficking?  Eliminating prohibition of prostitution also came up as a bill in the past legislative biennium.

The Church must speak out against dangerous and unjust trends, particularly when enacted into law.

Would those wanting the Church to be silent on the issue of Article 22 advocate for a complete reversal of the human progress in the areas of racial justice, just wages and safe working conditions because the Church had been active in those arenas? Of course not!

I will personally vote “No” on Article 22 in November; I will do so with a very clear conscience.

—Deacon Pete Gummere is a bioethicist and serves in Corpus Christi Parish based in St. Johnsbury.