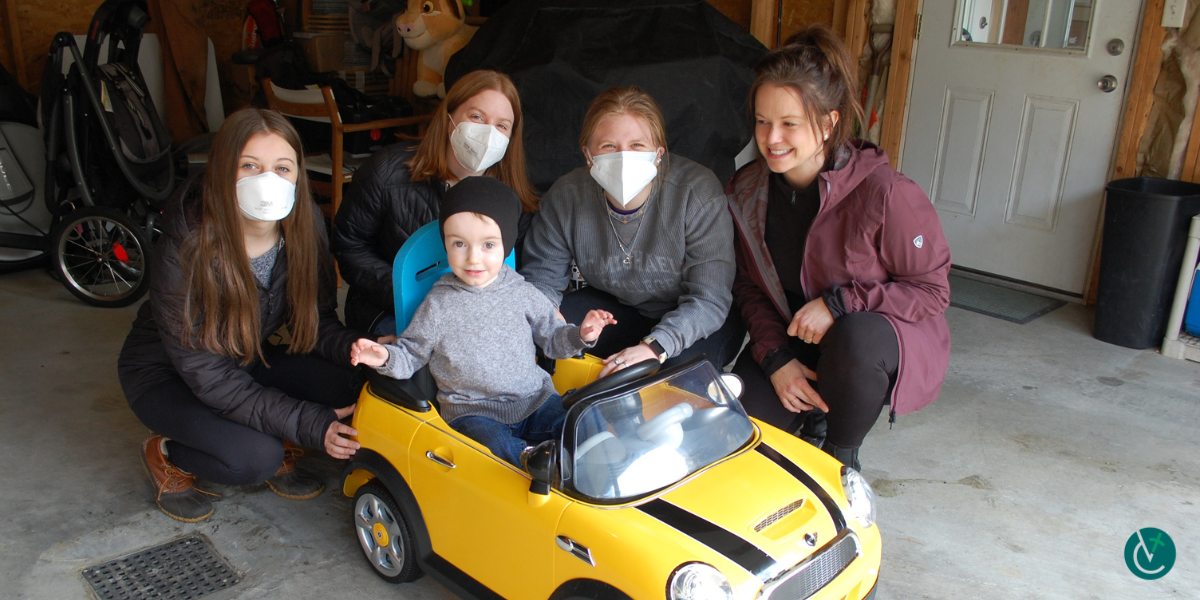 Riley Pinard is a nearly 3-year-old boy with two sets of wheels: an Explorer and a Mini Cooper.

Both vehicles are battery powered; the mini Mini Cooper is a new means of transportation for the boy who has a form of congenital muscular dystrophy.

His first set of wheels, a Permobile Explorer Mini — a developmentally inspired power mobility device — was purchased commercially and is primarily used in the Pinard Family’s Albany cape home, which they share with boxer dog Grace and yellow cat Sunny.

But the mini Mini Cooper, delivered March 25 by three students from the Go Baby Go club at St. Michael’s College in Colchester, has greater capability to get Riley from place to place outside in the yard, in the gravel driveway or come fall, at preschool.

Riley is unable to walk and is still small enough to be carried by his parents, Michael — a salesman — and Sandra — a radiology technician — parishioners of Mater Dei Parish’s St. Mary Star of the Sea Church in Newport. They are in the process of getting him powered and manual wheelchairs.

“With pre-K in the fall, independent mobility is super important,” Mrs. Pinard said.

Though Riley — who likes cars and trucks and enjoys playing with friends — has physical development issues — diagnosed when he was four months old — he has no cognitive delay. “He’s actually doing really well,” his mother said.

As his mother spoke to a visitor, Riley drove the blue and yellow Explorer model up and down the main hallway, into the kitchen and dining areas. “He can drive super well,” she said, smiling at the boy dressed in a black hat, gray hooded sweater, jeans and Velcro and lace ties shoes.

The family learned about the Go Baby Go program at St. Michaels through word of mouth. “The more I learned about it, the more awesome it sounded,” Pinard said.

Because of the Covid-19 pandemic, the students working on the car could not meet Riley to see exactly what his needs were, so the project was delayed.

“Do you want to get in?” Best asked the boy as they looked at the car in the two-car garage, big enough for him to take his first drive. Riley nodded, and his mother put him in the only seat, his hand immediately holding onto the shifter. “This is exciting,” Henry enthused; Riley nodded.

After patiently waiting to be buckled in, having his seat adjusted and listening to Best explain safety measures, Riley took his first drive. “I’m happy it works! That makes me happy,” Best said.

“It’s cool to see him finally using it and see our work pay off,” Henry said.

Go Baby Go has about 10 members at St. Michael’s College. Part of a national club, its objectives are to develop low-cost, safe mobility devices for children between the ages of 3 and 8 years and to create opportunities for St Michael’s students to learn and demonstrate the engineering skills required to make simple electrical adaptions.

The club also seeks to create opportunities for students to engage with children with special needs and their families to solve mobility issues.

Once Riley grows out of the car, it will be returned to the club to be fitted to another child.

The club, begun in 2015 at St. Michael’s, has put 10-20 battery-operated vehicles into use, with about a half dozen in use now, Best said.

Pinard said she prays every day for her son; she prays for his mobility independence. “All any parents want for their children is for the to be healthy and have independent mobility,” she said. “Being a part of this program is a gift to Riley.”

A resident of Pray Drive, she said the program has been an answer to prayer, but she will pray throughout his life for his independent mobility.

But she acknowledged that her prayer in this regard would not have been answered without the help of Go Baby Go, a program funded by donations to defray the cost of the vehicles. (Best estimated the cost of Riley’s at about $400.)

Best agreed that prayers cannot always be answered unless people are willing to help God answer them. “This is important at St. Michael’s. This is one of the values instilled in the students.”

Pinard said faith is important to her and her extended family, and she never wants to lose her faith and sense of hope: “That is going to be really big in Riley’s upbringing.”

Meanwhile Riley has his new wheels and was looking forward to cruising around his yard, independently mobile.

“We’re just so thankful and excited for Riley,” Pinard said.