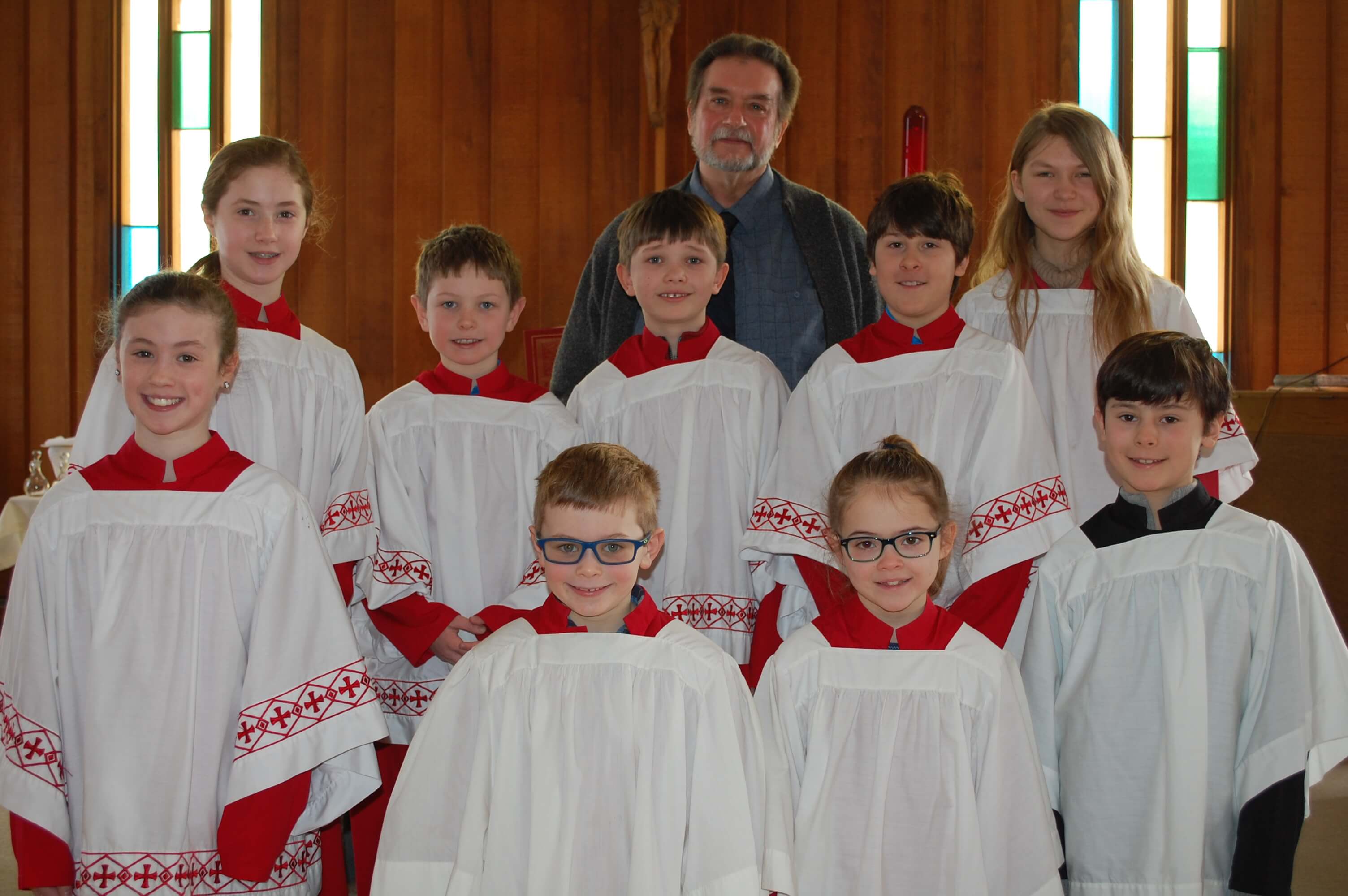 Photo Credit: Vermont Catholic/Cori Fugere Urban - Edward Mekus, organist and choir director at St. Francis of Assisi Church in Norwich, stands in front of the altar with members of the children’s choir.

Choir members at St. Francis of Assisi Church in Norwich are, in many ways, like choir members in every other church: They all like to sing.

Some of the more experienced singers help others; some study music. Some like to sing in Latin, and a couple sing louder than others.

They all have favorite songs: Ben Gentine likes “On Eagles Wings,” and Jacobi Marotti likes “City of God.”

And when it comes to working on their music, “we definitely get better when we practice,” said Elisia Sonsalla.

Sounds pretty common, but what is uncommon about this choir is that the members are all children.

Dressed in cassocks and surpluses, the 11 children in the choir lead the music at the Sunday morning Mass at this small, rural church not far from the New Hampshire border. “I like the church songs,” said Nora Bradley, 12. “They’re pretty, and you don’t usually hear them on the radio.”

Edward Mekus, the organist and choir director, began the children’s choir more than three years ago as a way to get young parishioners involved in their church. With two short pews acquired from another church and refurbished, he made a permanent spot for the choir next to the organ at the front of the church. “You have to get them involved and have a place for them to keep coming,” he said.

He works with them on music adult choirs sing, not traditional children’s Mass songs because that is the music they want to learn. “You’ve got to have good music and good homilies to bring people in [to church],” he said. “You should walk out and have the joy and peace go with you all week.”

On a recent Sunday morning, the children were rehearsing with Mekus when a woman entered the church and whispered, “Oh how cute!” when she saw them. Several parents sat in the pews during the pre-Mass rehearsal, smiling as they watched the children.

Jacobi, 10, said what he likes best about being in the choir is being closer to the priest than he would be if he sat in the pews: “I feel more part of the celebration.”

Jacobi said singing is “kind of like praying but you’re singing it loudly.”

But it’s not all about singing. Elisia, 12, said choir members put their faith into action there, treating others with respect and love. “You have to be in the moment and help people if they don’t have the page and find a quick way to help them,” she said. “It’s the same as you’d do with your friends and family.”

Asked about other qualities being in the children’s choir fosters, the members were quick to list them: being patient, following rules, being kind and respectful, not talking when others are talking and not being embarrassed to be in front of people.

Molly Gentine has two sons in the choir. “I like that they are excited to come to church, and they like to get here early and like the music,” she said, adding that they have made good friends in the choir.

Emily Bradley, who has two daughters in the choir, said church involvement is a family tradition. Though it can be challenging to manage busy schedules to include Sunday Mass, she said it is a special priority: “It’s a time to be together and be reflective.”

A good portion of the small mission church of Our Lady of Perpetual Help Parish in Bradford is made up of young families like these, and Bradley said it’s a “teeny, tiny church that has a young people’s spirit, and it’s wonderful.”

Doug Sonsalla, parish council chairman and father of two of the children’s choir members, is pleased they participate because they have a level of engagement in the parish that they might not get if they sat in the pews: “Being in front gives them a role in the Mass different than in the pews.”

Aside from being followers of Jesus and members of the early Christian community, Titus and Timothy [...]