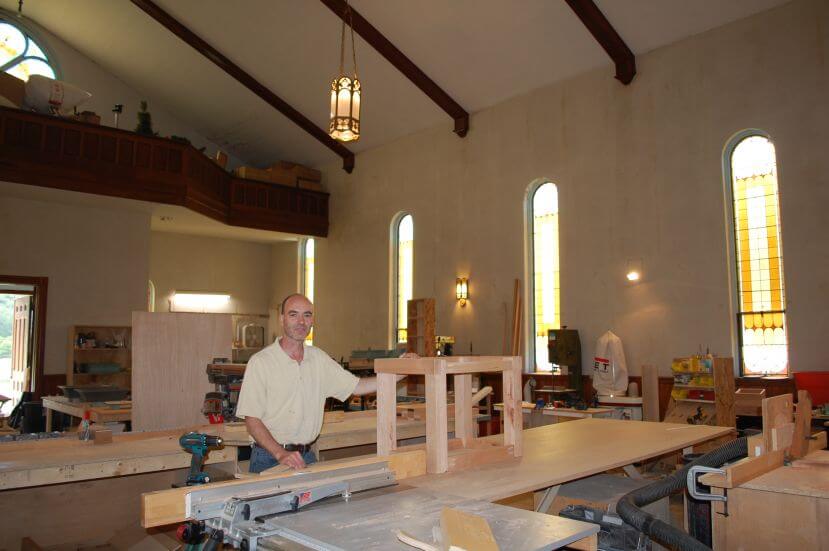 When a church closes – no matter what the reason – it’s obviously difficult for its members. Sometimes former church buildings become a parish center when a new church is built or serve a larger, merged parish as a social center. Many former churches have been sold, experiencing a renaissance as a gallery, a workshop, a home or an artist studio. Some, alas, are torn down.

But as with any home, the former church building does not hold the memories. Rather, the community that worshipped there keeps those memories close; the individuals who received sacraments there treasure their recollections of their experiences of grace there.

Among the uses for former churches in the Diocese of Burlington are:

St. Benedict Church, North Hero
The GreenTARA Gallery is located in the former St. Benedict Church in the center of North Hero. Diane Gayer bought the former church last year and renovated much of it over six months. It is now an art gallery with coffee/tea bar and artist studios plus workshop space. The former church was built as a general store in 1823 and situated on the waterfront in the village of North Hero. It was converted to a Catholic church in 1888-89 and moved to its current location in 1947. It closed as a church in 2008. “Because of the 24-foot-by-50-foot spatial dimensions, the building exhibits the qualities of the Golden Ratio,” Gayer said. “The high vaulted ceiling brings in a lot of soft daylight, which we are careful to use as direct sunlight on art can be destructive.” Both the wood dais (where the sanctuary had been in the church) and the choir loft offer areas for larger art or activities or to create a quieter space under the overhang of the loft. “Additionally the church was quite simple in its details due to the time it was built and converted; this in turn allows it to make a very attractive art gallery,” Gayer said. The location provides lovely views of Lake Champlain to the east, and west to expansive fields of corn and open sky. The name GreenTARA keeps a spiritual nature to the business and is in keeping with the much needed healing in the world, Gayer said. Green Tara is the Tibetan goddess of compassion and enlightened activity. Additionally the activities, from the mix of exhibits and guest talks to workshops on green roofs and emphasis on local food, all have art and environment at their core.

Our Lady of Lourdes Church, North Pownal
James Gardiner has transformed the former Our Lady of Lourdes Church in North Pownal into his home and workshop for his business, Atmosphyre – a bathroom vanity and sink manufacturer. The designer said the space fits his needs perfectly “because when you are making stuff from nothing you want to be inspired.” He does plan to replace some of the colored windows with clear glass because he is “starving for natural light.” He has replaced the pews with a variety of tools, but the space still has the feel of a church. “The building was completely designed and built … to make a connection between man and God,” he said. “People are still mindful of God when they enter the building.”

St. Columban Church, Arlington
The cornerstone of the former St. Columban Church in Arlington was brought from Mucross Abbey in Ireland; the church was named after the 7th-century Irish missionary abbot who founded monastic centers in France, Switzerland and Italy that became centers of evangelization and learning. When the church closed in the 1960s, the congregation moved to its new St. Margaret Mary Church. The former St. Columban’s was once home to a Norman Rockwell museum (the Saturday Evening Post artist lived in Arlington for 14 years) and most recently an artist’s studio and gallery.

Originally published in the Fall 2017 issue of Vermont Catholic magazine.