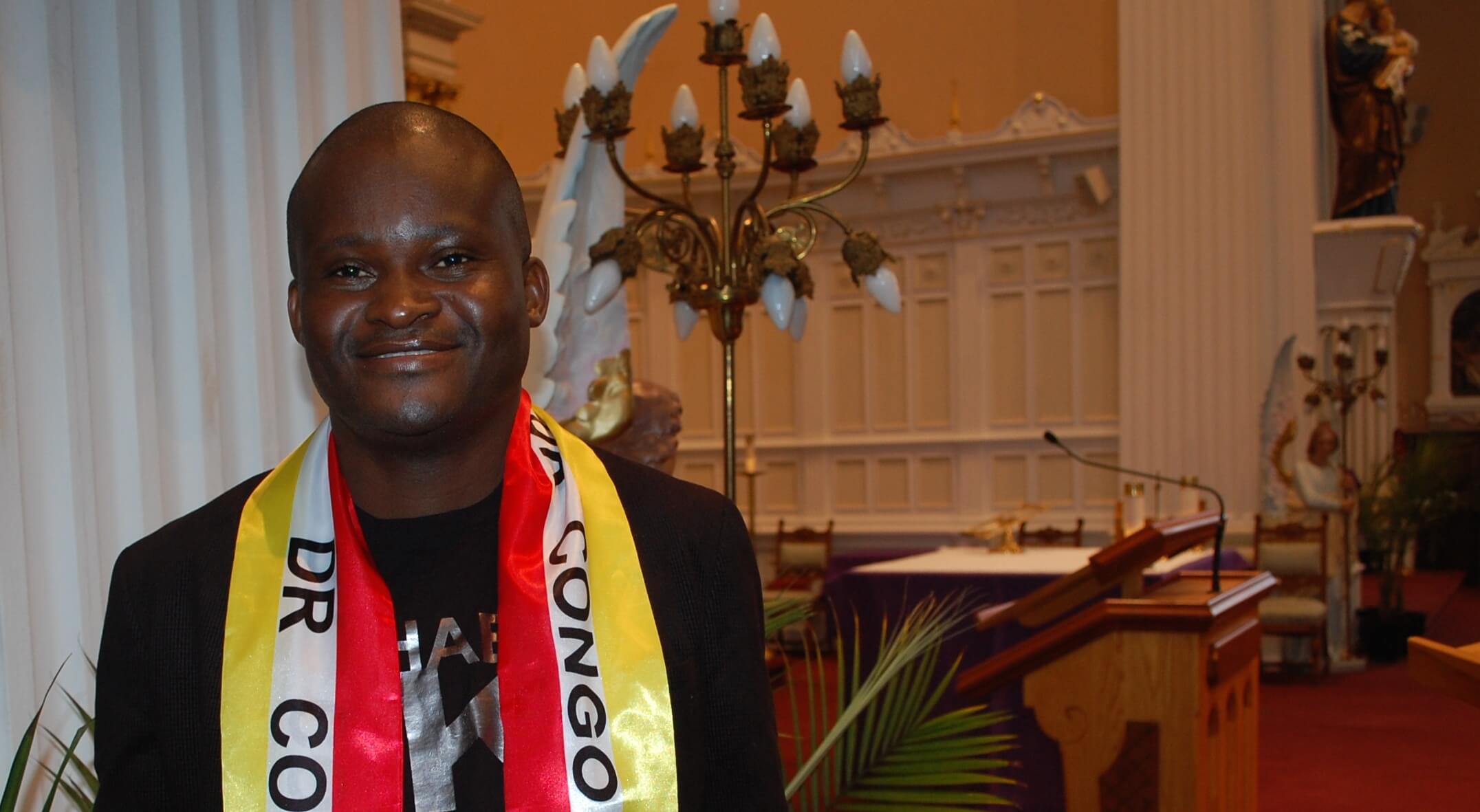 Photo Credit: Vermont Catholic/Cori Fugere Urban - Jules Wetchi, an ophthalmologist who arrived in Vermont in 2013 from the Democratic Republic of the Congo, is founder of a ministry that helps some 150 members of New American communities integrate more fully into parish and diocesan life, to share the Gospel and maintain their culture in a new place.

Pope Francis has expressed his desire that the Church may be “the place of God’s mercy and love, where everyone can feel themselves welcomed, loved, forgiven and encouraged to live according to the good life of the Gospel.”

The Cathedral of St. Joseph in Burlington, founded in 1850 as the first French national parish in New England, has been this place of welcome for French-speaking New Americans from Africa and the Congolese Catholic community, said Jules Wetchi, an ophthalmologist who arrived in Vermont in 2013 from the Democratic Republic of the Congo.

Wetchi is founder of a ministry which helps some 150 members of these communities integrate more fully into parish and diocesan life, to share the Gospel and maintain their culture in a new place.

As a leader of the youth commission in the Archdiocese of Kinshasa who worked with Cardinal Laurent Monsengrwo Pasinya of Kinshasa and advisor to Pope Francis, Wetchi was concerned when he discovered many African new Americans, once very active in the Catholic Church of their homelands, were being lost to the Church upon their arrival in Vermont, often connecting with other denominations where the language was familiar.

By forming the French-speaking Catholic communities in 2015, Wetchi began the work of helping members establish important relationships, maintain their culture

and nurture their Catholic faith, while facing the significant challenge of a language barrier.

Father Lance Harlow, cathedral rector, recalls, “I became involved with the African community when I arrived at St. Joseph in 2015. They had been in place here before my arrival. Part of the challenge has been the language and cultural differences and sorting out different nationalities.

They are not all from the same country, and while we may think that they are unified as ‘Africans’ they are very much unified by their nation of origin, not their continent.”

The communities were delighted when, in 2016, Father Harlow began celebrating Mass in French in the chapel, Wetchi said. Today, Father Harlow celebrates a

French Mass once a month in the cathedral.

Every other weekend, the communities meet in the chapel for prayers, sharing the Gospel and practicing songs, added Wetchi, who is also a student in the last year of lay formation.

Wetchi, who is completing a master’s degree in public health at the University of Vermont, also assists members in understanding the U.S. healthcare system and laws and helps them apply for jobs.

“I do my best to help members of the African community maintain our culture, which is better for maintaining the life in the family, like the holy family of

Mary, Jesus and Joseph,” said Wetchi, who is a husband and father and member of the diocesan committee for the Year of the Family.

Father Harlow added, “I am greatly humbled by the strength of their Catholic faith and the practice thereof, especially considering that many of the older generation that comes to Mass doesn’t understand English. They have survived many horrors in their own countries and have made great sacrifices to move to Vermont — including loss of careers, murder of family members and that disorientation that comes from leaving one’s own culture and surroundings to be immersed in a culture and climate very different from their own. They seem to adapt with extraordinary vigor.”