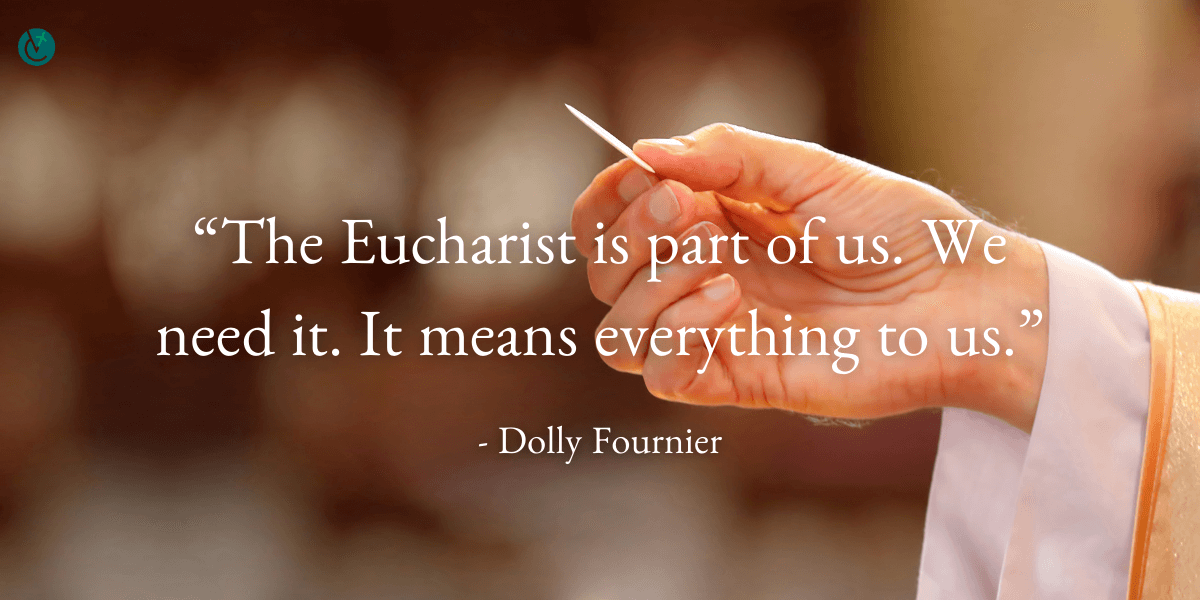 Francois (Frank) Daigneault didn’t even have to knock on the door when he arrived at Dolly and Andy Fournier’s home in Glover. Andy was there to open the door as soon as the visitor stepped onto the porch, carrying something precious: the Eucharist.

Dolly is a quadriplegic and only gets to Mass when Daigneault can borrow a special van to take her; he brings communion to her and her husband at other times.

“We wouldn’t get communion if it wasn’t for Frank,” she said of her friend. “The Eucharist is part of us. We need it. It means everything to us.”

The Fourniers, like Daigneault, are parishioners of Most Holy Trinity Parish’s St. Paul Church in Barton. They are two of the people he serves; he brings communion to about a dozen homes on the first Sunday of each month.

A native of Orleans and a retired Air Force master sergeant, Daigneault has been an extraordinary minister of holy communion for decades, beginning when he was in the service. “When I was moved to a new base, the chapel was the first place I went,” he recalled.

He and his wife, Debbie — also involved in various parish and community charitable works — have two children and six grandchildren. He is a retired elementary school physical education teacher and now drives a school bus and delivers senior meals.

He volunteered to be an extraordinary minister of holy communion while stationed in Indiana. “I thought it was an honor to share the Body of Christ with our parishioners,” he said. He still enjoys the ministry, “meeting people at their homes and bringing Jesus to them and bringing some joy into their lives.”

He enjoys talking and laughing and has become a friend to many.

“When we bring the Eucharist to another human being, we are showing them compassion and meeting them where they are at,” he said. “It’s a service that they deserve.”

He said those to whom he brings communion are always appreciative. “It makes my heart glow when I meet these people.”