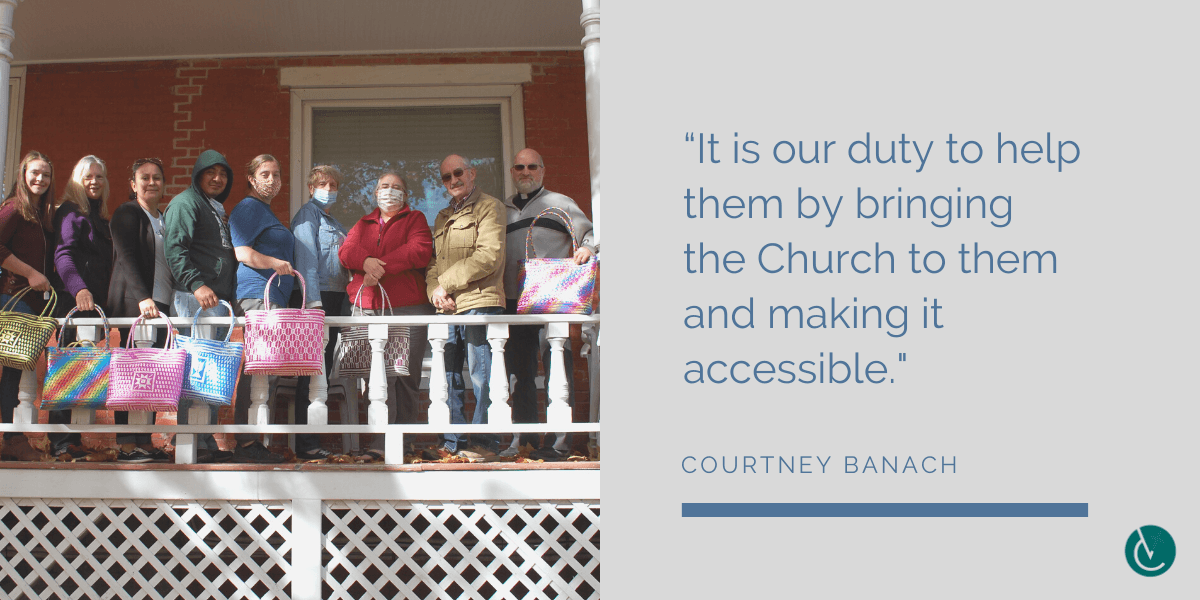 Eleuterio “Teyo” Hernandez-Ortiz worked for four years on an Addison County dairy farm to help support his wife and four daughters in his hometown of San Jose Monteverde in southern Mexico. It’s tiring, hard and dangerous work, and for a long time he was not able to find refreshment in the practice of his faith.

He had no way to get to church, and even if he did, he could not understand the English spoken at Mass. There was no priest to hear his confessions in Spanish.

But last year, following the Burlington Diocesan Synod, members of St. Peter Church in Vergennes and St. Ambrose Church in Bristol — both served by Father Yvon Royer, pastor — decided to make the synod’s call for parishes to be more involved in evangelization concrete through service to the migrant workers in Addison County.

A handful of them were sometimes able to attend a Sunday Mass, but fewer came after the Covid-19 pandemic hit.

Courtney Banach of St. Peter’s, who works on a farm with some migrant workers, knew how much their faith meant to them, evidenced by cross necklaces they wore or the images of Our Lady of Guadalupe — patron saint of Mexico — they had on their phones. “It’s what holds them together,” she said.

Parishioners formed the Migrant Outreach Team to meet with the workers and determine their needs and how parishioners could help.

One of the first things Father Royer did was learn the prayer of absolution in Spanish so he could give absolution after hearing the workers’ confessions with the help of Google Translate.

The first event was a Mass in Spanish last year for the Feast of Our Lady of Guadalupe at St. Peter’s. “It was a huge success,” Banach said, noting that team members hoped a dozen people would attend, but 120 came, including the workers, parishioners and local Job Corps students.

“We realized we had a lot of people interested in the ministry,” Father Royer said.

Twenty-seven parishioners took Spanish classes in the St. Peter Church hall before they had to be curtailed because of the pandemic, which also canceled a Good Friday Spanish service. When public Masses resumed, some parishioners began driving workers to daily Mass. They provided the local workers with boots, jackets, clothing and even air conditioning.

Parishioners are now selling colorful handbags made by women in San Jose Monteverde who because of the pandemic are not able to sell their wares there so have no income. Two dollars from the $13 profit of each bag goes to the church in their town. Eleven dollars of the profit goes to the crafters, who usually make about 50 cents a day. Many of them are widows with no other source of income besides their crafts.

Hernandez-Ortiz appreciated all the Vermont parishioners — including some from Our Lady of Good Help in Brandon — were giving the migrant workers, but his vision was that the ministry would expand to assist the workers’ families back in Mexico, most in his hometown of 1,500, 70 percent of which is Catholic, but served by a priest only once a year.

The parishioners embraced his idea and “adopted” the town, initially raising funds through rummage sales and donations to send $2,000 to build a needed reconciliation room at the church. They shipped food and more than 100 pounds of clothing and are now working with Rotary International to fund a $30,000 project for a second cistern for clean water because the one there is insufficient and in need of repair.

“I am very happy and feel proud to be able to support my community with the help of these people,” Hernandez-Ortiz said through a translator. He is moved by their desire not only to help the migrant workers get to Mass but to help “with what is so important as supporting and changing lives in my community.”

And the members of the Migrant Outreach Team realize the importance of the migrant workers’ work on the farms of Addison County. “They leave home and come to work here on our farms so we can have good food on our tables,” said Donna Fox of St. Ambrose Church. “We are so grateful, and this [ministry] is a way to give back.”

Alicia Rodriguez of Our Lady of Good Help Church and her husband work on a local dairy farm; she is from Mexico. She was pleased to hear about the work of the Migrant Outreach Team and wanted to help. “They are my people,” she said of the Mexican workers.

“They are our brothers and sisters in Christ,” Banach said. “It is our duty to help them by bringing the Church to them and making it accessible and not letting them fall away while they are here. They support our agrarian economy.”

St. Ambrose parishioner Gerry Tetrault said it is a “Gospel imperative” to be kind to strangers and welcome immigrants. And he credited Father Royer for his commitment, time and energy for the ministry.

For Father Royer, the work the parishioners are doing to support the migrant workers and their families is “another reminder of [parishioners’] good hearts, very caring hearts.”

Current plans call for a Spanish Mass for the Feast of Our Lady of Guadalupe in December and one for the Feast of St. Joseph in March — with time to socialize after if pandemic protocols allow.