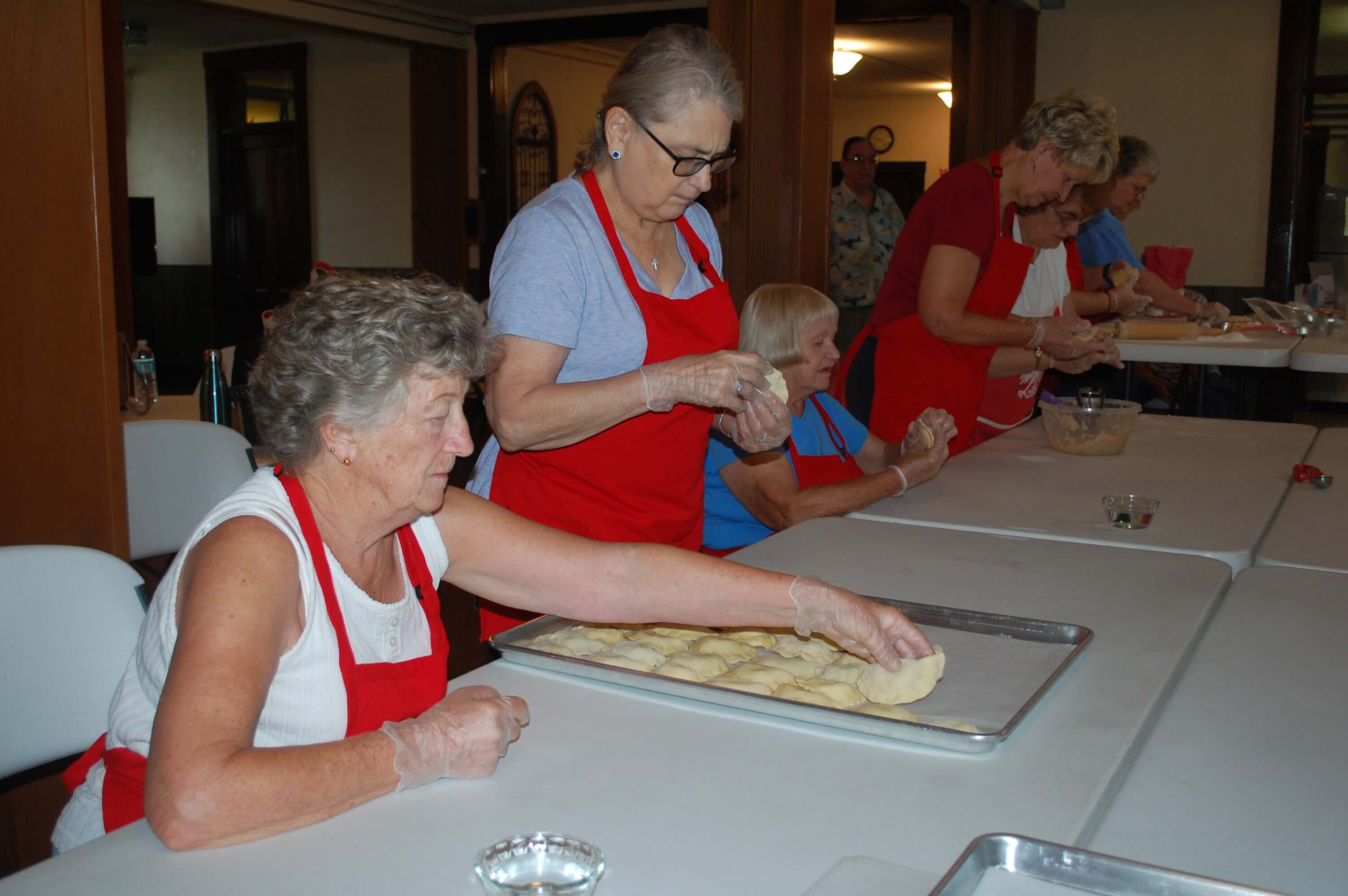 Eight-year-old Madylin Hayward drew what seemed like a collective gasp from the pierogi makers at St. Stanislaus Kostka Church hall when she said she had never eaten one of the Polish dumplings.

“Today’s the day!” Joan Burgess exclaimed, eliciting laughter and words of encouragement from the women and bringing a smile to the child’s face.

Madylin and her grandmother, Marianne Hayward, sat at one of the white tables that formed a large rectangle for the pierogi operation Aug. 17. Unlike her granddaughter, Hayward had eaten pierogis before and “loved them,” but making them here was a first for the pair. “I do [make] all the other Polish food,” Hayward said. “I came for her because she wanted to come.”

Madylin was the only child who attended the second day of pierogi making at the church hall along with more than a dozen women and one man.

They made 470 sauerkraut pierogis; the week before volunteers had made 400 of cheese and potato.

Asked how they like to eat the pierogis, Barbara Trepanier said there is “only one way: with butter and onions.” Some like the pierogis pan-fried crispy, while others like them softer.

The smooth dough — made of eggs, flour and cream cheese — was prepared at the home of one of the volunteers early in the morning then brought to the church hall in zipper bags. Ceil Scott said it’s easier to make the dough with a food processor than it used to be by hand.

At the church hall, the dough was rolled, cut, filled (with about an ounce of filling), pinched, boiled, packed and frozen — all “with love” said Leona Razanouski: love “for the parish, everybody that buys the pierogis and for everybody.”

Parishioners will sell the pierogis at the town block party at the West Rutland town hall on Sept. 15 from 5 to 9 p.m.: $5 for a half dozen, $10 for a dozen. They also will be featured at the parish’s Polish meal on Sept. 30 at 4 p.m. at the St. Stanislaus Kostka parish hall. All funds raised go to the parish.

The pierogi makers have fun during the four-hour pierogi party, making the hundreds of dumplings, talking, laughing telling stories, speaking in Polish and even singing some songs in Polish; “Happy Louie” songs are among the favorites. (Happy Louie, leader of the Happy Louie and Julcia’s Polka Band, received a Grammy nomination for Best Polka Album in 1995.)

Judy Bender was one of the pinchers, pressing the edges of each pierogi tightly to seal them so when boiled, the filling did not escape its doughy cocoon. “The rollers are the real technicians,” she said. “They have to make sure the dough is not too thin and not too thick. You’ve got to have it rolled just right.”

“We are building community by being together and doing God’s work for the church,” said Mary Nemeth, as she rolled dough. “It’s about being together.”