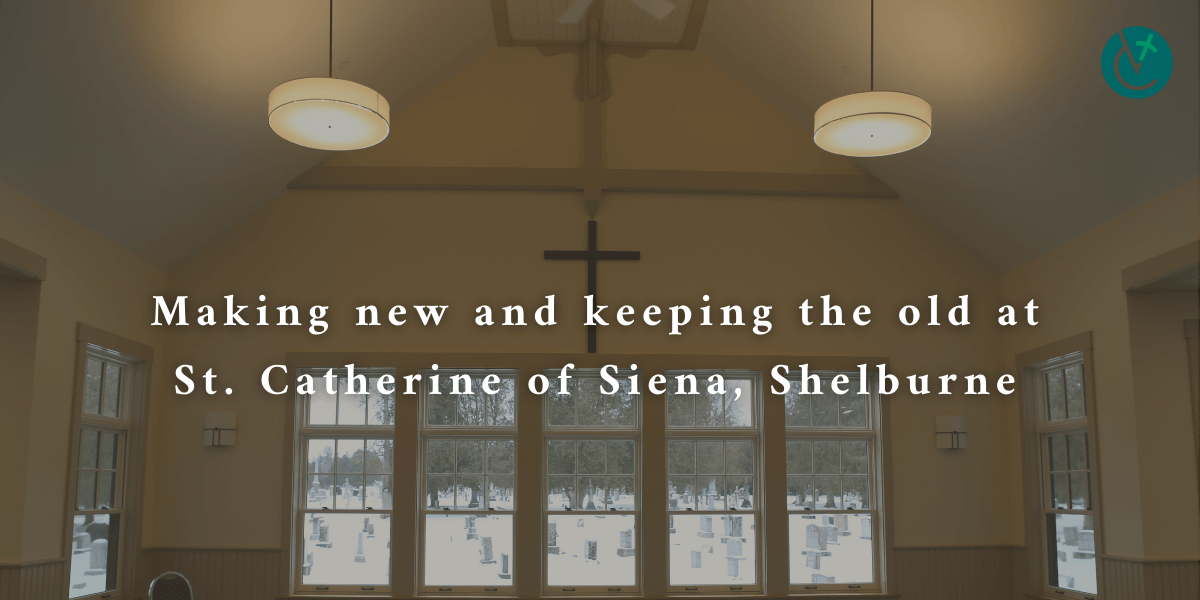 Making new and keeping the old at St. Catherine of Siena Parish

The scope of a recent building project at St. Catherine of Siena Parish in Shelburne was to build a new parish hall adjoining the church, renovate the church and build an addition for a new sacristy. The parish engaged SAS Architects in Burlington for architectural plans, and the construction took place in stages to ensure that the parish always had an appropriate space available for Mass. The hall was completed in July 2020; Masses were celebrated in the hall from July through November while the church was being renovated.

The new parish hall is connected to the back of the church and is of an architectural style that acknowledges the heritage if the 125-year-old church. As you enter the hall from either the street side or the parking lot side you find yourself in an open gathering space with the church on one side and the hall on the other. This gathering space was designed intentionally as an area for people to socialize after Mass. It also features bathrooms and interior ramp access to the church, neither of which were available previously.

The main area of the hall is a comfortable, attractive space with a large, yet cozy gas fireplace and a wall of windows that overlooks the parish cemetery. The hall includes a large, open kitchen area perfect for parish functions and social outreach projects. Due to Covid-19, the parish has had limited opportunities to use the kitchen and the hall.

Many salvaged materials were used in the construction of the parish hall. The exposed trusses came from the old parish hall — which had originally been the chapel at Shelburne Farms. The transom windows in the kitchen area came from the old hall. Many motifs used in the new hall were inspired by the old hall and the Shelburne Farms connection, such as bead-board paneling and “cross and bible” style doors. The distinctive green slate used for the fireplaces came from the former Cathedral of the Immaculate Conception in Burlington.

St. Catherine Church was built in 1895 but underwent a renovation in 1937. This project focused on restoring and expanding upon many of the elements from that 1937 renovation. The church already featured a large wall mural on the back wall of the sanctuary which was done as part of the 1937 renovation by the same artist who painted the murals in Holy Family Church in Essex Junction. As part of this renovation, mural artist Heather Bruno-Sears picked up on the palette and motif from the original mural and painted the cornice detail which now wraps the interior of the church. Als,o the tabernacle was moved from a small side chapel area to the center behind the altar. The parish plans to add a statue of the Holy Family to that small chapel area with the intention of creating a prayer space that would appeal to families with young children.

Anyone who had ever seen the sacristy at St. Catherine of Siena prior to this project knows that it was a very small space. A feature of this project is the newly built sacristy which is an addition on the south side of the church. The new sacristy is well appointed with storage and is separated from the church by a hallway, which provides a buffer zone between the quiet area of the church and the activity that can occur in the sacristy before and after Mass.

The addition of the sacristy on the south and the interior ramp walkway on the north side created exterior wall space that allowed for adding four new stained-glass windows. Three of the windows have been installed, with the fourth still in production in January. These four windows were designed and created by Vermont-based artist Lawrence Ribbecke.

The parish was deliberate in choosing which saints and scenes to depict in the new windows. The window in the hallway leading to the sacristy depicts The Visitation and was selected thinking about Extraordinary Ministers of Holy Communion who take the Blessed Sacrament to homebound parishioners. Inside the sacristy one window depicts Blessed Pier Georgio Frassati and the other will depict St. Joan of Arc. These youthful saints were chosen to provide inspiration to altar servers. The interior ramp on the north side features a window of the church’s patron, St. Catherine of Siena.

The new parish hall and the renovations and additions to the church have created comfortable, aesthetically pleasing interior spaces — improvements for both the worship and hospitality experiences for this parish.