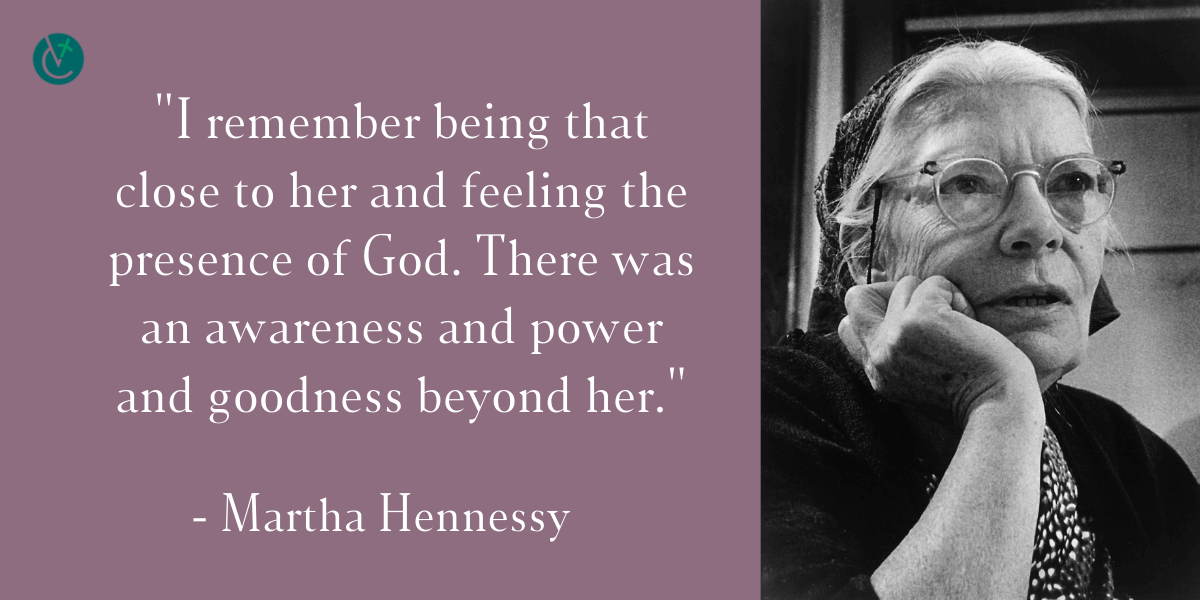 Martha Hennessy’s first memory of her grandmother was sitting on her lap as a toddler. She sat close with her ear to her grandmother’s chest. “That was my first awareness of God,” she said. “I remember being that close to her and feeling the presence of God. There was an awareness and power and goodness beyond her. It was coming through her.”

That is the first of many memories Hennessy, of Weathersfield, cherishes about her “Granny,” Servant of God Dorothy Day.

A convert to Catholicism and a founder of the Catholic Worker newspaper that sparked the Catholic Worker movement of Catholic social teaching, Day died at Maryhouse in New York City among the poor in 1980. Pope John Paul II gave the Archdiocese of New York permission in 2000 to open her cause for sainthood, thus she has the title of “servant of God.”

Hennessy, born in 1955 in Staten Island, New York, moved with her family to Vermont when she was two. Day visited her only child, Tamar, and her family, once staying for four months to take care of her grandchildren while their mother, a single mother, was in nurses’ training in Brattleboro.

The nine grandchildren visited Day at Tivoli Farm on the Hudson River in New York, and Hennessy remembers helping with farm chores and cooking for the 50 people that lived there. When she was 14, her brother was sent to Vietnam, and she joined her grandmother in protests of the Vietnam War.

Day died when Hennessy was 25, so she was a “big part” of Hennessy’s life.

Though she was raised Catholic, Hennessy — a grandmother herself who has two children and one stepdaughter — drifted away from the Church and trained to be an occupational therapist. “Loving kindness” was a phrase her grandmother and mother used often, and she saw her career path as a way to help people.

In 2002 Hennessy accepted an award in Dorothy Day’s name from the national Women’s Hall of Fame, giving a brief speech. “That was the beginning of my understanding of the legacy of faith-based pacificism,” she said. “In that moment, I recognized there is such an important role for me to get involved in the story of who my grandmother was.”

Away from the Church from the time she was a teen until she was 50, Hennessy — now a parishioner of Maternity of the Blessed Virgin Mary Church in Springfield — began attending Mass with her landlady while on a 9-month assignment in Hawaii as an occupational therapist. In Hawaii, she felt she had the room to explore her baptism.

She returned to the Catholic Church in 2005 and then to her volunteer work with the Catholic Worker in New York.

She said her grandmother’s practice of the works of mercy helped bring Hennessy back to the Church, and her own involvement with the Catholic Worker helped her “keep her feet in.”

Hennessy’s return to the Church was “cautious but very profound,” she said.

Dorothy Day’s love, faith and “intense American inheritance” with a lineage that goes back to the Mayflower have been profoundly influential in Hennessy’s life. “She was a product of the dream of democracy and … freedom and the dignity of work, she said. “She saw violence, neglect and lack of Christian goodwill” and was willing to work toward something better.

Share This Post
Saints, Evangelization and Catechesis, Dorothy Day, Martha Hennessey
See More
Last Article
‘God is with us’
Next Article
Year with the Saints: Holy Family
Back to Vermont Catholic Magazine