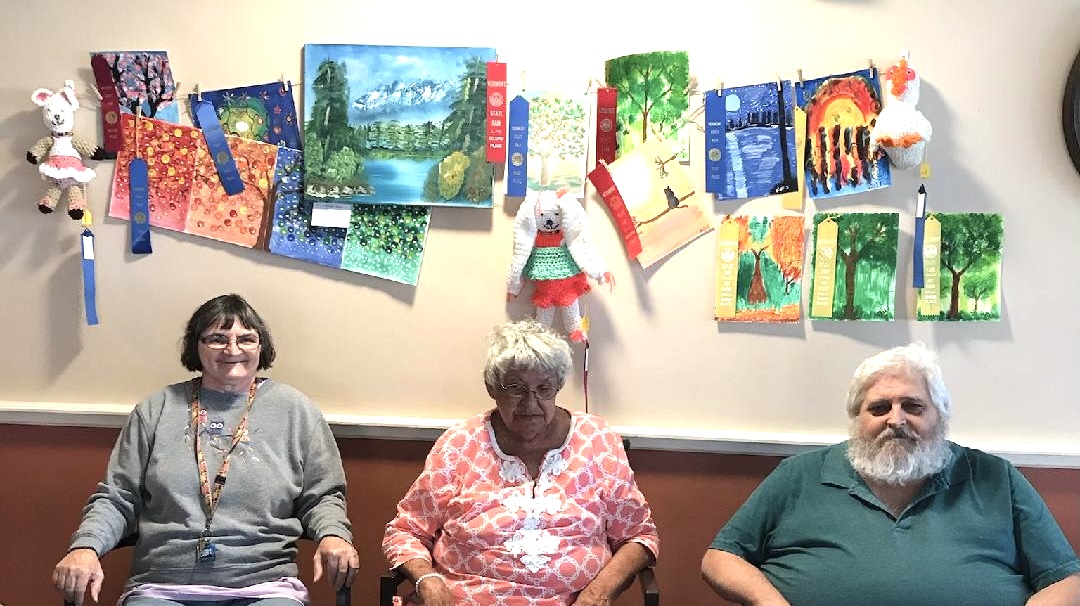 “Art and crafts stimulate their mind and give them a lot of satisfaction especially after they win a ribbon,” said Rosie Poczobut, Loretto Home activities director. “It makes them feel good, like they accomplished something.”

Resident Bill Jackson entered 11 paintings; they earned him four first-place ribbons, three for second place and four for third. “I was surprised,” he said. “My family was surprised. They didn’t know I painted or even drew pictures.”

Carol Burney entered three crocheted animals and garnered first place for a teddy bear, first for a chicken and second for a rabbit.

Pitts had hoped to win a ribbon last year at the state fair in Rutland but was disappointed. So when she saw her ribbon this year, she said she was shocked; she had wanted a ribbon so badly she cried happy tears.

Jackson received one second-place fair ribbon for an oil painting a half dozen years ago.

“I have some good talent here,” Poczobut said.

The Covid-19 pandemic curtailed some of the group art activities at Loretto Home, but some are expected to resume soon with a new volunteer who will lead arts and crafts once a month.

Jackson is looking forward to working with the volunteer. “I’ve got ideas in my head, but I need somebody to help me motivate myself,” he said.

Painting is a hobby for Jackson, who never took formal painting outside of school in Orwell and Fairhaven. He sometimes paints with a prompt, but mostly works out of his imagination. “I’ve always been interested in art,” he said; in school it was his best class.

Burney has been crocheting since she was 11 when her aunt taught her, and she often crocheted with her mother and sisters. “God always gives each person a special ability,” she said, noting hers is crocheting.

She once crocheted a box full of different animals and donated them to a nursing home to use for bingo prizes, and she has made some to sell.