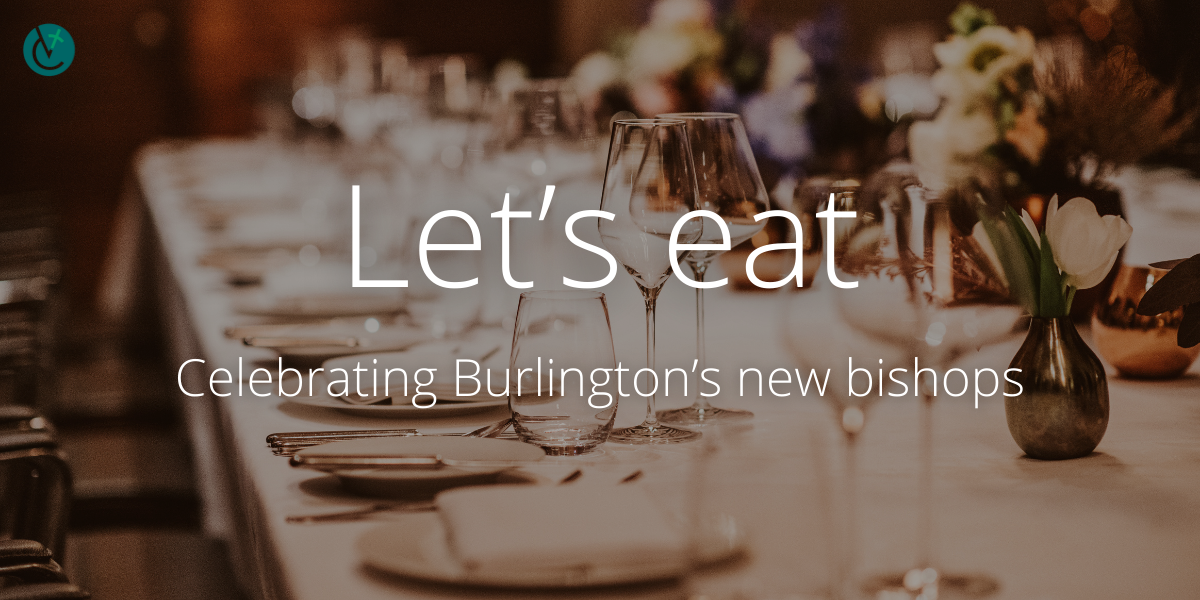 What is the purpose of a banquet or huge celebratory feast? According to Merriam-Webster Dictionary, a banquet is an elaborate and often ceremonious meal for numerous people, often in honor a person or in recognition of some occasion or achievement. Banquets may be held to honor dignitaries, award recipients or graduating high school seniors.

I recently saw a picture of a menu shared on Instagram by the Archives of the Archdiocese of Cincinnati. This post inspired me to search our collections because I was instantly curious.

What sort of events warranted the extensive planning associated with ceremonies, an honoree, a large group of prominent attendees and fancy dinners?

I found my answer in the collections of each of the bishops of Burlington. Some were consecrated here prior to their installations, and some were installed here in Burlington after serving as bishop elsewhere.

During this Year of Communion: Unity in Creed, Worship and Life, let’s look at how some of these events brought communities together for a special life celebration.

Bishop Louis deGoësbriand, first bishop of Burlington, was consecrated to the episcopacy Oct. 30, 1853, at Old St. Patrick’s Cathedral in New York City. In attendance were Bishop Fitzpatrick of Boston and Fathers O’Callaghan and Mignault, missionary priests from Vermont.

They boarded a train for Vermont following the ceremony and arrived in Rutland in the early evening of Nov. 3, where they were met by a large, cheering crowd and a brass band. Bishop de Goësbriand and his travel companions met three other priests; they boarded carriages and made their way to Burlington.

He was installed as Burlington’s first bishop the very next day in an elaborate Pontifical Mass. A detailed account of this event was reported in the local printed news but absent here was reporting of a celebratory fanfare that would follow in the form of a banquet. Instead, he began his ministry immediately by hearing confessions and administering the sacraments. There was no mention of food or parties.

Bishop John Michaud, Burlington’s second bishop and first native Vermonter to serve in that role, was consecrated on June 29, 1892, and served as co-adjutor of this Diocese until the death of Bishop deGoësbriand in 1899. He was installed as bishop of Burlington in December 1899.  We discovered information detailing the formalities of each of the Pontifical Masses, including the list of notables present, but only a brief mention of “a public reception at the bishop’s residence,” where all were invited to “meet the distinguished clergyman who has lately had bishopric honors thrust upon him.”  Surely, there must have been a fancy meal to honor the new bishop?

Following all the sacred observances and pageantry involved with consecration and installation ceremonies of Burlington’s next four bishops, I discovered there were banquets after all!  Bishop Joseph Rice’s consecration banquet menu included “blue points” (oysters), “baked fillet of shad,” “milk-fed broilers” and a salad named for him, “salad à la Bishop Rice.”

While some interesting menu items such as “consommé Madrilene” and salad with “southern dressing” at Bishop Matthew Brady’s consecration celebration, more recognizable offerings were found on the banquets for Bishops Edward Ryan and Robert Joyce – foods considered more in line with “meat and potatoes.” Each of the programs printed for the occasions honoring Bishops Rice, Brady, Ryan, and Joyce included the names of brother priests who would offer accolades and toasts for the new bishops.

Solemn ceremonies have changed quite a bit after Vatican II.  The large, elaborate banquets have also changed for reasons only known to those tasked with the planning, but there has still been the opportunity to recognize the significance of events and honor in our Diocese, as we note with the consecration and/or installation ceremonies of Burlington’s bishops since 1971 – Bishops John Marshall, Kenneth Angell, Salvatore Matano and Christopher Coyne.

—Kathleen Messier is the assistant archivist for the Diocese of Burlington. For more information, email Archives@vermontcatholic.org.