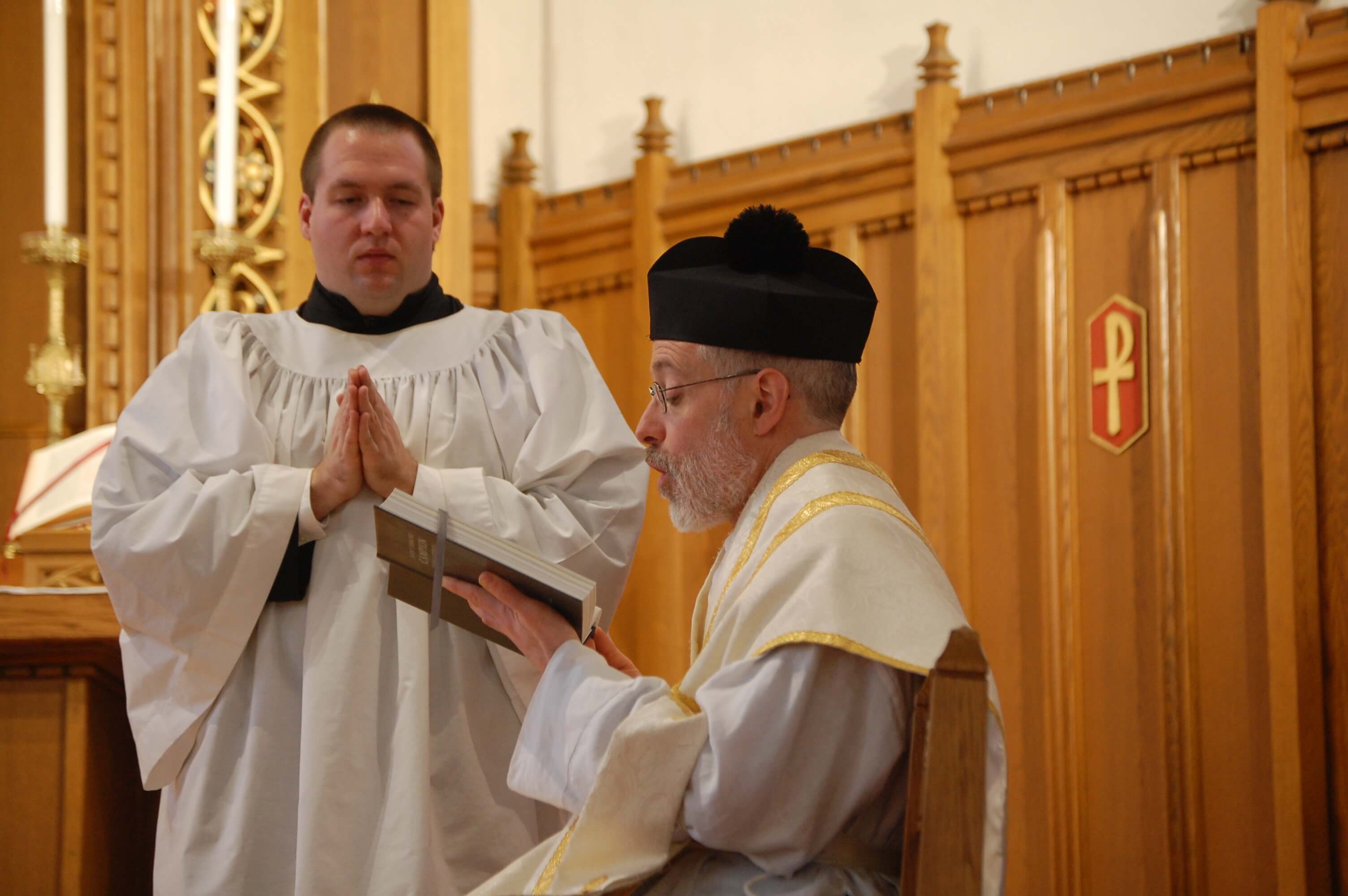 When the extraordinary form of the Mass is celebrated in Latin on Sunday mornings at St. Anthony Church in Burlington, it’s not just those who long for the Mass of their youth who attend.

Certainly there are people in the congregation who remember the “Latin Mass” celebrated before the liturgical reforms of the Second Vatican Council of the 1960’s. But there also are young adults and young families.

He serves at Mass when he is home from his seminary studies and said the extraordinary form of the Mass “focuses more on the divine than on the human.”

His father, Brad Carlson, said the extraordinary form of the Mass “seems more reverent” than the ordinary form, celebrated in the vernacular.

Burlington Bishop Christopher Coyne erected the Latin Mass community as a chaplaincy in 2017 and appointed Father Brian O’Donnell as chaplain. “I like the connection with our Catholic history — most of the rite is well over 1,000 years old, so this was the Mass offered or attended by countless saints,” he said.

He also likes the focus on God: “It is clear that the purpose is to worship the Almighty, not for the community to celebrate itself,” he said.

He also likes the silence — which is predominant in the peace of a low Mass, but also present in the glory of a high Mass — and he likes the beauty of the entire rite, “in which beautiful prayers, music, vestments, vessels, architecture, etc. all come together in a worthy offering to God of the best we can give.”

The extraordinary form of the Mass is always celebrated in Latin with the priest and people facing the same direction, and Holy Communion is received kneeling and on the tongue. “These are all options in the ordinary form but rarely found,” Father O’Donnell said. “Many other characteristics of the traditional Latin Mass were changed, sometimes dramatically, after Vatican II.”

There is more silence in the traditional Latin Mass; many of the priest’s prayers, including the Canon (mostly the same as Eucharistic Prayer I in the ordinary form), are said inaudibly. At a High Mass, almost everything audible is sung, though the homily is spoken in English.

“All of this combines to make the experience of the traditional Latin Mass quite different from an ordinary form Mass even when the latter is celebrated in a very ‘traditional style,’ and even more dramatically different than the average parish ordinary-form Mass,” he said.

“We love the tradition and the fact that (the extraordinary form of the Mass) is unchanging with the times,” said Kyle Walker of St. Thomas Church in Underhill Center after a recent Latin Mass at St. Anthony’s.

He acknowledge the use of Latin can be a challenge but said it is worth learning and is not a barrier to participation thanks to booklets the chaplaincy provides.

Father O’Donnell has celebrated the Latin Mass since 2011when he was administrator of Immaculate Conception Church in St. Albans and continued it at St. Joseph Cathedral after his transfer to Burlington.

St. Anthony’s is part of Christ the King St. Anthony Parish, and the traditional architecture of the church, which was renovated recently, is suitable for the traditional Mass. So “it made sense for the chaplaincy to move there once the renovation was completed” last year, Father O’Donnell said.

There are nearly 200 people who attend “somewhat regularly,” he said, with average Sunday attendance about 80.

Don Villemaire is part of the chaplaincy and said he had not been going to church for about 20 years because he felt angry about the changes after Vatican II and found himself “criticizing instead of praying.”

Then he learned of the Masses in the extraordinary form at St. Anthony’s. “I got the feeling [at Mass] that there is continuity with the Church of the apostles … not social engineering,” he said. “I feel uplifted, and my prayer life has increased tenfold.”

Joe Handy, 23, whose home parish is Immaculate Conception in St. Albans, has been to Latin Masses in three states and three countries. “At each one I have felt utterly comfortable, familiar and at-home knowing that the exact same rubrics, calendar and ancient Latin language are going to be used at each,” he said. “There is something very powerful in that kind of consistency that gets down into your roots and makes you feel truly at home in the Church, not just at any place around the world, but at any time in history as well.”

The majority of those who attend the daily and Sunday Latin Masses at St. Anthony’s are from the Burlington area, but people regularly drive from Franklin County, central Vermont and beyond to attend. He usually celebrates Latin Masses six days a week at St. Anthony’s: Low Mass during the week and High Mass on Sunday.

There is a monthly Sunday post-Mass potluck lunch in the parish hall that has helped build community.