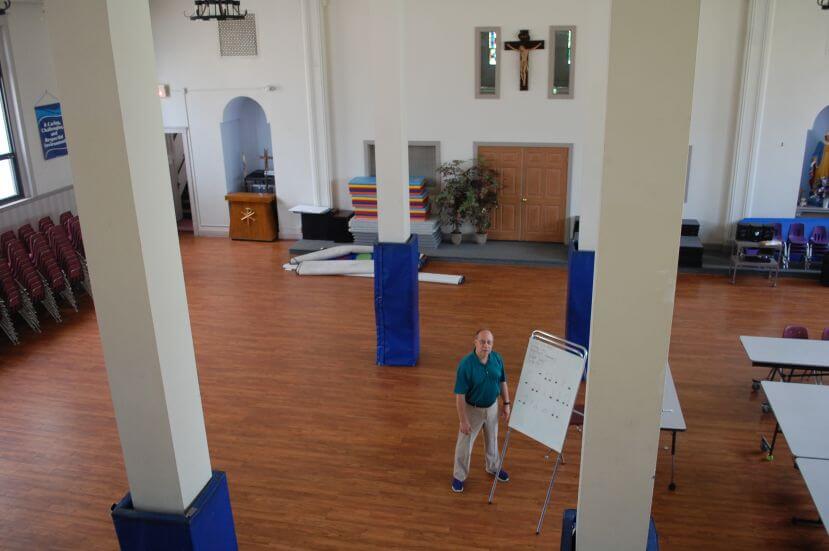 When David Estes, principal of The School of Sacred Heart St. Francis de Sales in Bennington, walked into his first meeting of Vermont Catholic school principals in 1987, he looked around the room and saw one religious brother; the rest of the principals were women religious.

Now he is no longer the minority; Vermont has no Catholic school principals who are members of religious orders.

And according to Lisa Lorenz, superintendent of Catholic schools for the Diocese of Burlington, this years marks the first year there are no religious sisters on staff of any of the 14 Catholic schools in Vermont, though pastors and other clergy are “wonderful” about visiting the schools.

Staffing is just one change Estes – a husband and father of two — has lived through in his nearly 40 years in Catholic education – all at the Bennington school where he used to teach third and fifth grades.

“I have a lot of history” here, he said as he sat in a school office that was once a choir loft overlooking what was Sacred Heart Church.

Other changes he has experienced during his tenure at the school are numerous: the reinstatement of grades seven and eight and the addition of a preschool; the expansion of the school into the church space for use as a multi-purpose room; an increase in interest in Catholic education among non-Catholics seeking quality education and a safe, disciplined environment; and the retirement of the last Sister of St. Joseph to teach in the school.

“All lay teachers today in Catholic education understand that by the words spoken and by their presence to children and young adults, they can bring faith and hope and joy,” she continued. “Our lay teachers, continue the legacy of religious [congregations] and continue to build on a strong foundation, for they teach us that it is not just the crucifix on the wall or the statue of Mary or Joseph in the school building that makes a school Catholic. It is not just the priests, religious sisters and brothers or lay teachers we have that make a school Catholic. It is this and far more. It is the living out of the charism of the religious orders who taught in the schools. It is the teaching of Gospel values and striving to model the message of Christ on a daily basis, not just in religion class but witnessed to throughout the school day; it is our conscious participation in the life and mission of the Church that makes us Catholic.”

When the last Sister of St. Joseph at Sacred Heart School retired, Estes said there was concern about maintaining the Catholicity of the school, but the lay teachers and staff members live, teach and pray in ways that make it clear this is a Catholic school. “There is a joy here surrounded by the Catholic faith,” Estes said.

School Masses and prayer are key, he added. “When you see the students singing the Lord’s Prayer, they’re not singing. They’re praying. They mean it. It’s the presence of God here among everyone.”

Last year six students were baptized, an example of the evangelization role played by the school, once filled with only Catholic children. “We are evangelizing all the time,” Estes said.

Other changes he has witnessed through the years include the addition of technology and technology education to keep up with the changing times; the addition of athletic teams that build school spirit; more single-parent families and safe environment training for teachers, staff and volunteers.

When Estes first came to the Catholic school, tuition was $50 a month; now it is $475. Though financial assistance is available, Estes said new ways of financing Catholic education need to be found.

As he looks to the future, Estes can’t help but look back on the changes he has experienced. “We’ve had a lot of change here at the school,” he said. “Change takes a lot of work, a lot of forethought and a willingness to change. …Change is a risk, but you have to go forward.”

–Originally published in the Fall 2017 issue of Vermont Catholic magazine.