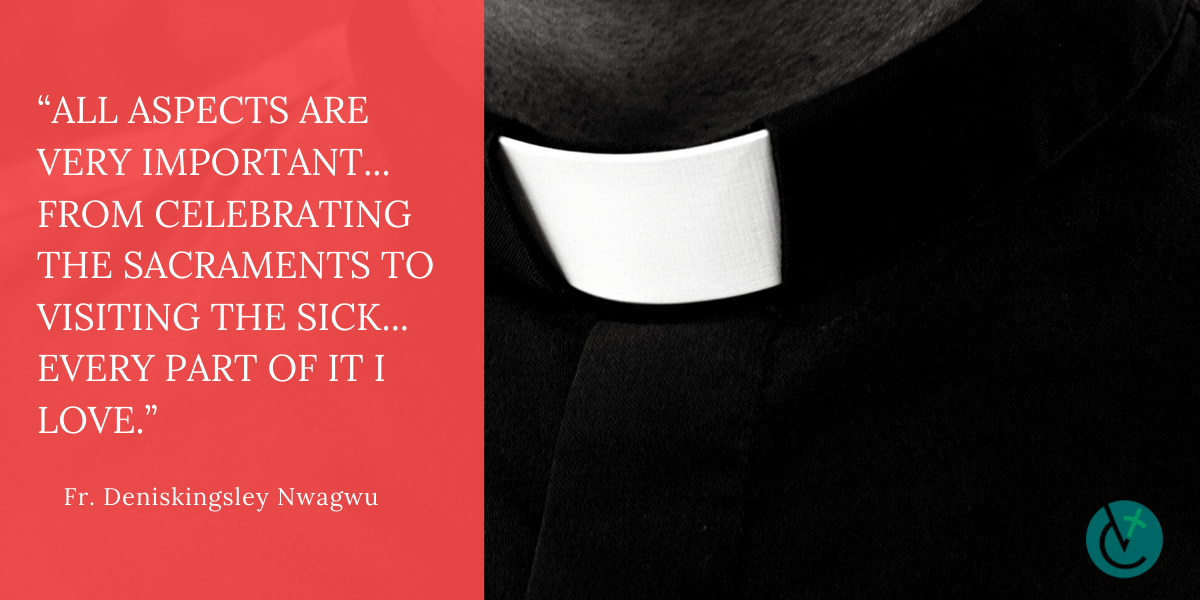 Holy Spirit at work in teacher’s call to priesthood

He was teaching high school English in his native Nigeria and thinking about going to medical school. But he had a friend who wanted to become a priest and was applying to Dioceses and religious congregations.

The friend asked him to accompany him to an interview with the Vocationists (formally called The Society of Divine Vocations) so he did. “My mind was not to become a priest,” he said.

After the friend’s interview, the priest he had met with walked him to the door and saw Nwagwu outside, waiting. “Why don’t you join us?” the priest said, inviting him to consider a priestly vocation. “I don’t want to,” the future priest replied.

The priest told him the congregation might not even accept him, but he gave him an application anyway.

That application form sat on Nwagwu’s table for six or eight months until his friend convinced him to apply. “To make him happy I filled out the form,” he said.

So what happened? Nwagwu was accepted and his friend was not. “It was the Holy Spirit at work,” he said.

Shortly after Father Nwagwu’s ordination in 2008 he performed the marriage of his friend and his wife.

“I love everything about the priesthood,” said the parochial vicar of Mater Dei Parish in Newport, Derby Line, Island Pond and West Charleston. “All aspects are very important” from celebrating the sacraments to visiting the sick. “Every part of it I love.”

One aspect of his ministry in the Northeast Kingdom is visiting inmates at the Northern State Correctional Facility; one of the priests from Mater Dei celebrates Mass there each Wednesday, visits with inmates and hears confessions.

“It’s a kind of ministry many people might not take to,” Father Nwagwu said, but it is an important ministry for him because he “brings Jesus” to the “forgotten of society.”

He reminds the inmates that God is loving, merciful and forgiving.

In the prison the priest “sees the vulnerability of life,” and he is reminded that “because we are out here [not in prison] doesn’t make us better than them,” he said.

He described a picture of the parable of the lost sheep, noting the shepherd went after the one lost sheep. “We need to help them [those who are incarcerated] become whole. That’s what God does.”

Father Nwagwu has been in Vermont for six years, first serving as parochial vicar of Our Lady of Seven Dolors Parish in Fair Haven. He likes the quiet of the rural state but does not like the cold winters.

He sees himself as a missionary priest. “If I weren’t I would not have left my house in Nigeria to come here,” he said with a grin. “The U.S. is a mission area. It’s something we’ve got to accept.”

The Diocese of Burlington is benefitting from the service of numerous “extern” priests who have come here from countries including Nigeria, India and the Philippines.

The Society of Divine Vocations was founded by Blessed Justin Maria Russolillo, SDV in Italy in 1920.

The Vocationist Fathers’ main charism is identifying and fostering vocations to the priesthood and religious life, especially among the less privileged.