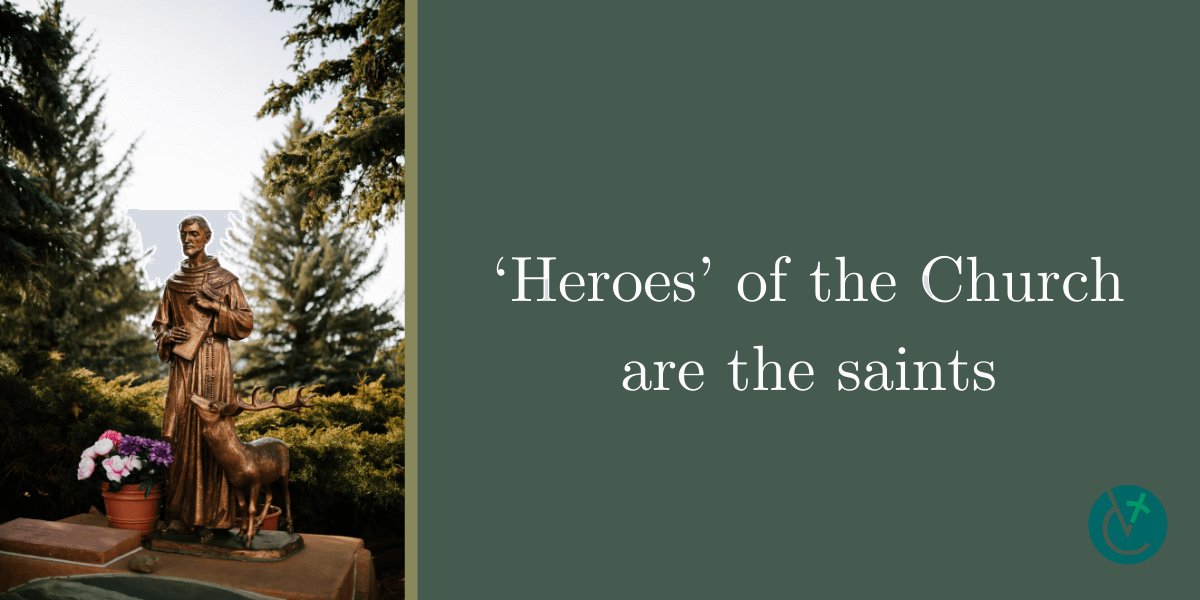 ‘Heroes’ of the Church are the saints

As a child I, like most young boys, was drawn to heroic fictional characters. My brother and I would watch countless cowboy movies where the Lone Ranger or someone like John Wayne or Clint Eastwood would come riding into town to save the day from the bad guys. I loved heroes from Star Wars, Super Hero movies, the Raiders of the Lost Ark series or any number of other films. More recently, the “Lord of the Ring” series holds up the character Frodo Baggins who saves fictional Middle Earth by destroying the One Ring of power.

By nature, we are all drawn to and attracted to heroes who save the day.

In our country’s recent history, we celebrated the real-life heroes of 911 and now the heroes of those on the front lines of the coronavirus pandemic. We know, deep in our souls, when pushed and when backs are against the wall, human beings have the capacity to do great things and literally give their lives so that others may live and find hope.

The “heroes” of the Church are, of course, the saints.  We are blessed now to have a number of North American saints who are heroes and role models for both young and old. Though there are always differences and unique qualities of every saint, there are some commonalities they all share. One of those is suffering and hardship.

All saints suffer and have to encounter head-on the various trials that come their way. Suffering leads to worry and fear and, for many, leads to a turning away from becoming the saint God has called us to be. In the words of Venerable Solanus Casey (from Wisconsin): “Worry is a weakness from which very few of us are entirely free. We must be on guard against this most insidious enemy of our peace of soul. Instead, let us foster confidence in God, and thank Him ahead of time for whatever He chooses to send us.”

Or, in the words of St. Katherine Drexel (from Pennsylvania), “The patient and humble endurance of the cross – whatever nature it may be – is the highest work we have to do.”

It has been said that human beings are homo viator – namely, man on a journey or on a quest. The saints remind us that life is not just a set of random events with no meaning or purpose. Though surrounded by suffering and sickness, the saints always chose to embrace and redeem this suffering through heroism and virtuous courage. What the saints show us is that this “work” of the Lord (c.f. Colossians 3:23), though difficult, is the greatest joy. St. John Neumann (from Pennsylvania) said: “As Christ has His work, we too have ours; as He rejoiced to do His work, we must also rejoice.”

To work and labor in the Lord’s vineyard, though difficult, should bring us great joy.

I want to end by addressing the young people of Vermont. Do not be afraid of working in the Lord’s vineyard and being His servant. Avoid the traps of this world that lead to the slavery of sin — addiction to drugs, alcohol, pornography and any number of other vices. Know that God has a big plan for your life. Learn from and lean on the saints for your understanding and strength.

One of the most interesting new individuals rising to the rank of sainthood in the Church is Venerable Augustus Tolton. He was a slave who eventually became a priest near Chicago. He was known for his kindness, love and piety toward all — even those who treated him harshly due to the color of his skin.  Upon his ordination to the priesthood he wrote:  “The  Catholic Church deplores double slavery — that of the mind and that of the body. She endeavors to free us of both. I was a poor slave boy, but the priests of the Church did not disdain me.”

St. Paul wrote on numerous occasions about the “slavery” that sin brings to us. May we all discover the freedom that the saints experienced and now teach us — freedom that came by obedience to the will of God and by following Christ to Calvary, embracing the suffering of the world to bring about the redemption of souls.

Kateri Tekakwitha, the Mohawk Indian who is now a saint of the Church, fell in love with the cross of Christ so much that everywhere she went she left simple wooden crosses throughout the woods she traveled in New York, Quebec and possibly even Vermont. At the end of her life she wrote: “I am not my own. I have given myself to Jesus and He must be my only love.”  May that be our prayer this day as we face the challenges, sufferings and hardships of this world.