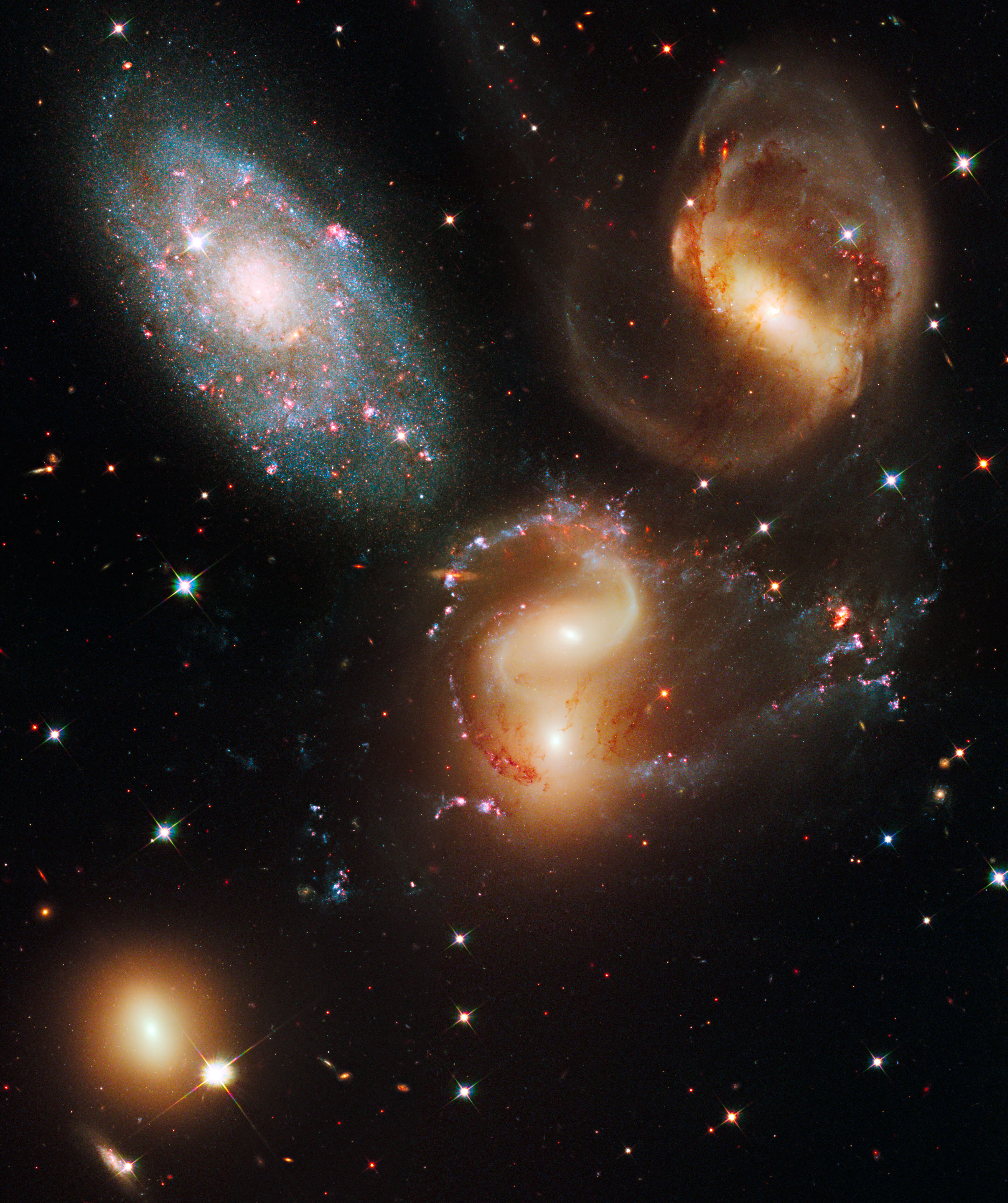 Photo Credit: CNS photo/courtesy of NASA - Stephan's Quintet, a compact group of five galaxies 280 million light years from Earth, is seen in this image from the Hubble Space Telescope.

Gazing at the heavens above

I’ll bet you did this when you were a kid: On a clear summer night, you would go outside, lie down in the yard and gaze at the stars. Maybe you knew the constellations and maybe you didn’t, but the longer you peered at the heavens — especially if the moon wasn’t too bright — the more you saw.

At first it was the planets and the brighter stars; later the Milky Way would come into view and, after a few more minutes, some of the other, smaller stars would appear, flickering just at the edge of your peripheral vision. Deeper and deeper into space you would look until finally, overwhelmed by the immensity of it all, you had to close your eyes or look away. I remember actually feeling a bit giddy when I did this, as if I were falling into eternity or perhaps into the heart of God Himself.

No matter where we live on the face of the Earth, no matter our culture, geography, climate or political system, the one thing all people share in common is the sky that covers us. When we look at it during the day, it seems almost homey and comfortable, filled with color and clouds and the weather we will have to deal with for the next few hours. We talk casually about it as we pump gas, drink coffee or wait for the kids to get out of school. “What a stretch of weather we’re having,” we remark as we look up into azure blue. “At least the gardens appreciate the rain,” we say again as the gray clouds press down on the mountains. Red in the morning, sailors take warning; red at night, sailor’s delight. For how many centuries have we been saying that?

At night, however, that same sky assumes a very different demeanor. It ceases to be quite so innocuous, and our casual conversation turns instead to awesome silence.   We are beckoned by the stars into the immensity of transcendence, which makes us feel very small indeed. We can approach this sky too, but on very different terms.

I remember one November night when my son was about 10, we went outside with our heavy blankets and ground cloths to watch the Leonid meteor shower. As we arranged ourselves on the ground to get the best view heavenwards, we began to catch sight of the “shooting stars” as they fell through the atmosphere. Soon, the sky was full of them and for at least an hour or two, it was as if heaven was raining down on the Earth, not the cloudburst of a summer afternoon, but the starburst of something even more powerful and decidedly Divine.

It is no accident that when we speak of God and heaven, we instinctively look up.   Whether it is gentle day or awesome night, we too join the psalmist: “I will sing of your majesty above the heavens. … How awesome is your name over all the Earth!” (Ps 8).