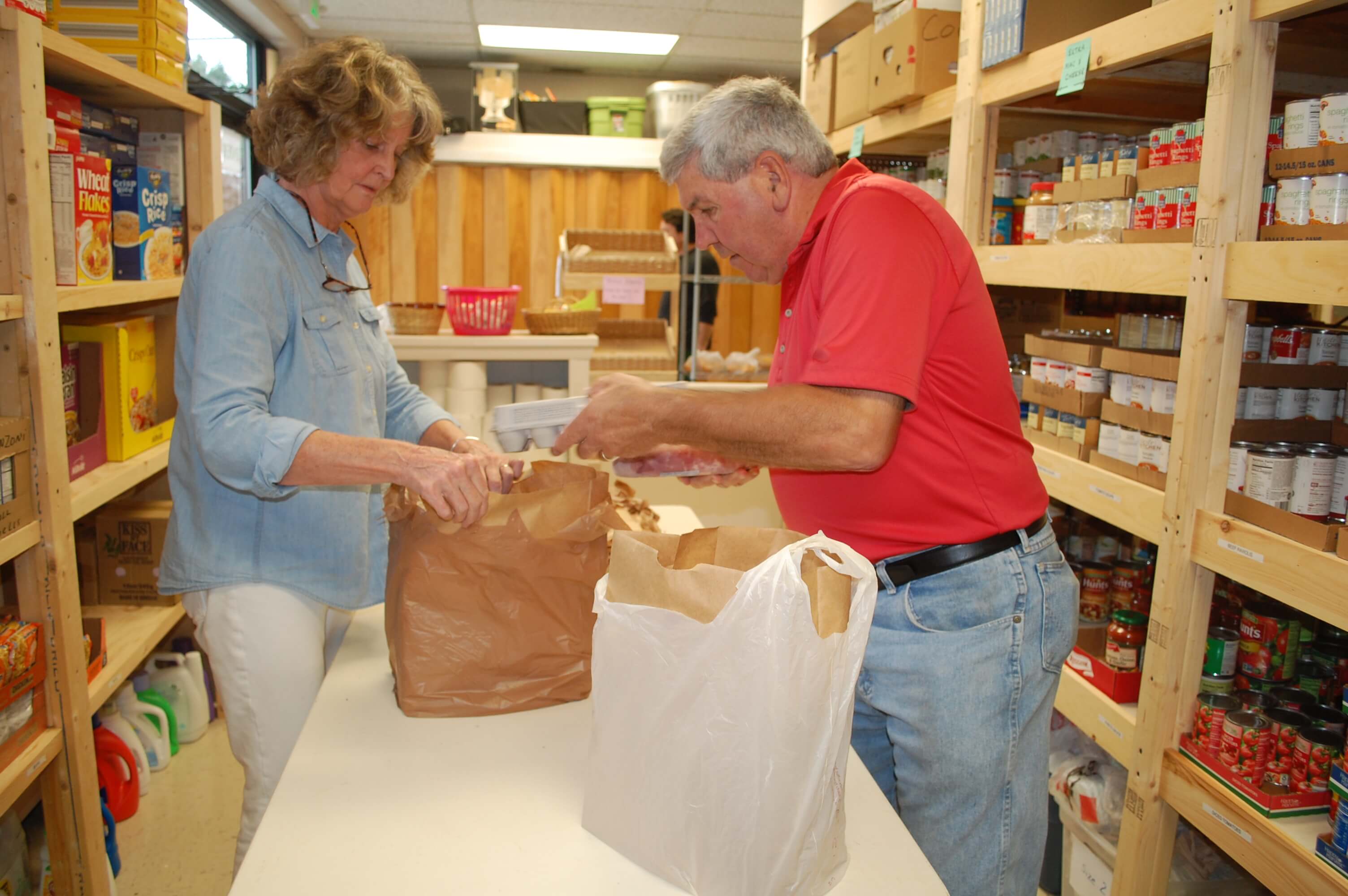 Photo Credit: Vermont Catholic/Cori Fugere Urban - Ellen Reiling and Ed Raetz, volunteers at HIS Pantry at Sacred Heart St. Francis de Sales Church in Bennington, pack groceries for a guest at the pantry that serves about 180 families each month.

For more than 25 years, HIS Pantry has been providing people in the Bennington area with food they need to feed themselves and their families.

Originally located in a small room across from the parish office, the pantry expanded into classrooms and even onto the stage to keep up with demand.

By remodeling two classrooms and two storage rooms downstairs, the parish was able to provide the pantry with more than 1,400 square feet of space to meet guests, to distribute food and some household items and to store food.

According to the United States Census Bureau, in 2017 13.9 percent of Bennington County’s population lived in poverty; the percentage is higher for Bennington alone.

HIS Pantry is part of a network of services to help those in need.

Mary and Jeff recently came to the pantry for help feeding their three children. “It has been a relief,” said Mary, who moved to Bennington seven years ago with her two children. “We need the help.”

She is looking for a job, and Jeff recently lost his. “Everybody goes through hard times, and they [volunteers at the pantry] understand that,” she said. “They don’t judge you. We’re not ostracized for not being able to provide food for our family.”

Most people access food from the pantry once a month, though those who can show special need — like those who are homeless — can do so more often.

Each month the pantry serves about 180 families, though at times it has reached 240.

Food comes from the Vermont Foodbank, store donations and donations from parishioners and others or purchased with donated funds.

“Their generosity is wonderful. Every day there are bags of food coming in,” said Joni Charbonneau, interim pantry director. “It’s the Christian spirit.”

Added Father Wiseman: “People see there is tremendous need,” so they give.

Sometimes people share the bounty of their garden or donate other items like juice, soap, toothpaste and laundry soap to help the pantry’s guests.

There are about 40 active volunteers who work in groups of about a half dozen when the pantry is open.

Ellen Reiling has been volunteering at the pantry for three years. “No one should be hungry,” she said.

Another volunteer, Ed Raetz, said on his first day of volunteering, “I thought this was a good project, and it’s good to help out anybody you can.”

Mary, the guest who came to the pantry with Jeff, said the world would be a better place if everyone helped others.

“To help people who need help is part of what God’s message is,” Jeff said. “Love thy neighbor.”