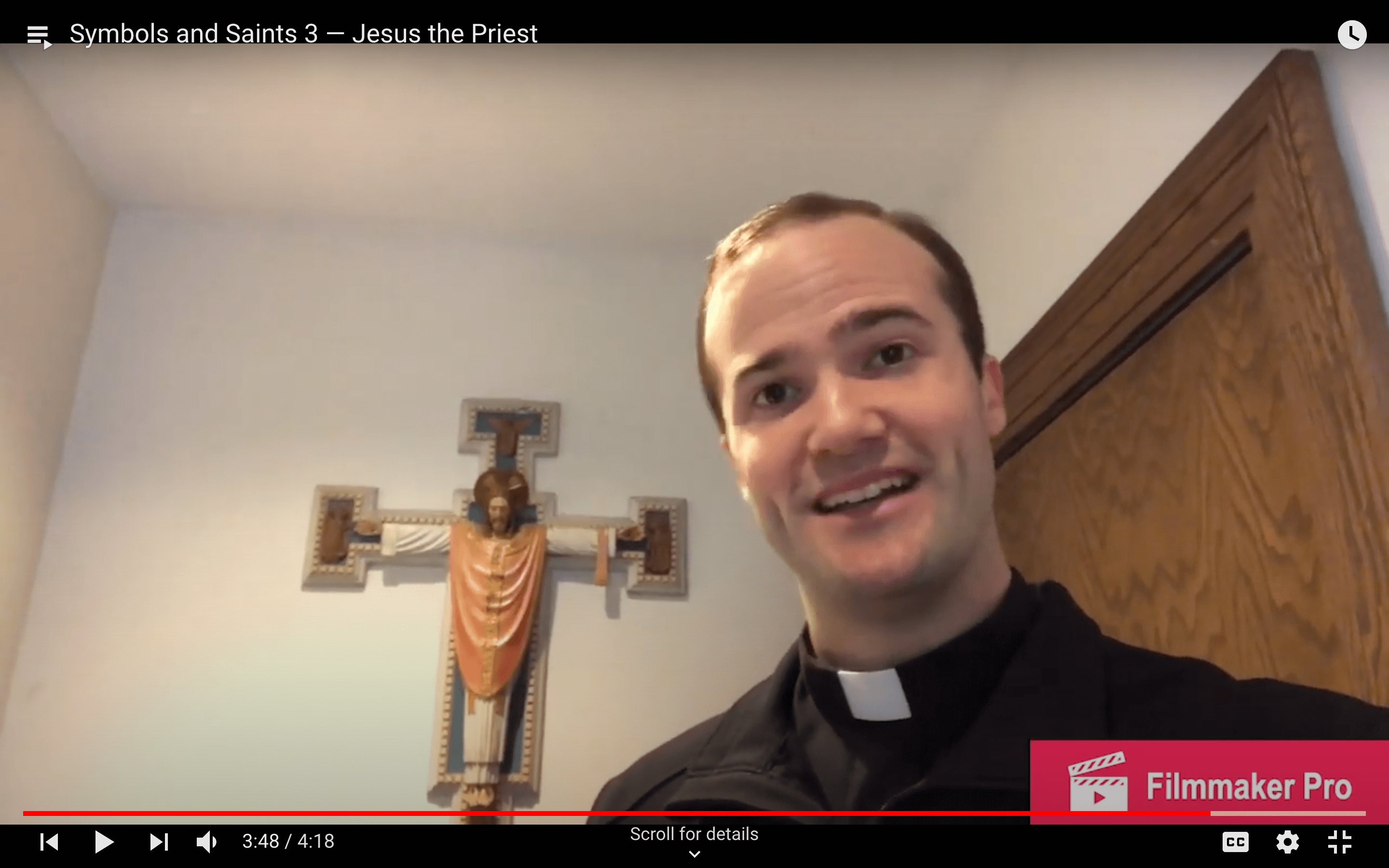 Photo Credit: YouTube screen shot - Father Matthew Rensch, parochial vicar of the Rutland-Wallingford Catholic Community, explains the symbolism of a crucifix with Jesus depicted in priests’ vestments. This is from one segment of his Symbols and Saints series.

What do vestments, an upside-down anchor, St. John of Nepomuk, a pelican and St. Joseph’s flowering staff have in common?

They are all explained in Father Matthew Rensch’s YouTube series Symbols and Saints.

The parochial vicar of the Rutland-Wallingford Catholic Community began the series in March as a response to the Covid-19 pandemic that necessitated the closing of churches in the Diocese of Burlington for the public celebration of Mass.

He and the pastor, Msgr. Bernard Bourgeois, both began video series as a way of reaching out to parishioners and keeping them spiritually nourished and connected with the parish during that time.

“I have always enjoyed the symbolism within our churches and the representations of the saints; the symbolism is almost like a secret code, hiding invaluable and fascinating wisdom about what we believe and the saints who have preceded us,” Father Rensch said. “I wanted to unveil some of those hidden gems for the parishioners, as well as give them some virtual views, at least, of their churches while they were unable to enter them physically.”

He selected statues, windows, images and decorations that contained symbols that he found exciting and judged would “require some explanation in order for someone to appreciate the exciting treasure encoded within,” he said.

In looking at the symbols found at Christ the King and Immaculate Heart of Mary churches in Rutland and St. Patrick Church in Wallingford, Father Rensch came upon a stained-glass window in St. Patrick’s that had a small depiction of a fish on a book.

“The fish mentioned in one of the videos was lying on top of a book. I had never come across that depiction before and was unsure of its meaning,” he said. “Individually, of course, those are Christian symbols with a fairly definite meaning. But I was unsure of their significance as depicted together in the stained-glass window.”

After mentioning it on the YouTube program, “parishioners came to my rescue,” Father Rensch said. Someone told him it is the symbol for the Apostle St. Simon the Zealot. “This led me to discover the symbols for all the apostles, many of which are present in St. Patrick’s in Wallingford,” he added.

Each symbol and saint held a particular enjoyment for the young priest.  One, the upside-down anchor as a symbol of hope “is so downright clever,” he said, acknowledging, however, that his favorite of the symbols is Jesus on the cross depicted as a priest: “It is such a rich theological statement.”

Father Rensch has had some help from parishioners with filming and some research.

He has received much positive feedback on the series. “The best reactions were when parishioners said that they were familiar with the image, but the explanations allowed them to really see the image for the first time,” he said.

The last video has been filmed. “As the churches open back up, it’s time to enjoy the symbols in person,” he concluded.