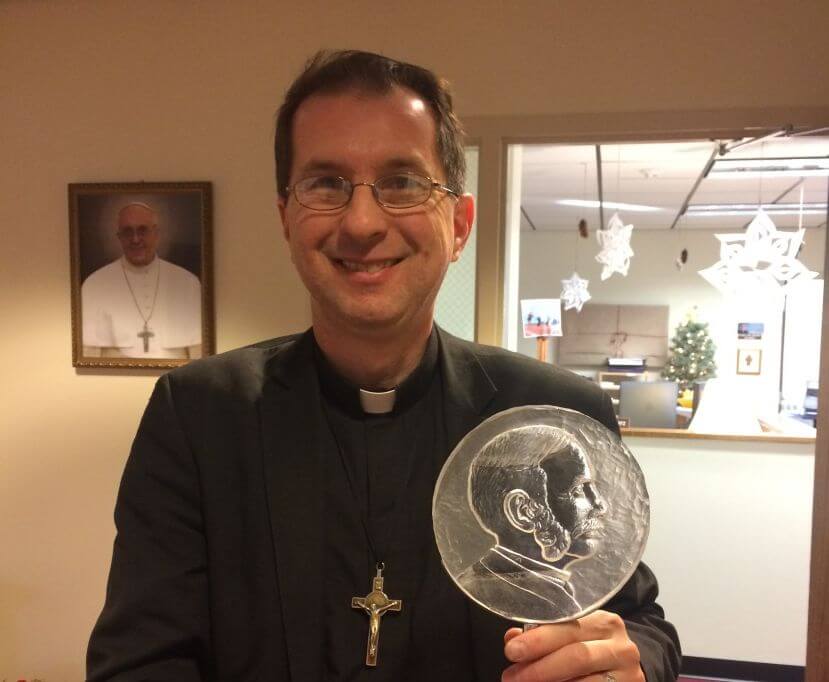 Father Lance Harlow, rector of St. Joseph Co-Cathedral and Cathedral of the Immaculate Conception parishes in Burlington, has received the Rev. Charles Albert Dickinson Award for outstanding contributions to the field of child welfare and commitment to transforming the lives of children and their families from Kurn Hattin Homes for Children in Westminster.

The award was presented on Dec. 14 at the annual Christmas concert, and Stephen Harrison, executive director, read his contributions to Kurn Hattin Homes.

Father Harlow is a longtime volunteer and supporter of the residential school.

“I was very much surprised, but also pleased, that the St. Nicholas Project, which I
founded in 2015 to link the Catholic Community in Vermont with the works of Kurn Hattin Homes, had indeed made a significant impact on supporting the homes,” Father Harlow said.

This fall, through the generosity of donors, The St. Nicholas Project raised about $25,000, “but more importantly brought attention to the good works of Kurn Hattin across Vermont, many states in the United States and Canada,” he continued. “While I am humbled and pleased to receive this award, I am also inspired to keep the charitable works of the St. Nicholas Project moving forward.”

Since 2013, Kurn Hattin Homes has presented the Rev. Charles Albert Dickinson Award, the founder of Kurn Hattin Homes in 1894, to a recipient who has made a significant contribution to the field of childcare at Kurn Hattin.  The award features an engraved profile of Rev. Dickinson etched in glass.

Since 1894, Kurn Hattin has helped thousands of children and their families by offering a safe home and quality education in a nurturing environment.

The St. Nicholas Project seeks to invite the Catholic community in Vermont to participate in the good works taking place at Kurn Hattin. “Since the Catholic Church in Vermont no longer has an orphanage or any direct child-care-related ministries, it seemed the perfect relationship for Catholics to perform works of mercy and experience the joy of loving Jesus in these children who come from difficult circumstances,” Father Harlow said.

He became involved with Kurn Hattin when he was pastor at St. Charles Church in Bellows Falls in 2005, not far from the school. He was invited to give the benediction at the annual Veterans’ Day Ceremony, and the director of music, Lisa Bianconi, asked if he played any musical instruments. Upon learning that he did, she recruited him to play trombone in the low-brass section of the middle school band.

Because there are some 100 students in the music program, adult musicians help them. Father Harlow can play a variety of instruments, so he performed with the jazz band, marching band and select choir for six years.

As pastor of St. Charles, he also helped with the religious education of the
Catholic children, baptized and conferred First Penance and First Communion.

After he was transferred to Chittenden County, it became more difficult for him to travel to Westminster to participate in the concerts and other public events, so he became more involved with fundraising for the Kurn Hattin.

Father Harlow is traveling to his eight former parishes to celebrate a Mass of
Thanksgiving and speak about the St. Nicholas Project, and on May 8, 2018, there will be the grand finale Mass of Thanksgiving at his home parish of St. Francis of Assisi in Windsor at which the Kurn Hattin Select Choir will sing. “Everyone is invited to attend the Mass and reception following — and meet some of the children and staff from the Kurn Hattin Homes for Children,” he said.

“His work for us is astounding,” enthused Stephen Harrison, executive director of Kurn Hattin. “He has a heart for children.”

Harrison said the priest’s ongoing commitment to the school — which generally has 95-105 students in kindergarten through grade eight — “has been a real Godsend in so many ways.”

In addition to raising funds and organizing drives for things like clothing, shoes, quilts and pillowcases, the way he has involved people from throughout the Diocese of Burlington is meaningful to the children, Harrison said. “He has touched so many children’s lives and done so through many people in Vermont who might not have ever heard about us let alone assist us.”

For more information, go to kurnhattin.org.