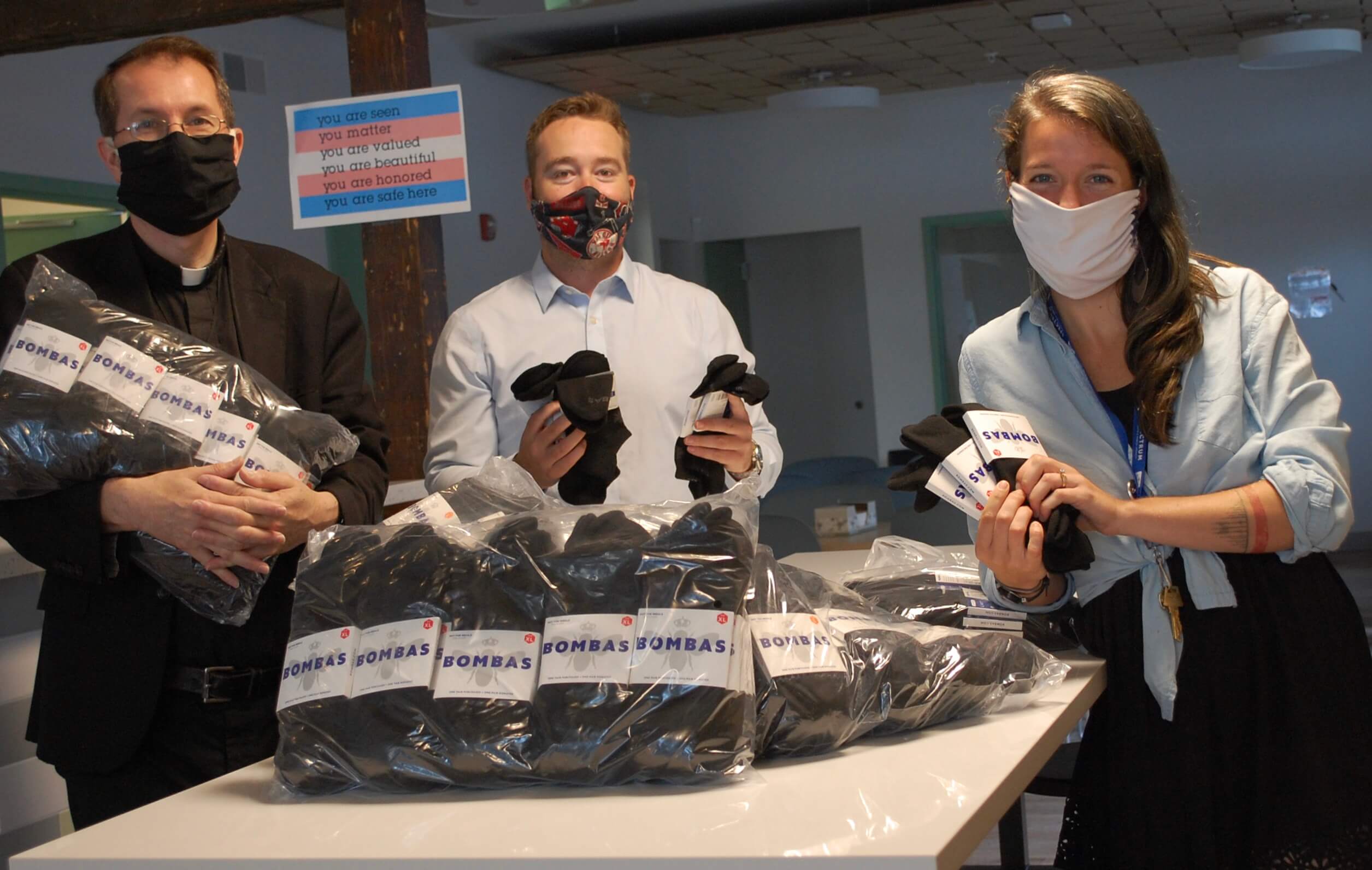 Photo Credit: Vermont Catholic/Cori Fugere Urban - Father Lance Harlow (left to right); Will Town, director of housing and operations for Spectrum Youth and Family Services; and Christina Brown, basic needs program manager for Spectrum, look at a donation of socks the priest brought to the drop-in center in Burlington Aug. 4.

Last month Father Lance Harlow got a delivery of 1,000 pairs of socks, and he didn’t have to foot the bill.

The Bombas Donation Socks are part of the company’s more than 30 million pairs of socks donated to help people in need.

Father Harlow is in the process of delivering the socks to organizations and agencies that help at-risk children, the homeless and others in need; he recently made a delivery to Joseph’s House in Burlington, Kurn Hattin Homes for Children in Westminster and Spectrum Youth and Family Services in Burlington. Some socks he will reserve for the teen warming shelter at the cathedral when it opens during the colder months.

“God is generous,” Father Harlow said. “A thousand pairs of socks is an example of how we should love without stinginess.”

In addition to the 1,000 pairs of short socks donated to him for distribution from Bombas was another 450 pair of crew socks — all black — Bombas donated to the St. Vincent de Paul Society of Mary, Queen of Peace Parish in Winchester and Hinsdale, New Hampshire. The society shared the socks it received with Father Harlow before he received the donation from Bombas directly.

“This is a ministry of love,” he said. “When you do it for love, God will bless that.”

An anonymous supporter of Father Harlow’s Kurn Hattin and Spectrum charities from Northwood, New Hampshire, facilitated the Bombas sock donation he received in four large boxes. She understands the thrill of giving, he said. “It’s not selfish to feel good about giving. It’s part of human nature. God created us to give of ourselves. It’s natural to feel good about giving. It is a reflection of God giving of Himself to us.”

The rector of St. Joseph Cathedral in Burlington, he encourages everyone to find his or her passion for giving, whether it be to the homeless, to disabled veterans or to children in need — to anyone in need. “And let it be thoughtful” giving, not just giving to get rid of what is not wanted. “If love is not your motivation, you’re going to feel empty.”

Father Harlow praised the “amazing generosity” of Bombas, saying the company is an example of the “modern sense of entrepreneurship which sees itself giving back to the community.”

According to the Bombas website (bombas.com): Bombas was founded on the philosophy of donating socks to those in need but has evolved to go deeper into the community. The more clothing items we sell, the more we donate. As we grow, our giving and community efforts will continue to grow right alongside us. One purchased = one donated.

Will Town, director of housing and operations for Spectrum Youth and Family Services, said people he serves will be excited to get new Bombas socks. “They are high-quality and name-brand socks,” he said. “It will be nice for them to have something new.”

Christina Brown, basic needs program manager for Spectrum, wears Bombas socks for running and hiking and appreciates the unique joy of a new pair of warm socks and the comfort they provide. “They stay dry and are durable,” she said of Bombas socks. “They are as close to the perfect sock as you can get,” she said.