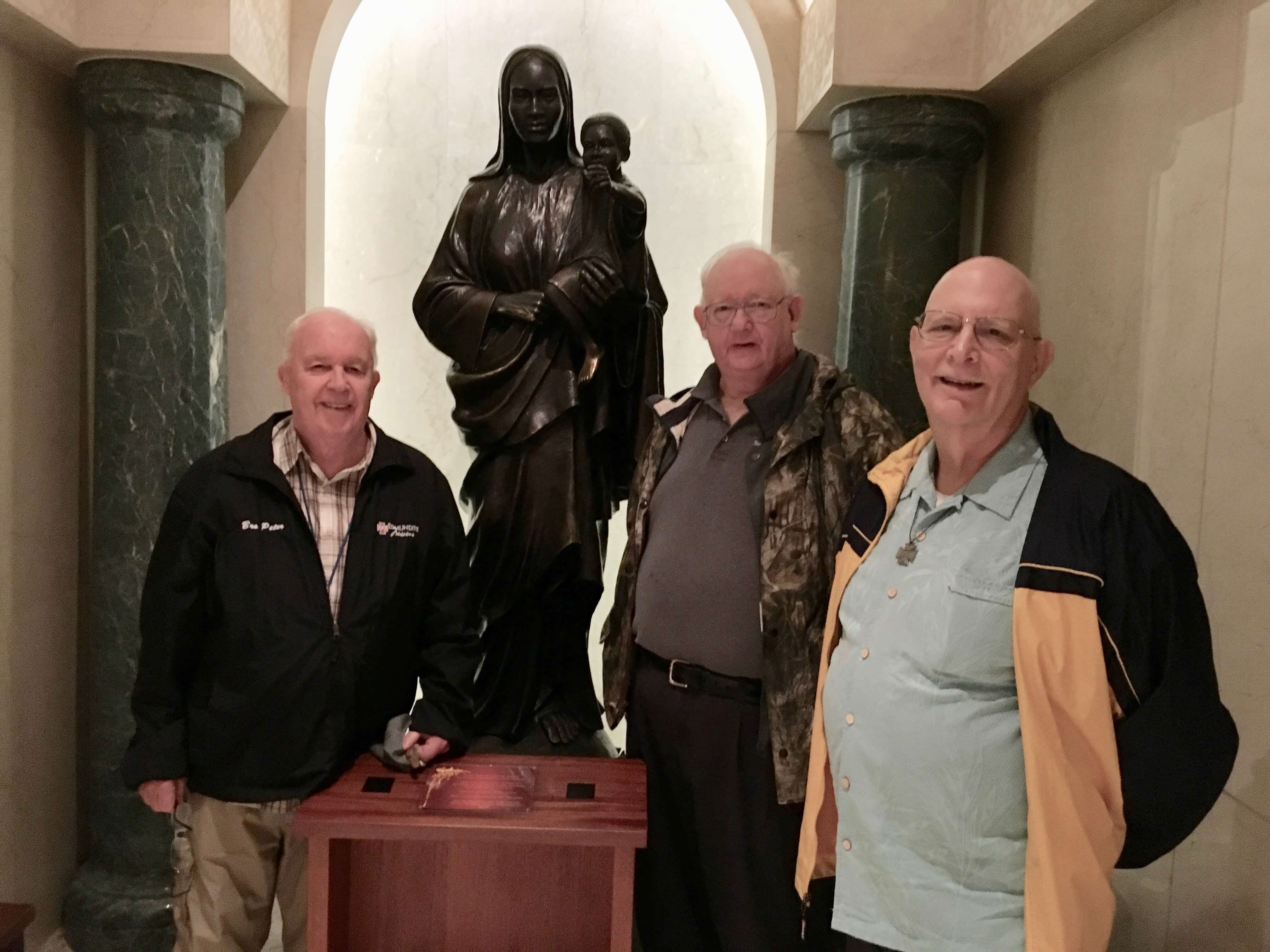 Jesus came to tell us love is the highest virtue, and as Christians we know this sacred love means taking action. It’s boots on the ground by all of us, not so that we will be loved, but because we are already so fully loved by God. Discerning His will for our life is sometimes a frustrating unknown. But ultimately it’s about quieting our mind enough to discern what living a meaningful life is for us individually. As the Catholic Church celebrates Religious Brothers’ Day on May 1, our Edmundite Brothers took the time to share their take on how to hear our own individual call.

Jesus said in Matthew 23:8 “and you are all brothers” to tell us there should be a common dignity and fundamental equality among His followers. As professed religious, brothers take vows of chastity, poverty and obedience. They leave all material things behind to live with purpose and to answer a call to belong to a universal brotherhood in Christ. Here at the Society of St. Edmund we have three brothers in our midst, Brothers Francis Hagerty, Thomas Berube and Peter Stanfield.

Brother Hagerty began to hear whispers of his call as he sat upon a rock on a forest path in his youth in Mystic, Connecticut. At about the same age when Jesus snuck away from his parents in Jerusalem after Passover to listen to teachers and ask questions, he admits he got more than a little inquisitive as well. Through contact with Edmundites who ministered in his Catholic parish and taught at his high school he got to know the Society of St. Edmund; and through frequent, quiet contemplation on his rock near his home, he came to some early conclusions about his vocation.

Vocation is a word used to describe God’s calling in our lives. The most common and celebrated in our culture is the vocation of marriage, which is as much a response to God’s call as becoming a priest, or religious brother or sister — who take their vows to serve God and His people through prayer and service. For each of us, discerning a vocation takes time and patience in periods of prayer and contemplation. Have you ever asked yourself, “What does God want for my life?”

Brother Hagerty laughed as he told his tale. He was at that point in his life where he wanted to discern where the Holy Spirit was leading him. “So I was on my rock thinking about all of this and about how I could live out my baptismal promises.”

The Peace Corps was big back then, he said. John F. Kennedy was president. “But that was only a temporary commitment. I felt strongly that God was calling me to something more permanent. I got to know the Edmundite community and I really liked what I saw. I never considered any other religious community; you could say I ‘fell in love’ with the Society of St. Edmund.”

He celebrates 50 years as an Edmundite this year. He served in emergency medical services for many years at St. Michael’s College in Colchester and worked as a registered nurse and nurse practitioner in Venezuela, Vermont and Alabama. He has also been a teacher and tutor for preschoolers, elementary school children and recent immigrants.

Today Brother Hegarty is a spiritual director and guides retreatants at St. Anne’s Shrine and elsewhere. He also serves as a prison minister at two Vermont prisons, leading a Liturgy of the Word and communion service, talking about spirituality and leading people in song. He also works with disabled veterans in Project Healing Waters Fly Fishing.

“For me, it is a question of, ‘What are the needs of the people we serve? And how can I use my gifts, talents, abilities and interests to meet those needs?’ Edmundites have always been responsive to the needs of people on the margins and are good at collaborating with others. People have told us we Edmundites are ‘on the cutting edge.’ It is a good place to be.”

Edmundite Brother Thomas Berube grew up in Lyndonville. He’s known his vocation since the age of about 19. Brotherhood is about working for The Kingdom of God in a way that marries talents with serving others, he said.

“I felt a calling to do something formally in the Church but was not interested in becoming a priest. My brother, Richard [an Edmundite priest], is the priest in the family,” he said.

Brother Berube explained that religious priests and brothers are members of communities of consecrated life and are all considered equal brothers; the difference is in ministry. The concept of being a brother is a verb — to brother people, to see everybody as family and treat everyone as brothers and sisters.

“I came in as a naive kid with rose-colored glasses on and grew into this,” he said of being a brother. “I had a romanticized sense of it.”

When Brother Berube began to be drawn into religious life he had worked at a summer camp for underprivileged children, and there was a religious brother who wasn’t part of a community but had taken private vows to a bishop. “He was very interested in geology and I was a rock hound,” Brother Berube said. “We would go fossil hunting in the islands.”

That was the summer he began looking into religious communities. His pastor in Lyndonville was an Edmundite, and he had cousins who were Edmundites. “I developed a love for sacramental life,” he said. “God was giving me a nudge.”

That nudge led him to take vows of his own to be an Edmundite Brother who thrived at a pivotal time in American culture. He obtained a degree in psychotherapy and was heavily involved in AIDS ministry in the 1980’s. There was an illogical fear of the disease and some homophobia at that time and hospital chaplains would sometimes refuse to minister to patients, Brother Berube said.

“I was asked to bring a young man communion,” he said. “I did that every week all the way through the night before he died. That was meaningful for me. This crystalized my chosen vocation — something needed to be done and I was not afraid.”

After earning his master’s degree Brother Berube worked in Boston and at The Howard Center in Vermont. He loves photography, gardening and geology. As for how to hear our own vocational call, he said, “God doesn’t put it in big letters and write it across the sky. He gives you lots of hints and whispers.”

Brother Stanfield received those hints and whispers at the age of 25. He calls it a “delayed vocation” since he had chosen the life of a London stockbroker initially. His mind had been on money since the days of counting it for the Edmundites at his parish when he was 14 years old. He went on to obtain a degree in economics.

“They were cool American guys, some were in the military and some had paper routes, but they were all relaxed and joy-filled,” he said of the Edmundites he grew up with.

He chose to follow in his father’s footsteps and learned how to make a lot of money for himself and others in spite of warnings from his father about the industry. “This money business is about whatever it takes to make more money,” Brother Stanfield said. “It was about doing what I was told by my employer even if it was morally wrong.”

A few years in, he heard a call. It was a quiet urging in his soul that whispered, “You can do this, Peter, get out of this rat race.”

But how, he wondered. He explained this felt like the Gospel story when the apostles knew nothing but were called to follow Jesus. “I thought if they can, I can,” he said. “And from there it was all God’s doing.”

As he contemplated making some life changes he went to the ocean for a few days. He set off to explore a cave with the latest tech gadgets of the time in his grasp, a handheld radio and camera. “I don’t remember the fall,” he said. “But when I woke up my back was raw from hitting rocks on the way down.”

He fell 80 feet into shallow water. “The doctor said hitting that salt water was the best thing for me. It healed up my open wounds quickly,” he said. “I had no broken bones. I knew God had taken care of me. I knew right then that I wanted to spend the rest of my life taking care of other people, and I immediately thought of the Edmundites. This was a call to be other-centered.”

Back then leaving for America meant leaving forever. That was a great leap in those days. He laughed as he remembered the headline in his local London newspaper read, “City financier turns to America to become a monk in abject poverty.”

What about that vow of poverty? It’s simply recognizing where our culture is needlessly consumer-based and deciding to focus on relationships instead. It’s a focus on serving to the needs of humans and not on material gain, Brother Stanfield said.

He landed at St. Mary’s in Greenfield Park, Quebec, went on to Essex Junction and then to Mystic, Connecticut. He’s been ministering to the needs of the people in Selma, Alabama, for the last 20 years. This year he celebrates 50 years as an Edmundite brother and said he feels blessed beyond his dreams. “I have never had to worry about work, finances or personal desires,” he said. “Everything in my life since I became a brother has been fulfilling. It is a gift. And I bring that gift everywhere I go.”

People often tell Brother Stanfield he is the reason they get up in the morning. Today he works with the homebound and sick. “God gave me the strength to make changes,” he said. “God has made all of this possible. Choosing to be a brother is a special call. It is to deny oneself for something greater.”

For more information about The Society of St. Edmund or choosing your vocation visit SSE.org or call Father Lino Oropeza at 802-654-2344 or email him at linooropeza@gmail.com.