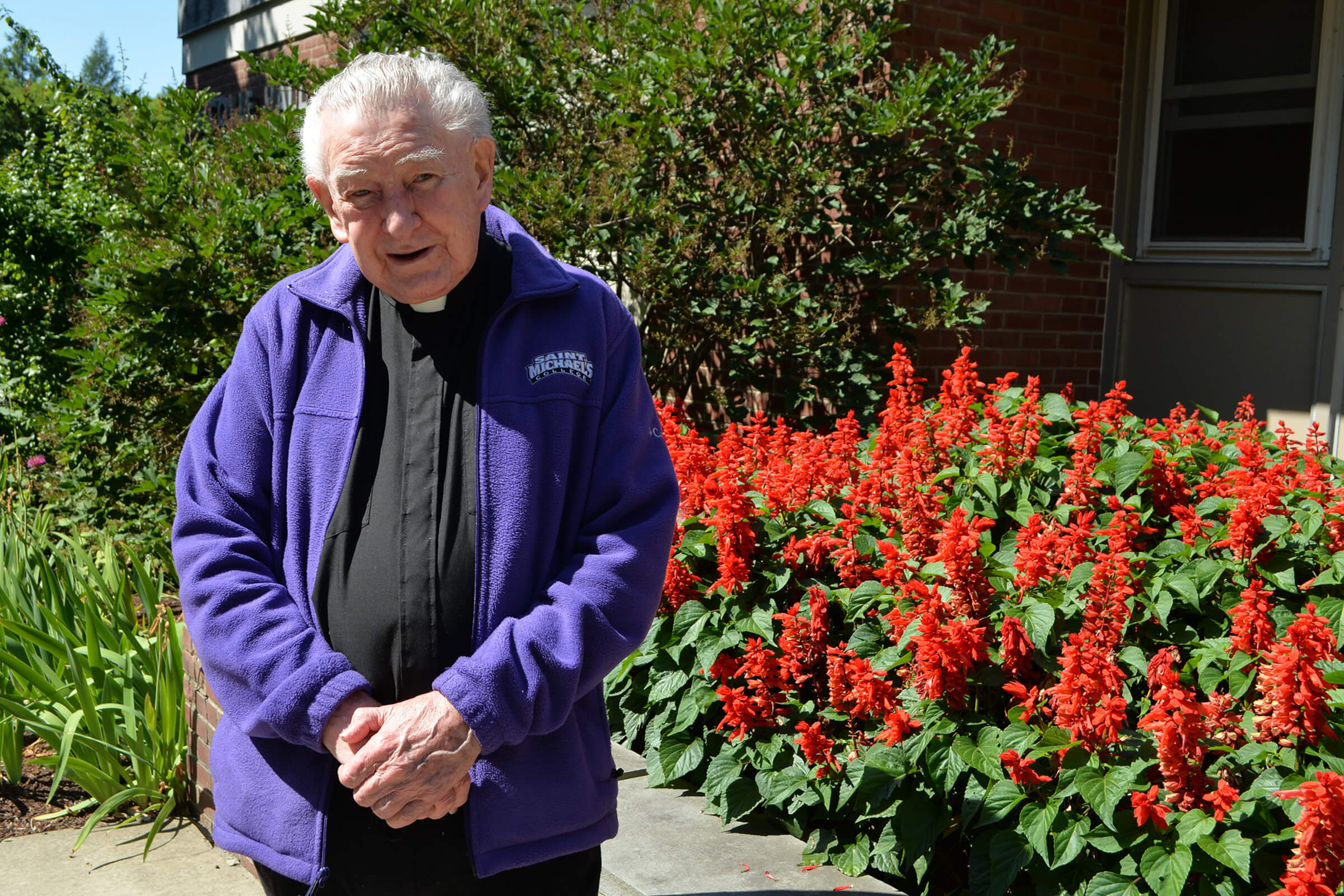 Photo Credit: CNS/Lynn Monty courtesy Society of St. Edmund - Father Ray Doherty poses for a photo on the campus of St. Michael's College in Colchester, Vt., Aug. 12, 2019. Father Doherty, 89, a member of the Society of St. Edmund, will be awarded the St. Edmund's Medal of Honor Oct. 25 at Enders Island in Mystic, Conn. The medal is presented to men and women who, like St. Edmund, see talents and expertise as God-given gifts.

Edmundite priest says his life has been about serving God, God’s people

The St. Edmund’s Medal of Honor is presented to men and women who, like St. Edmund, see talents and expertise as God-given gifts. These are ordinary people doing extraordinary service for the church and community.

This year among those being honored for such a life of service is Father Ray Doherty, 89, who is an admired presence on the campus of St. Michael’s College in Colchester.

He is a member of the Society of St. Edmund, which founded the Catholic college, but belonging to the religious community is not a prerequisite for receiving the medal.

Other recipients this year are Stephen Moran, founder of Crossroads Physical Therapy and Camp Care in Columbia, Connecticut; Janet Steinmayer, president of Lesley University in Cambridge, Massachusetts, and former president of Mitchell College in New London Connecticut; Redemptorist Father Philip Dabney, former vicar of “Boston’s Basilica,” the Basilica and Shrine of Our Lady of Perpetual Help; and Travis Moran, founder of Crossroads 4 Christ Young Adult Ministry, also based in Columbia.

The awards will be presented Oct. 25 at Enders Island in Mystic, Connecticut. This event celebrates the lives of those who reflect the legacy of St. Edmund, the archbishop of Canterbury and patron of Enders Island and St. Edmund’s Retreat.

St. Edmund’s Retreat at Enders Island is a scenic 11-acre island in Mystic where people from all walks of life come to experience renewal, healing and inspiration.

Although semi-retired now, Father Doherty is still quite active at St. Michael’s College. He serves on the college’s board of trustees, the board of its fire and rescue squad and on the advisory board of the college magazine. He also still participates in college Chapel Masses, which are celebrated daily.

“I help out any way I can,” said the priest, who is a native of Newton, Massachusetts. “I am not quite as strong as I used to be, but I do what I can.”

“I have always considered him my spiritual adviser and continue to meet with him,” Flanagan said. “He is and has always been a great role model for me. We consider him a part of our family and I am certain that others would say the same. We all are better people for having known him during his life of service to God, St. Michael’s College and country.”

When asked why he was receiving this Medal of Honor, Father Doherty said: “The Edmundites are really good at not putting on airs, not striving for honors. We all like to be honored but generally we are simple in our lifestyle and down to earth with the people we work with.”

As a staff sergeant in the Marines during the Korean War, it was the education he received from St. Michael’s College that saved him from having to go to Korea.

“I got into journalism and was editor of the college newspaper,” he said. “Thank God for John Donoghue. He was a beautiful man and a mentor to me — a second father. He trained me in journalism well. The Marines needed a public information officer. I was promoted to combat correspondent but never saw combat, thank God.”

The college also played a starring role in his lifelong vocation.

“I had never known priests that well until coming to St. Michael’s College where I got to know them personally,” he said. “When I started thinking seriously about priesthood, I naturally thought of the Society of St. Edmund.”

As for his life of service, Father Doherty said he doesn’t like to be overly pious about these things. “But I do think sometimes it is the case that the Holy Spirit intercedes. My whole life has been centered around serving God and God’s people, to put it very simply and briefly. I could do a lot better, I am sure. That’s my goal anyway.”