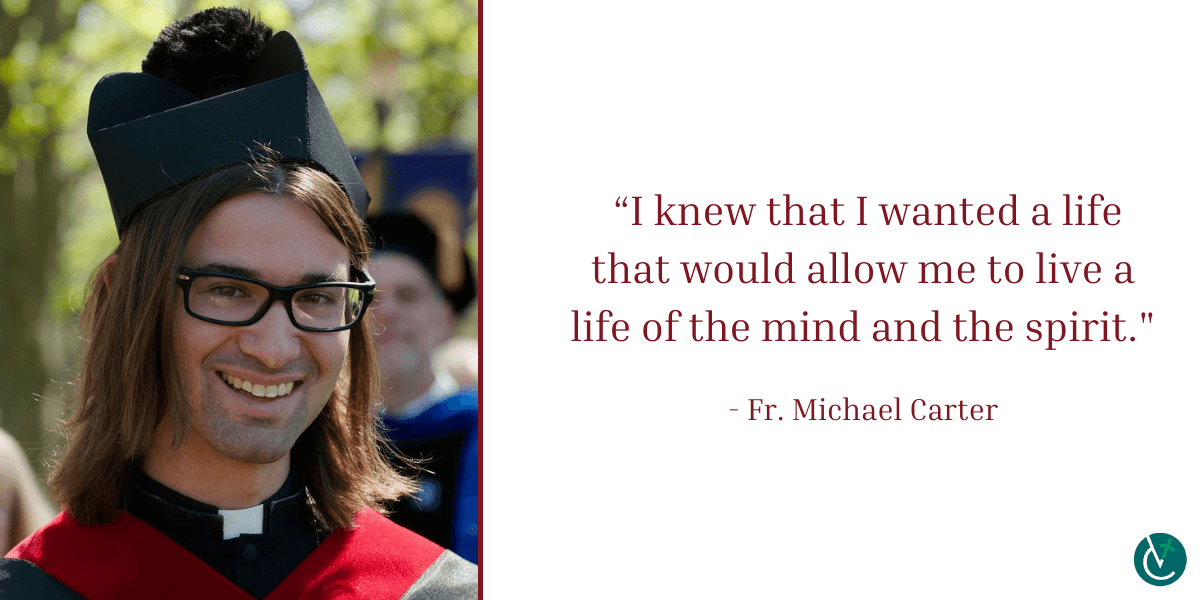 Edmundite Father Carter studies the Church through a historical lens

The human element of Church history is most intriguing to Edmundite Father Michael Carter.

“There’s a tendency to think of people in the past and the situations they faced as strange and exotic, but they were people just like us, possessed of the same God-given strengths and human weaknesses that we all hold within us,” says the lecturer at St. Michael’s College in Colchester, a liberal arts college founded by his religious order.

His focus is introductory-level Religious Studies courses like Christianity: Past and Present and Varieties of Christianity.

“The history of the Church is strongly intertwined with the broader history of the Western world. How a very small movement in a very limited region grew to become a global religion is fascinating on many levels,” he says, noting his intrigue with times of transition in human history. “The Christianization of the Roman Empire and the spread of the faith in a world that was previously so hostile to it is a story worth understanding on a deeper level.”

According to Father Carter, an accurate knowledge of Church history shows that nearly every aspect of the collective faith experience has shifted, grown, developed and changed over time. “There are certain eternal truths of our faith that remain unchanging, but the ways in which people articulate, understand and engage with their faith experience is mutable: The Church of Jesus’ time would look radically different from the Church of the year 1000, and that medieval Church would look very different from the Church of today,” he says. “History shows that the call of the Spirit has always been at work in the Church, allowing the message of Christ to resonate throughout the centuries. The Church is not (or should not) be a museum piece that is frozen in amber, but should rather seek to understand and incorporate the guidance of the Spirit in its growth and development.”

“Religion and spirituality have been interests of mine since I was very young: I was serving Mass from the second grade on. I was always attracted to the artwork in my parish church (St. Anthony in Burlington); it seemed so grand and mysterious to me,” he says.

Growing up he was an assiduous reader, enjoying tales of the Middle Ages and the Roman Empire as well as fantasy stories derived from that history. He remembers his mother’s huge family Bible with a section in the back that was a mini Catholic encyclopedia. “I was beguiled by all the information that seemed so mysterious and unearthly to a young mind,” he says. “I knew that I wanted a life that would allow me to live a life of the mind and the spirit. I also had a sense that there was something theatrical about me: I was able to get in front of people and speak, indeed, I often found that easier than one-on-one conversation.”

When he discovered through the members of the Society of St. Edmund at St. Michael’s College that there was a model of priesthood distinct from parish life, a model that allowed for more contemplative or academic pursuits, he was intrigued. His main contact with the Edmundites at that time was the late Father Michael Cronogue. “He taught me that you could be a priest and also be rather eccentric and have interests and humor that might not be expected in the role,” Father Carter says. “I am eccentric in my own ways, so his example was comforting and influential for me.”

His life changed when he joined the order; he found purpose and identity. “Growing up, I was in many ways shy, uncertain, hesitant and listless,” he confides. “I still struggle with some of those things, but life in the order gave me more focus, routine and discipline. There was something greater that I was working toward and I had support. I was made to step outside myself, and that helped me to grow and mature in ways I hadn’t otherwise done before.”

He was given assignments that forced him out of his comfort zone, and he found confidence in the identity and social role he was finally able to see for himself. “In a spiritual sense, you might call it the influence of the Spirit on my growth and development,” says the recipient of a master of divinity degree from Boston College.

By far the youngest member of the Society of St. Edmund, Father Carter — who often wears his dark hark cut nearly to his shoulders — has worked primarily in the academic world of St. Michael’s College but also in parishes and at St. Anne’s Shrine in Isle LaMotte.

Currently enrolled in the graduate history program at the University of Vermont, Father Carter’s personal interest in history comes from an early exposure to books that opened for him that wide and imaginative world build around the question, What was it like to have lived in the past?

“The past was so different and seems so strange to us at times, yet it was the normal reality for people that lived in a given time, and human nature and the fears, hopes and dreams of people remain relatively similar over the ages,” he says. “In looking to the past, we can see the roots of our existence in the present, and looking at patterns of change and development can even give us some sense of what may happen in the future.”

The American experience in World War I is his primary area of historical interest. “I am fascinated by historical times of transition, and World War I represented in many ways the entry of Western Society into what we would now call the ‘modern world,’” he explains. “I am also intrigued by how World War I and the American involvement is so little known and understood by the general public and understudied in the academy. There are so many discoveries to be made hidden away in archives: I would love to do my small part in shining some light on things.”

Father Carter laments the “glum tendency” to view the current times as the “worst” time for the Church. “I do not believe we are in a uniquely challenging time: The Church has always faced incredible challenges,” he says, advising placing Western experience in a wider context. “We become dismayed over a perceived decline in our own areas, while not always acknowledging the growth and strength of the Church in places like Asia and Africa. There was a time when the whole Church was a handful of people or so after the Crucifixion of Christ, but the community endured and spread. There was a time when the Roman authorities made professing Christianity dangerous, yet hope was not lost. You could select many crises of great depth and magnitude from throughout Church history, and yet the Church has not crumbled. So long as there is a community of dedicated believers the Church will endure: It may not look the way that people are used to, and this might cause angst and discomfort for some, but as we believe in the guidance of the Spirit, we should seek to understand and interpret how the Spirit is calling us to act now and always.”

Father Carter, who appreciates artistic expression in all its forms — visual art, music, film — has a deep interest in cinema and film history and also in music and music criticism. He has film and music reviews published in U.S. Catholic magazine. He likes nature and solitude: “I love long walks and quiet spaces.”

And he has ambitions of a more advanced and formalized academic career, “but that path is yet before me,” he says.