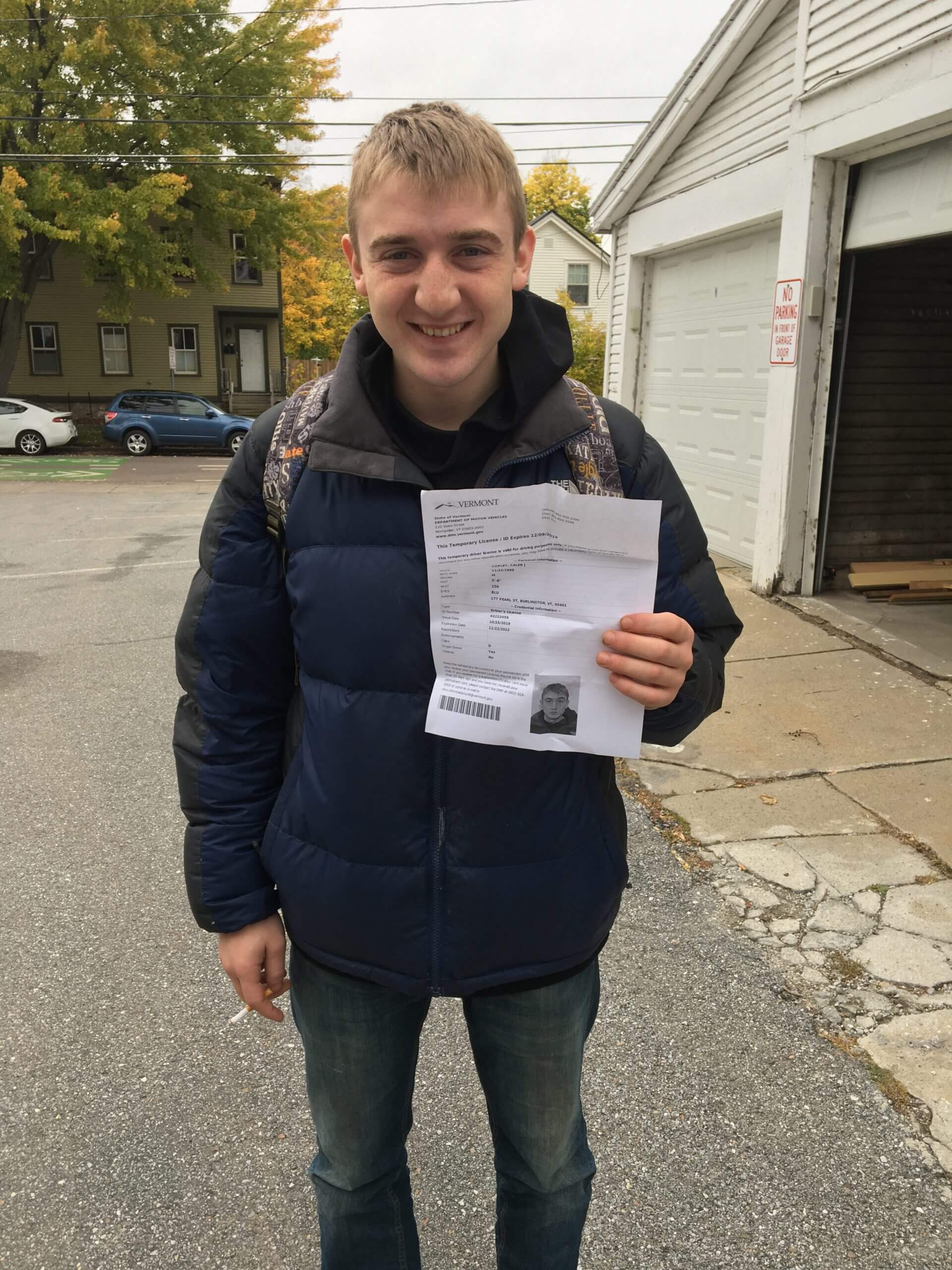 Photo Credit: submitted - Caleb Copley shows his temporary driver’s license, which he obtained with the help of Father Lance Harlow.

It can be said that Father Lance Harlow is “driven” to help homeless youth.

It can also be said that he has been driven by one of the youth he met at the St. Joseph-Spectrum Warming Shelter at St. Joseph Cathedral where he is rector.

Father Harlow helped one of the teens, Caleb Copley, get his driver’s license so he could, as Caleb said, “look for opportunities” to better his life.

“Father Harlow goes above and beyond for the homeless youth,” said Caleb, who spent last winter at the St. Joseph-Spectrum Warming Shelter.

Father Harlow often makes breakfast for the teens staying in the cathedral hall and spends much time listening to their stories and their concerns.

Caleb had asked the priest last spring if he would help him get his driver’s license; he had a permit but had never taken any driving instruction in order to take the driving test.

Father Harlow had three requirements for Caleb before he could practice driving with his car: He had to be free of any drugs and alcohol; he had to have a job; and he had to have a place to live.

Caleb fulfilled all three requirements and returned to see Father Harlow about a month after their first discussion about driving. “At that point I had no good reason to refuse him because he showed so much initiative in meeting all of my requirements. He also had no family to help him, which as a ‘Father’ touched me deeply,” Father Harlow said.

The two spent about three months during the summer practicing all the technical skills for driving. They also reviewed all the material on the written test that the Department of Motor Vehicles publishes on-line.

Many times Caleb worked an 8-hour shift at a Winooski bakery and drove for another hour or hour and a half with Father Harlow. “He was very committed to learning technical skills because he was highly motivated to get his own car,” the priest said.

As Caleb grew in confidence, his driving skills improved. “For me it was very nerve-wrecking not to be in control of my own car while a ‘student driver’ was behind the wheel, so I had to exercise a lot of patience,” Father Harlow said, noting that he often thought of his own driving instruction in high school with David Holloway, a parishioner at St. Francis of Assisi Church in Windsor.

“It’s hard to communicate years’ of experience to someone who is just setting out behind the wheel,” Father Harlow said. “The new driver has to learn from his own mistakes, trust in his own judgment and rely upon good technical skills. Although I could warn [Caleb] about dangers on the road, I couldn’t prevent them from happening once he was on his own.”

When he and Caleb went for the first driving test, Father Harlow thought he was more nervous than Caleb. “I was sitting in the waiting area at the South Burlington DMV with a lot of parents and their teenaged kids. It was great evangelization sitting in my clerical attire among them. My palms were sweating as he left with my car to take the test without me in it,” he said.

Caleb failed the first test but was undeterred and set up a second driving test for two weeks later and continued to work with Father Harlow.

“I think one of the happiest days of my life was when he took his second test and scored a 90 percent on it and then got right in line to get his picture taken for his new license,” the priest said.

Caleb then bought a used car with the money he had saved. The cathedral property manager, Wayne Lefebvre, who also took an interest in Caleb’s situation, looked at used cars with him.

Caleb now drives a 2010 Subaru Impreza. “I can now go anywhere!” he enthused.

“This is definitely a success story from my work with the homeless youth at the St. Joseph-Spectrum Warming Shelter,” Father Harlow said.

Asked how he will “pay it [Father Harlow’s help] forward” Caleb replied, “Help others when I can because I was helped in a time of need.”