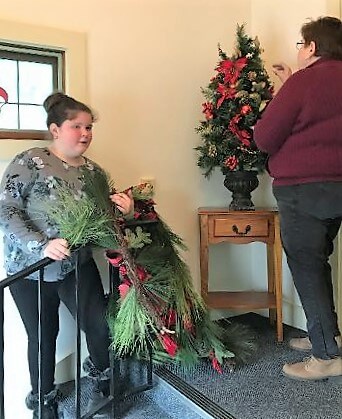 Photo Credit: Submitted - At St. Stanislaus Kostka Church in West Rutland, about two dozen parishioners worked together to inspect the inventory or Christmas decorations and make plans for decorating their church for the Christmas season. “Lights, poinsettias, a splash of red and white throughout the church, with attention to our past create a beautiful, reflective setting for the birthday of the Lord,” said parishioner Mary Reczek.

Do small things with great love

In his 19th-century novel, “Bleak House,” author Charles Dickens created a memorable caricature of what we today might call a “do-gooder.” The indefatigable Mrs. Jellyby, as she was called, labored tirelessly and endlessly for a project promoting the resettlement of impoverished Britons among African natives; to their mutual benefit, she maintained, they would support themselves and flourish by growing coffee, and she could see no cause that was more noble than the one she had undertaken.

There was, of course, one catch in all this. While she spent every waking moment in endless correspondence concerning Africa, Mrs. Jellyby’s own husband and children were completely and woefully neglected. So absorbed was she by her charitable works that she wasn’t even aware of the needs and suffering in her own family.

While we can easily find fault with the shortcomings of Mrs. Jellyby’s idea of altruism — which is what Dickens intended — that doesn’t mean we should overlook the lesson that she may be teaching us. How often do we approach the topic of service to others and immediately jump to the biggest picture we can imagine? When we contemplate the vast needs of a hurting world and the multitudes who need help, we run the risk of feeling so overwhelmed that we end up paralyzed instead of inspired. We decide, erroneously, that our drop in the bucket won’t matter much anyway, so rather than fail — or worse, under perform — we put our light under a bushel basket and move on.

Some indeed are called to do large things, but that is far from the whole picture. It was Jesus Himself who said, “… whoever gives only a cup of cold water to one of these little ones to drink because he is a disciple — amen, I say to you, he will surely not lose his reward” (Mt 10:42). Take a closer look at those words: “Only a cup of water.” It would seem that Jesus is not asking us to save the whole world — that, after all, is what He did — but to hand out cups of water to those who need them, because we are His disciples.

There isn’t anyone who can’t do that, very likely several times a day. As Mother Teresa said, “Not all of us can do great things. But we can do small things with great love.” So reach out to others, family, friends and the individuals we all encounter — store clerks, the kid behind the fast-food counter, the office receptionist and even the people you pass on the street. Be generous with that cup of water; hand out a smile or a compliment. Be sincere with your “thank you.” Let someone else go first.

It may not seem like much, but neither did those loaves and fishes. Just provide the cup; God will do the multiplying.