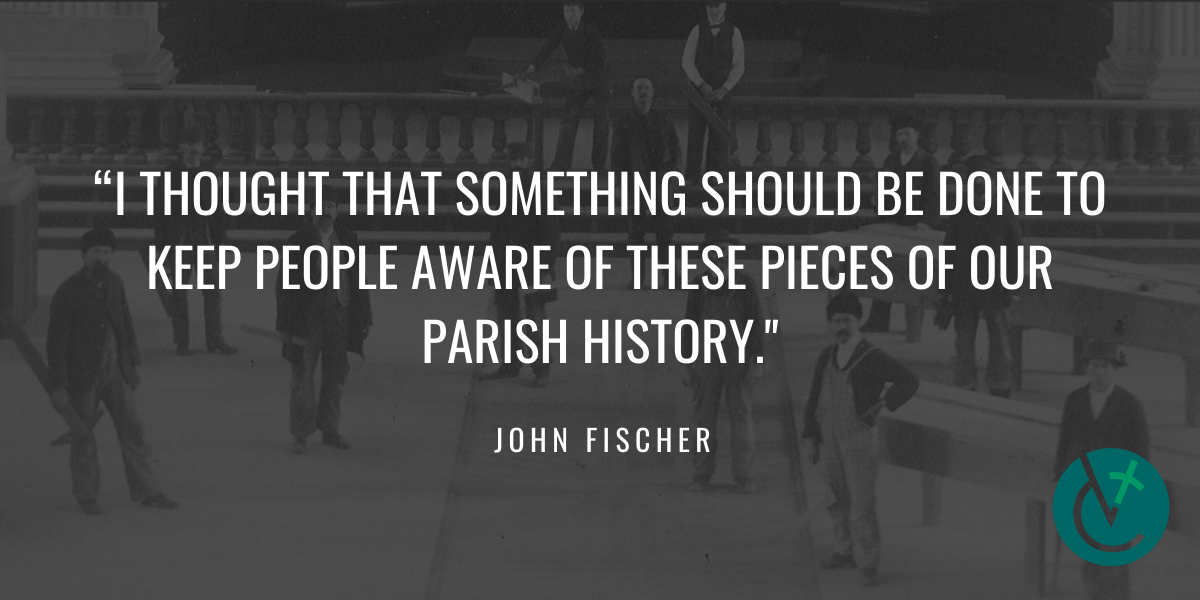 John Fisher’s connection to St. Joseph Church, which would eventually become the cathedral of the Diocese of Burlington, began the day he was baptized in the church five days after his birth in 1940, the tenth of 14 children to parents of French Canadian ancestry.

The family’s strong faith in God and inclusion in the faith family of St. Joseph Parish strengthened them after the death of Fisher’s father, leaving his mother to raise 12 children alone.

After marrying and beginning a family of seven children, the parish that Fisher loved remained the pivotal aspect of his family’s faith and schooling. During the 1990s, when the Internet was born, Fisher began writing website code while employed at IBM and created a website for his department as well as a family website for photos, events, his French-Canadian genealogy and an interest in astronomy.

During these years, explained Fisher, the church and the parish were undergoing renovations and changes due to Vatican II. “I could see that during these changes items dear to the parish were going away,” he said, noting, among them, the huge painting of the Last Supper painted by Sinai Richer in 1923, and a memorial to the 633 parishioners who served in the military in World War II and the 22 who gave their lives.

“I thought that something should be done to keep people aware of these pieces of our parish history. While researching in the diocesan archives, I came across the insurance company photos of both the old Cathedral of the Immaculate Conception and of St. Joseph’s. The cathedral had burned in 1972 and there were many changes at St. Joseph’s. I decided to scan all the photos and put them on my website.

The parishioners of both churches would surely enjoy them,” Fisher recalled. Whenever the ardent archivist comes across an historical piece of information about the Cathedral of St. Joseph he adds it to his website. Fisher explained that parishioners recognize his passion for parish history and often bring him their own treasures which he photo-graphs or scans and presents to the pastor or adds to the parish historical archive.

“Two of these were very significant,” he noted. “An old photo of the early church and a photo of the carpenters in the church about a year before it was completed. It was so historically interesting that I did about a year of research on the photo and the photographer and even had a reunion of the photographer’s descendants from out of state, here in Burlington. Both original photos are now in the parish rectory.”

Most recently Fisher has added photos of two major cathedral projects: renovation and replacement of the steeple and the steps in front of the church. “I created a new webpage for each event and captured some really great photos along the way. The contractor also gave us some really great drone photos of their steeple effort,” he said.

Fisher explained the value of photo archives, saying, “One can write the detailed history of a church or a parish, and the reader can form an image based on what they have read, but as they say, ‘A picture is worth a thousand words.’ In my great 1887 photo of the inside of St Joseph’s, I could describe the interior and the 12 carpenters and what each carpenter is holding; however, the photo says it all; and this event only happened for a moment in time, but it has now been captured and available for all to view today.”