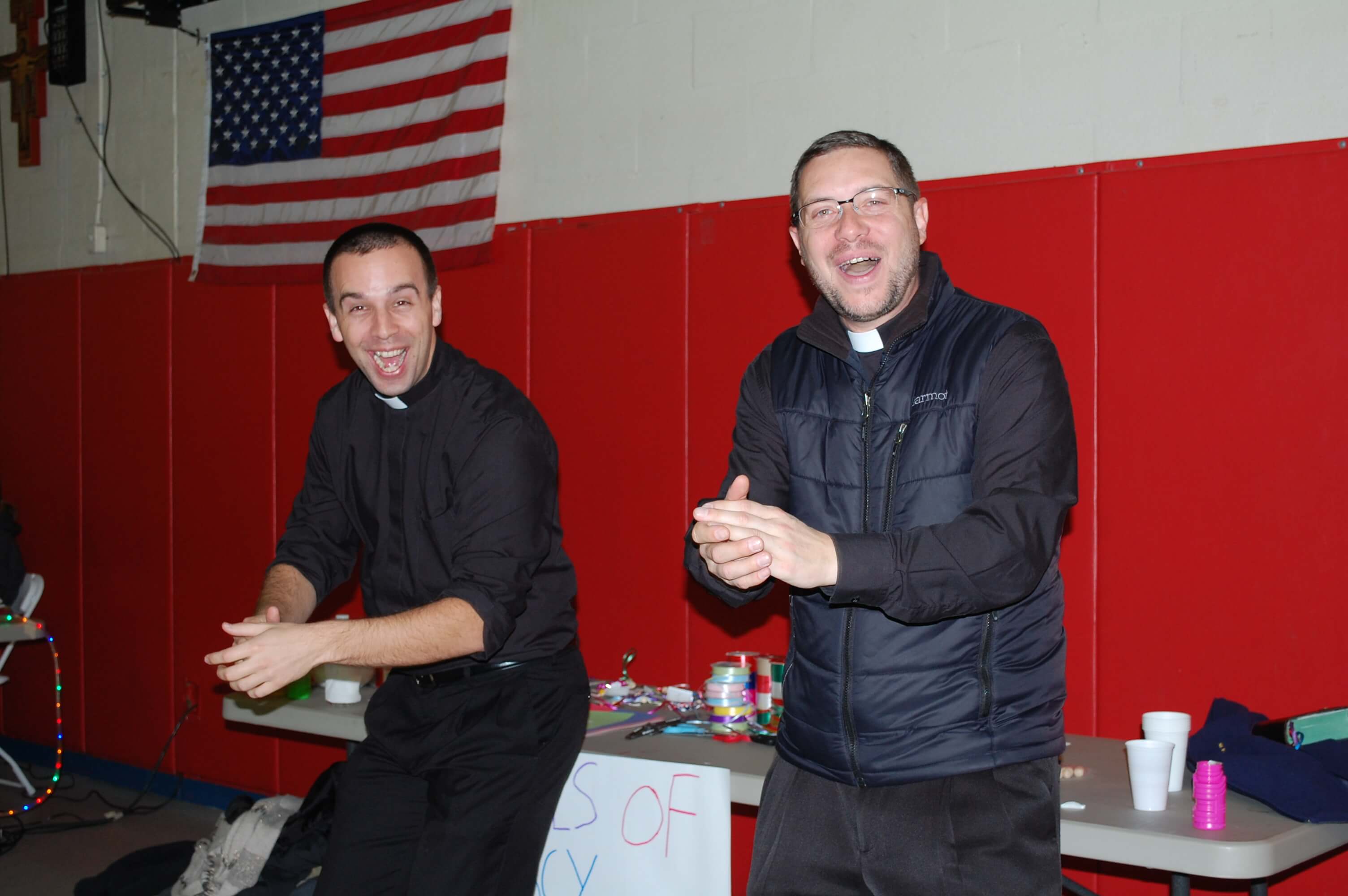 Photo Credit: Vermont Catholic/Cori Fugere Urban - Father Scott Gratton (left), parochial vicar of St. Francis Xavier Church in Winooski, and Father Jon Schnobrich, vocations director for the Diocese of Burlington, enjoy participating in a youth rally. “Parents have to find that delicate balance of supporting their son on his journey of faith while giving him the freedom to explore on his own,” Father Schnobrich says.

The family is the place in which many priestly vocations are first identified, first considered, first nurtured.

“Growing up in a Catholic home, parents should seek to instill in their children not only a love for the faith and personal relationship with God, but a healthy sense of wonder about God’s will for their life,” said Father Jon Schnobrich, vocations director for the Diocese of Burlington. “The idea that culture of faith has nurtured within family members a supportive, pro-vocation disposition, so that a young person grows up with an openness and healthy curiosity about how the Lord may be asking them to make a gift of themselves.”

God offers the possibility of a priestly vocation to a man. For family members and parents to talk openly about this and all vocations in a way that proposes these different possibilities leaves children with a sense of wonder and freedom to respond as they will.

“Parents have to find that delicate balance of supporting their son on his journey of faith while giving him the freedom to explore on his own,” Father Schnobrich said.

The most important ways that parents can encourage their son to be open to a call to the priesthood is to strive for God’s will in their own lives. “When children see their parents trying to be faithful to what God asks of them in their vocations as husband and wife/father and mother, then their son sees what it looks like to put God first in one’s life as the greatest priority,” the vocations director said. “Even though we all fall short, the effort of trying to live for God first, to be faithful to His will, places in the heart of a child what it looks like to prioritize God in the midst of a busy family life. Holy priestly vocations come from homes and families who are seeking holiness.”

In addition, parish families can encourage and support someone’s call to the priesthood. Send a card to a parishioner in the seminary and let him know he is being prayed for.

Father Schnobrich also suggested having a coffee hour after Mass to give the parish community a chance to get to know the seminarian.

If there is a young man who is active in the parish, those who honestly think he would make a good priest could gently propose that idea to him: “Hey, you look pretty comfortable on the altar. Has the priesthood ever entered your mind? I’ll be praying for you.”

“It is very important for parents, families and parish families to understand that when a man decides to go to the seminary, it doesn’t automatically mean he’s going to be a priest,” Father Schnobrich cautioned. “Going to the seminary is a further step in the discernment process where a man who believes he may be called is going into formation in order that the Church may now discern with him if the Lord is calling him.”