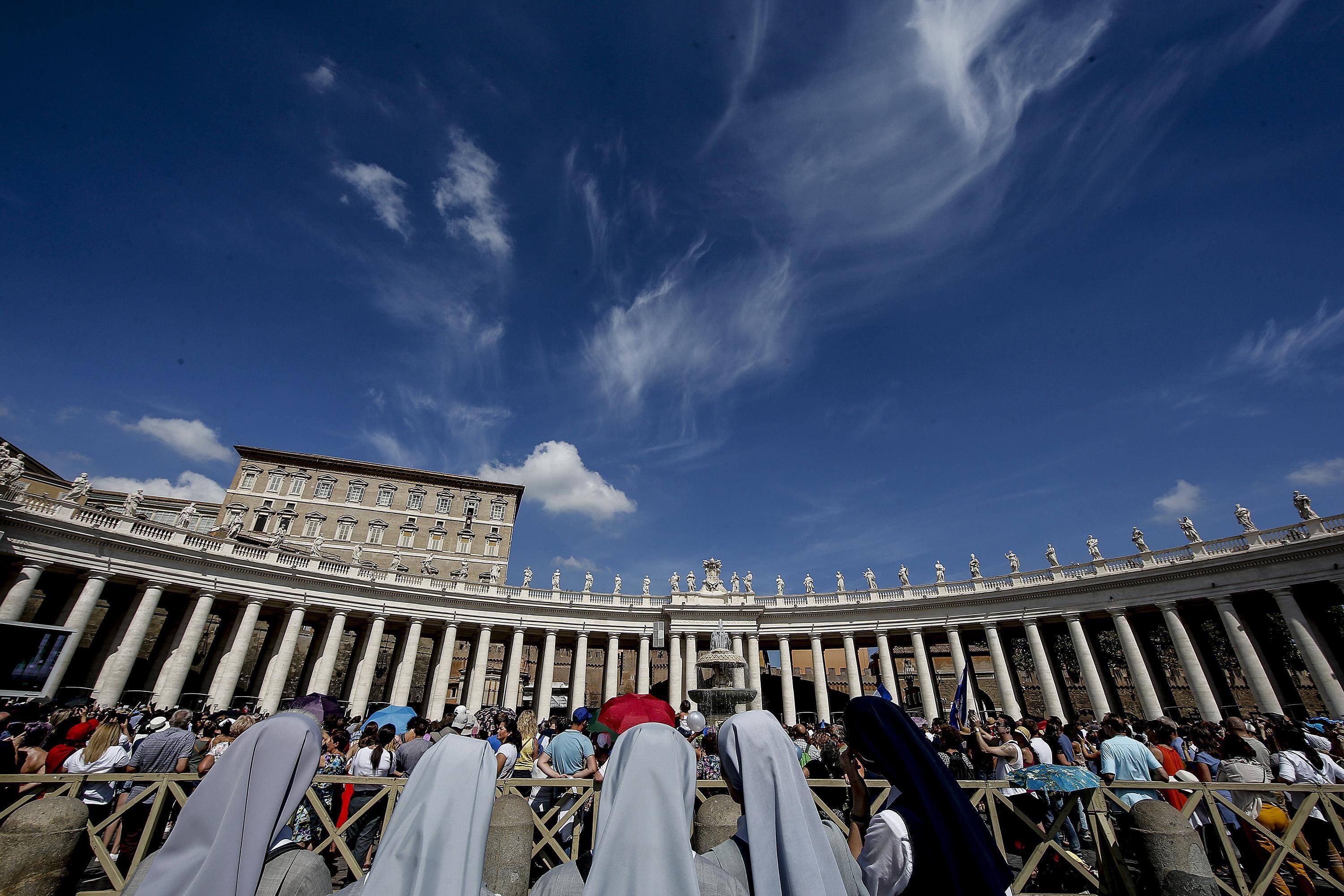 Photo Credit: CNS/Favio Frustaci - Pilgrims listen as Pope Francis leads the Angelus from the window of his studio overlooking St. Peter's Square at the Vatican.

There is a tale of a respected theologian who, when asked why he was Catholic, responded, “Because I was born Catholic, and I have yet to find anything else that better leads me to live a life of good.” His response may seem unimpassioned, but it is a story that I have always remembered; it resonates with my own experience of being Catholic.

The way in which Catholicism calls us to live grows and changes throughout our lives. A five-year-old lives faith differently than a 15-year-old, who lives faith differently than a 25-year-old or a 50-year-old. If we don’t check in with ourselves and with God to assess whether we are growing continuously in faith, we risk becoming complacent in our Catholicism and remaining stagnant in the development of our relationships with the Church, with God and with the world.

The theologian, in stating that he had not found anything more successful than Catholicism in leading him to live a life of good, suggests that he has explored alternatives. Yet, with each exploration he apparently found himself more thoroughly drawn to and more strongly committed to Catholicism. This conscious renewal of one’s decision to be Catholic is meaningful.

Furthermore, the theologian of the story recognized that commitment to faith does not rest at self-identification, but leads to living in a certain way. Not only should it be true that recognition of certain values can lead one to identify as Catholic, but also that one’s Catholic identity continuously leads to living a life of good.

Catholic since a few weeks after birth, I think one of the most significant trajectories my own faith journey has taken is a gradually increased awareness of the significance of relationships within the created world. Over the last five years, this most significantly has manifested itself in a greater awareness of how my daily behaviors and decisions affect other aspects of God’s creation and how they affect me in return.

Inspired by Catholicism’s call to recognize the dignity of all humans, especially the most vulnerable, to protect the rights of workers and to care for creation, I have tried to learn more about the connections that exist between the decision I make here in Vermont and the effect those decisions have on my neighbors throughout the world. This has led to prioritizing fair-trade and local purchases and reducing waste whenever possible. What may appear to be only an increase in ecological awareness is actually a deliberate effort to have a more positive impact on the world created by God and on the individuals created in God’s image, as a direct result of my Catholic identity.

Once, after graciously listening to me practice a presentation on “Laudato Si’” (the second encyclical of Pope Francis, subtitled “On Care for our Common Home”) my mother explained that she always had thought my growing “green” mentality was a result of moving to Vermont, but after hearing the presentation, she realized it had more to do with continued growth and discovery of the Catholic faith and its teachings than it had to do with my geographical and cultural surroundings. Her sharing of this observation made me wonder what other things I might be doing as an intended witness to my faith without others realizing that Catholicism is the source of my efforts. Doing what is right is good in and of itself, but we do a disservice to our faith when we do not intentionally make known the religious motivations of our actions.

Whether you originally chose to enter into full communion with the Catholic faith or not, I think it is fruitful to stop and ask ourselves why we choose to be Catholic today, what successive choices we are called to make by virtue of that Catholic identity and how we are publicly acknowledging our faith as the best guide to living that life of good.