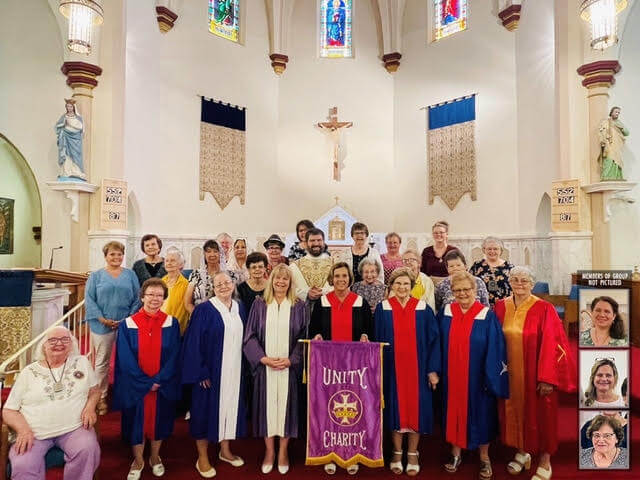 Photo Credit: Submitted/Valdemar Garibay - Members of the St. Albans Catholic Daughters of the Americans gather for a photo.

Catholic Daughters of the Americas, one of St. Albans’ oldest Catholic organizations, celebrated its 100th anniversary in May.

Members attended Mass at Immaculate Conception Church, and a banquet followed with 50 members in attendance.

The 100th celebration was dedicated to Edmundite Father Bernard Bechard, chaplain for CDA from 1981 until his death in 2010.

The First 25 years of history for the Catholic Daughters’ recall the years from 1920-1945. Woodrow Wilson was president and World War I was just over, radio broadcasting was in its first year and the 19th Amendment became law giving women the right to vote. Annie Driscoll was regent as 49 women were received into Court St. Mary #468.

Through the years 1945-1970 the court had its meetings over the William Doolin Store on Main Street. The court’s 25th anniversary took place at the Jesse Welden Inn commemorating the Catholic Daughters’ service to Church and community.

In 1980 it celebrated 60 years of service, and Cecile Leduc was regent.

The 75th anniversary took place at Dylan’s restaurant with Regent Mary Lou Zakrzwski. In 2019 the Covid-19 pandemic interrupted twice the court’s plans to celebrate its 100th year of “Unity & Charity.”

The Catholic Daughters is the oldest national Catholic woman’s organization in the world. Members are dedicated to strengthening their spiritual life through Christ and His Church. The organization was founded in 1903 by the Knights of Columbus, and members strive to live up to their motto “Unity & Charity.”

Catholic women who want to participate in social and charitable events or want more information may call Judy Smith at 524-4467 or Sue Bressette at 524-5451.