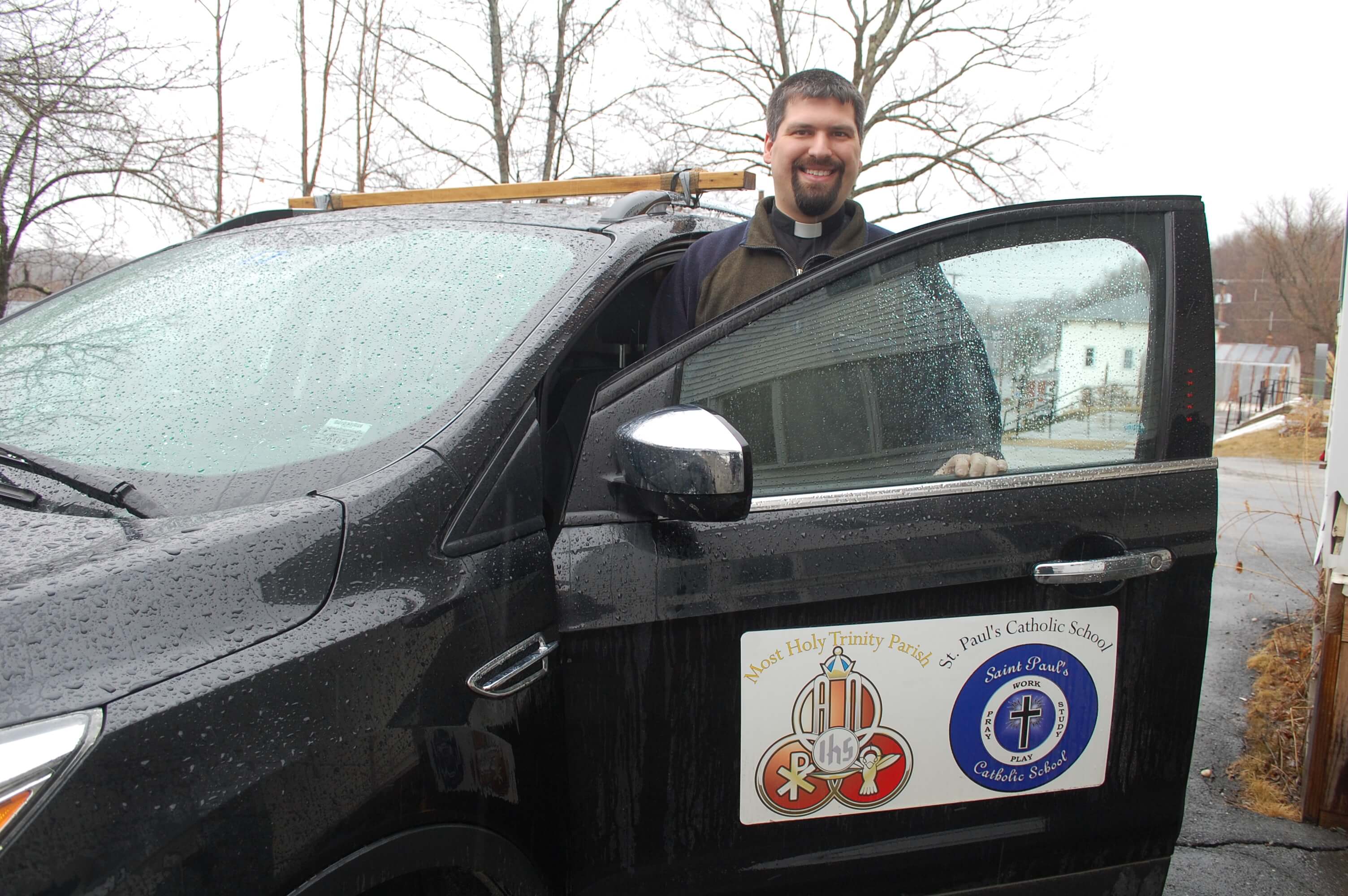 Photo Credit: Vermont Catholic/Cori Fugere Urban - Father Timothy Naples gets into his car outside the rectory in Barton.

After Father Timothy Naples received assistance from Vermont Catholic Charities Inc. for winter tires, he decided to pay it forward — or drive it forward, actually.

Using his Christmas collection funds, Father Naples helped a parishioner who drives another parishioner to Mass get winter tires.

A budget of $500 was to be split by up to five grants. As there was only one request, the priest decided to grant $280 to cover 50 percent of one parishioner’s purchase of winter tires.

“They had already installed them so I was unable to take up the offer of another parishioner to mount and balance for free any tires that we purchased with the assistance of the ‘Catholic Carpool Fund,’” he added.

He awarded the first grant at the end of January to a woman from St. Paul Church in Barton who brings a parent to Mass.

“The Vermont State Police are always doing winter awareness campaign on Facebook to remind people that winter tires are a safety feature,” Father Naples said. “Winter tires are important in the Northeast Kingdom especially because we have snow on the roads more weeks out of the year. Good tires are not a substitute for advanced planning and winter driving at slower speeds. But in winter weather they help.”

Father Naples, pastor of six churches in the rural Northeast Kingdom of Vermont, had long thought about connecting winter tires and Mass attendance. “The challenge of winter is for everyone. It is more challenging for us as pastors to continue to offer as many locations and options for Mass with our travel between churches in rural areas. It is likewise harder for parishioners to make it to available Masses in the winter.”

“If new winter tires are ever to help ‘two or more’ get to Mass, then I am glad to say that the parish can share some of the cost,” he said.

The Catholic Carpool Fund offers half the cost of winter tires to “good Catholic parishioners who brave the winter weather each weekend to get themselves and other [people] to Mass,” Father Naples said. “Carpooling is a curb on our American individualism and a challenge to our pride and independence — not to mention a conservation on fuel.”

Father Naples plans to offer the grant again in October as part of the churches’ budget. “I would rather have the parish take the $500 that would be my annual Christmas bonus and give it out in grants to promote participation in Mass and mutual support in the faith among family and friends,” he said.