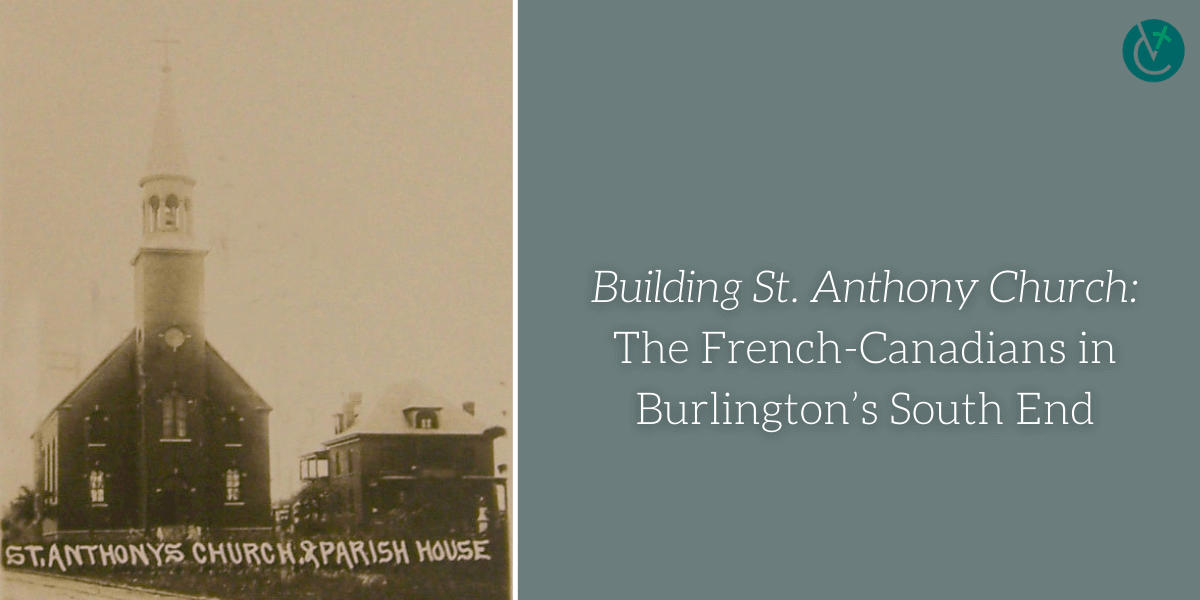 In the years following the establishment of New England’s first French-Canadian national parish in 1850, St. Joseph Parish in Burlington experienced steady growth. By the early 1880s, plans to build a larger church were well underway, and much of the funding was secured; the first church on Prospect Hill built in 1850 had become much too small to continue sustaining the expanding French-Canadian congregation in Burlington.

The new St. Joseph Church on Allen Street welcomed parishioners in 1887.  By the end of the 19th century, Msgr. Jérome Cloarec, pastor of St. Joseph’s from 1871 to 1920, reported as many as 3,200 worshippers attended Mass each Sunday — evidence that the French-Canadian immigrant population in Burlington was thriving and filling St. Joseph Church to capacity.  Many of these worshippers lived in Burlington’s South End and traveled first to the Prospect Hill church and later to the new one on Allen Street by special trolley.

Msgr. Cloarec noted the challenging travel situation for these large families and began crafting a solution.

This demolition, he continued, was effectively a careful, intentional dismantling effort to conserve as many materials such as bricks, wood and even windows from the old St. Joseph Church for the construction of another church.

The closing entry in the Annales for 1901 indicated that Msgr. Cloarec’s hopes for a new church to accommodate the French-Canadian residents of Burlington’s Lakeside area were becoming reality; he had purchased land on Park Avenue (now Flynn Avenue) for $1,000 on which he intended to build a new church.  An estimated 700 French-Canadians in Burlington’s South End would benefit from having a church closer to their neighborhoods.

Construction for la nouvelle église (the new church) began in April 1902, as noted in the opening entry written by Msgr. Cloarec in the Annales.  The cornerstone was placed and blessed by Bishop John Michaud, second Bishop of Burlington, on June 29, 1902, during a festive ceremony officially naming the new parish St. Anthony of Padua.  Father William Plamondon accepted Bishop Michaud’s request to serve as the “the new pastor of the new parish in Burlington.”

Father Plamondon, a young French-Canadian priest ordained for this Diocese in Rome in 1893, was appointed St. Anthony’s first pastor on Jan. 13, 1903, and relocated immediately to Burlington from Our Lady of Good Help Church in Brandon to assume his new post as pastor, overseeing the construction and meeting the French-Canadian congregation.

St. Anthony’s building dimensions, 110 feet long by 50 feet wide, were nearly identical to those of the dismantled St. Joseph Church, formerly of North Prospect Street.  Almost all the bricks and windows were used in the construction.  Four stained-glass windows from the old St. Joseph’s (donated by parish’s social societies between 1850 and 1870) were placed in the same positions at St. Anthony’s. The bell in St. Anthony’s steeple was also the original bell (1856) from St. Joseph’s steeple.  When Msgr. Cloarec commissioned a new stone altar to replace the original one in St. Joseph Church in 1901, that original altar became the altar at St. Anthony’s.

Construction of St. Anthony Church was complete by mid-1903, and the first Mass was celebrated on June 21, 1903. According to Father Plamondon’s annual report, there were 872 parishioners from 200 families.

Father Plamondon served St. Anthony’s until his death in 1940.

Father Plamondon and the French-Canadians of the South End persevered together to ensure the parish’s growth and success for generations, a true testament to their faith and trust in God.

—Kathleen Messier is the assistant archivist for the Diocese of Burlington.