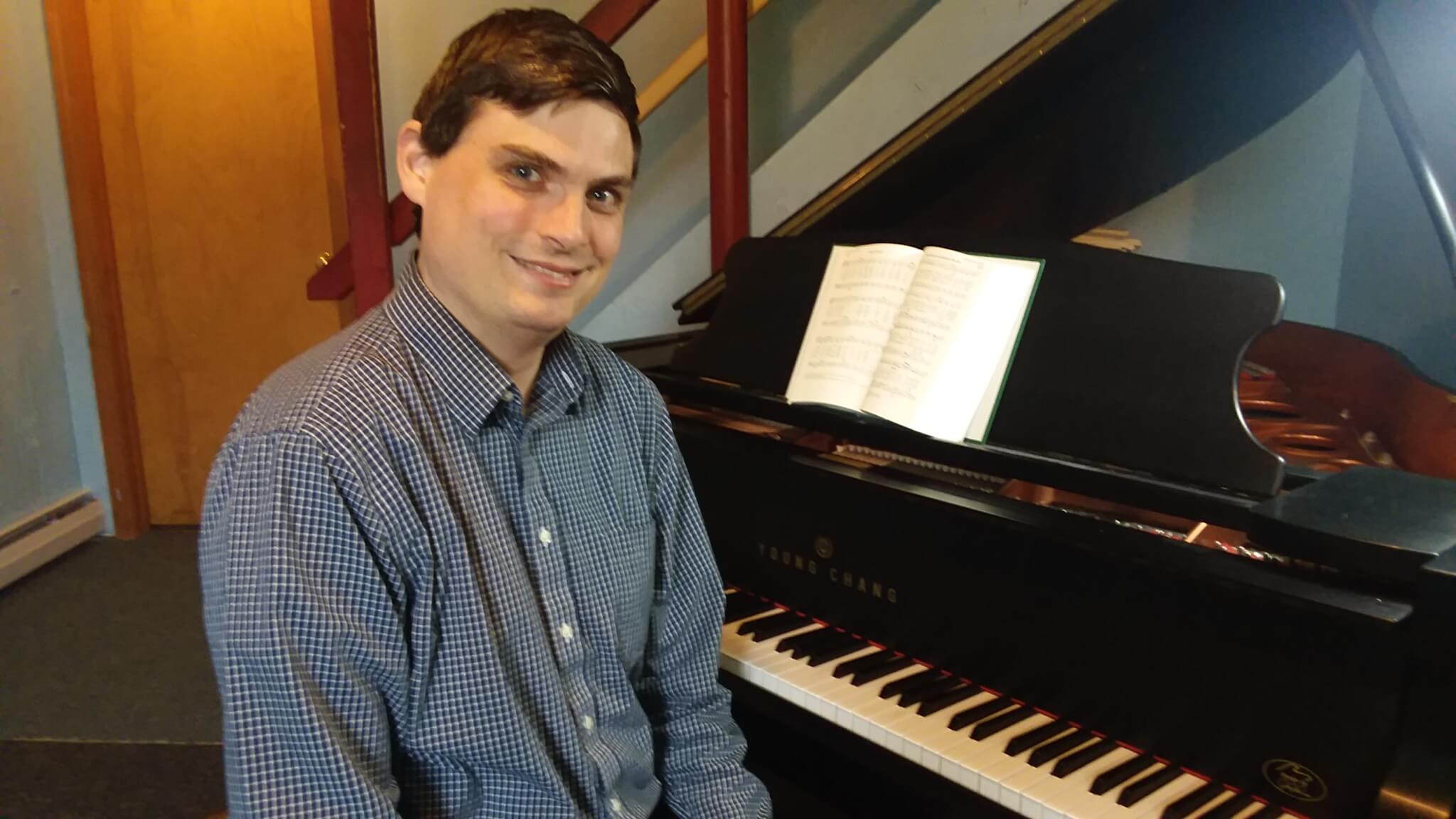 Each day during the Covid-19 pandemic, musician Breton Abbondanzio is posting to YouTube a musical meditation in the form of a hymn or an improvisation on a hymn. The hymns might be related to the Scripture readings of the day, but sometimes he chooses them because they have texts that are comforting or are reminders of God’s love.

“Since the pandemic started, there’s been a growing trend of posting music online,” said the director of music at St. Michael Church in Brattleboro and music teacher at St. Michael School.

“When the churches in the Diocese of Burlington closed for public worship, I wondered how I could continue ministering to the parishioners at St. Michael’s in their homes.”

He has an organ and piano in his studio at home, so he decided to post a hymn each day to spiritually nourish the St. Michael’s parishioners.

Called “Breton’s Daily Hymn Music Ministry,” the project began on the Feast of the Annunciation, March 25.

Abbondanzio tries to keep the videos to about five minutes each, just enough for a morning or

evening meditation or for an uplift at any time of day.

So far all of the pieces have been hymns. The musician will play the hymn on the organ

or improvise an arrangement on the piano. Recently he has been posting a link to the text for people to sing along.

A colleague at the school requested that he play Amazing Grace, so a piano improvisation on that tune was one of his first videos. He also posted O God Our Help in Ages Past and an improvisation on How Can I Keep from Singing, as well as some other standard Christian hymns. At the request of a parishioner, he also posted a video of himself singing.

Because he posts a link to his videos on his Facebook account and the posts get shared by people who know him, Abbondanzio has gotten responses from people in the parish and in other Dioceses and even from other Christians. “The response has been overwhelmingly positive so far, so I am encouraged,” he said. “One person told me that she cried all the way through one of the videos and that she felt her heart would burst. Other Christians have been drawn to the videos since we share hymns from a common heritage and have been moved as well.”

Because of the pandemic, social distancing has compelled people to retreat from their inherently social nature, and he thinks this has been difficult for most people. “Listening to music has a calming influence and can be done by oneself,” he said. “In the context of the Church, singing or listening to music at Mass is intended to unify the people who are gathered, and I think singing along with or listening to hymns in your home that are part of our

shared Christian heritage can be a way to unite us, even while we are apart.”

Although Abbondanzio had originally intended this ministry for St. Michael’s, he would be happy to see it continue to reach people outside the St. Michael’s community. “If people

who visit the page … share the videos, we can spread this music to others who might need a reminder that God is still with them in these difficult times,” he said.