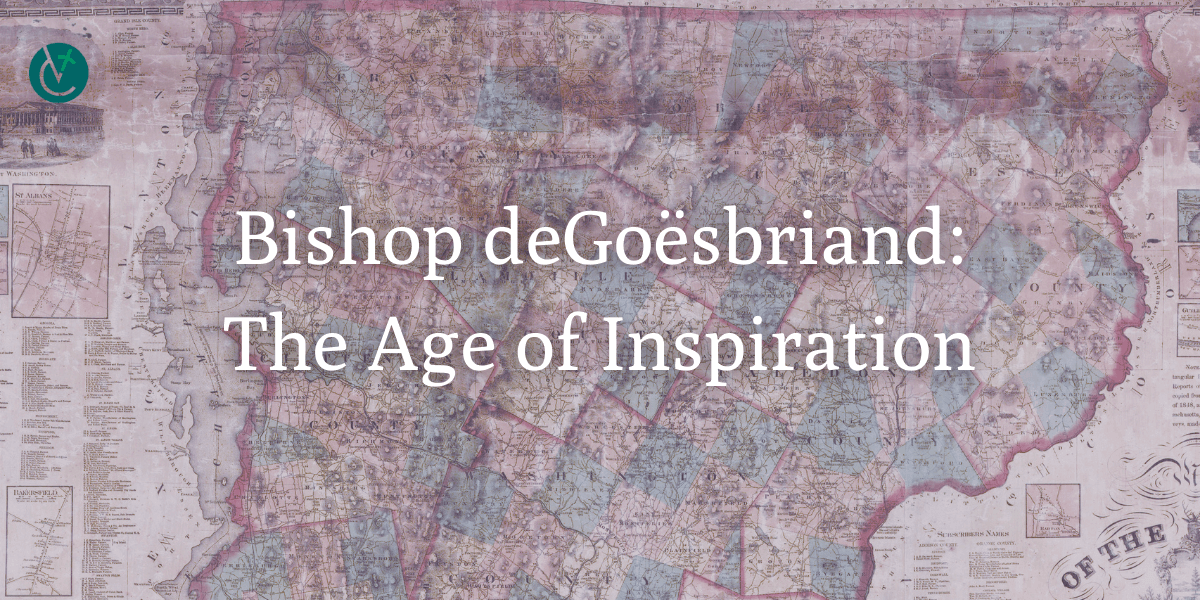 Bishop deGoesbriand: The Age of Inspiration

In 1893, Father  Joseph Kerlidou, writing about the pioneering priests of the Diocese of Burlington and Bishop Louis deGoësbriand’s own pastoral example, states: “They [the priests] did not know what it was to complain. The words and example of the bishop ever encouraged them for he was always the first to begin and the last to quit the labors of the mission. They love to repeat today how they enjoyed meeting a brother priest; what a treat it was for them to come together in the bishop’s house.  The small episcopal residence (Father Jeremiah O’Callaghan’s little school house on Cherry Street) was the only place they had to assemble for synods and retreats, but they all felt at home under the humble and hospitable roof of the good father, and could truly say, ‘How good and how lovely for brothers to live all united together’ [Psalm 133:1]. Bishop deGoësbriand was indeed the great and ever-throbbing heart of the Diocese.”

Bishop deGoësbriand established his credibility not just by performing administrative duties, but most especially by working as an ordinary pastor in a Diocese in which there was a lack of priests to cover all the Sunday Masses.  He took regular weekend rotations in churches in Underhill, Milton, Waterbury, Vergennes, Brandon, Williston, Burlington and elsewhere. His priests recognized that he was in solidarity with them.

Consequently, he established a lasting and enduring credibility as their leader because he shared in their efforts and fatigue.  Horse-and-buggy travel was uncomfortable and the weather unpredictable. Churches were poorly heated in the winter and hot and humid in the summer. One of his friends wrote about him: “He was often forced to wrap himself up in a buffalo robe to keep from freezing while hearing the confessions of the assembled people before saying Mass for them … the good shepherd was exposing his life for his sheep.”

Two years after his arrival in Burlington, the priest shortage required him to travel to Europe for several months to beg for help. On Jan. 10, 1855, he left New York City for Liverpool, England.  In April, he dined with Pope Pius IX in Rome and then went to All Hallows Seminary in Ireland where he recruited two young priests. In France, he obtained three priests, a transitional deacon and two seminarians.

By Sept. 13, 1855, he was back in Vermont with his increasing presbyterate.  He conducted his first synod of priests in October and stated in his episcopal diary: “This little band of missionaries is animated with a truly apostolical spirit.” His physical presence was the animating spirit behind the fervor of his priests.

In December, he began his monthly rotation covering Sunday Masses in Brandon and Middlebury and continued to cover Masses in other towns throughout the state — not to mention traveling all the way to Quebec and Ohio during the summer of 1856 to raise money to build more churches in the Diocese.

Share This Post
Diocese of Burlington, Father Lance Harlow, Evangelization and Catechesis, Bishop deGoesbriand
See More
Last Article
A Thanksgiving Prayer of Gratitude
Next Article
A message from a Vermont Catholic Community Foundation board member
Back to Vermont Catholic Magazine