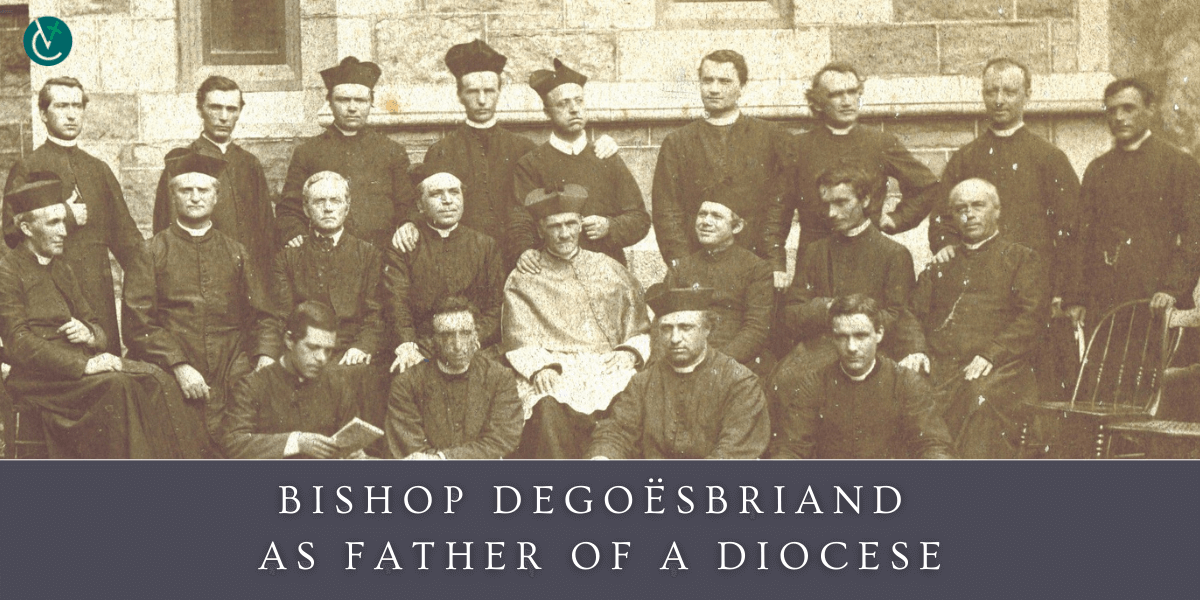 Bishop deGoësbriand as father of a Diocese

A very touching event took place in the Diocese of Burlington on Oct. 30, 1878, when Bishop Louis deGoësbriand celebrated his 25th anniversary of episcopal ordination at the age of 62.

Bishop Bayley’s aunt was none other than St. Elizabeth Ann Seton. The assisting bishops were Bishop Amadeus Rappe of Cleveland, with whom Father deGoësbriand had worked as a missionary in Ohio and as his vicar general; and Bishop John McCloskey of Albany. The ordaining prelate was Archbishop Gaetano Bedini, first papal nuncio to the United States who was actually on his way to Brazil to become its first papal nuncio but could not enter the country because of a plague.

“Since it has pleased Almighty God to bring you to this 25th anniversary of your Episcopal consecration, we the priests of the Diocese, offer you our hearty congratulations on this remarkable occasion. When we look back on the last quarter of a century during which the direction of the affairs of this Diocese has been placed under your care, we must say that there is just cause for congratulations. Twenty-five years ago, the state of religion in this portion of God’s vineyard was far from flourishing.  When we contrast its present condition with what it was then, we must only say “the finger of God is [upon it]”— that the blessing of God was given in abundance upon your work.

On your arrival at the seat of your labors you found little to console you.  There were but a few churches, some unfinished, and all of the lowliest kind.  It is true to say that the bishop was without a clergy. Catholic schools there were none.

We must … thank God that He has given to this young Diocese in your person a true and devoted bishop.  When we say this, we consider it the highest praise that can be given to man. We here on this occasion tender to you not only the ‘reverence and obedience’ which every priest promises his ordinary, but we assure you of our most sincere esteem and warmest affection.”

There is more to the speech which gives evidence of the bishop’s many accomplishments. The priests refer to Bishop deGoësbriand as the “shepherd of the sheep” an allusion which is not lost on any father — whose sole aim is to protect those sheep entrusted to his care, to nurture them and to lead the into safe pastures.

Bishop deGoësbriand took that fatherhood very seriously, and his priest sons honored him with their highest praise.