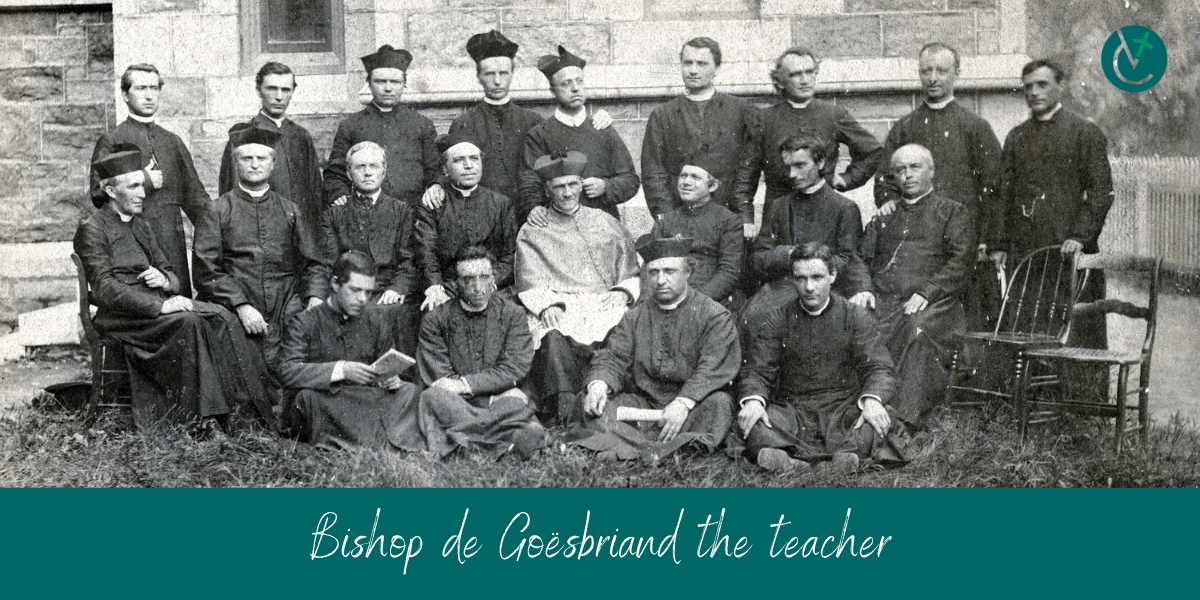 Most of you know about first Bishop of Burlington Louis de Goësbriand from his legacy of building the churches and institutions of the Vermont Diocese from 1853 until his death in 1899.

One of the many fascinating aspects of his life occurred before his arrival in Burlington. As a missionary priest in the Diocese of Cincinnati, Father de Goësbriand was recognized early on by his own bishop for his keen intellect and administrative abilities.  He was appointed vicar general to the newly formed Diocese of Cleveland in 1848 but was also appointed as the first rector of the newly established St. Francis de Sales Seminary (later to be called St. Mary’s Ecclesiastical Seminary) in Cleveland. It had very modest beginnings, to say the least.

Within the first two years, there were 18 students living with Bishop Amadeus Rappe and Father de Goësbriand at the bishop’s residence. The stables adjacent to the building had been renovated into classrooms. Father de Goësbriand was in charge of admitting new seminarians, teaching, overseeing their academic formation, liturgical formation and conducting spiritual exercises. It might be added that this “class” of new students was all European: Irish, French and German. Their theological formation was in Latin.

One can imagine the level of difficulty with such a diverse group of young men.  The seminary house rules, approved by Father de Goësbriand, included some of the following points: “They [the seminarians] will love and consider one another as members of one family without respect of persons or distinction of origin and nationality.”  A more practical rule also had to be put into place: “By respect for the Blessed Sacrament they will avoid to spit on the floor or carpet of the chapel.”

Bishop Rappe spoke highly of Father de Goësbriand when he wrote to Archbishop John Baptist Purcell in July 1848: “Father de Goësbriand is doing very well in Cleveland; he has eight seminarians in his charge in whom he is striving to instill the matchless spirit of St. Sulpice.  They truly respond to his efforts and give us much hope.”

In a thank-you letter to Bishop Jean-Marie Graveran of the Diocese of Quimper in France, who had released Father de Goësbriand from France to come to America as a missionary in 1840, Bishop Rappe wrote the following: “He [Father de Goësbriand] is the proud son of noble parents who is a precious pearl for the Church of God.  He has already rendered great service for the cause of religion and we all hope that his career will be imminently useful for our young Church in America.”

By 1849, another rector was appointed to the seminary, freeing Father de Goësbriand to devote more time to his duties as pastor and vicar general. The too-small seminary eventually moved in 1850 to a three-story building, a former summer home, which Bishop Rappe had purchased due to the increasing number of young men coming to study.

That same year, Father de Goësbriand took some time to recuperate from over-exhaustion and probably some lasting effects from the Maumee fever he had contracted a few years earlier. But he didn’t sit still. He traveled from Cleveland to Boston where he went on a fundraising mission and he preached at several Boston churches to raise money for the construction of the cathedral of Cleveland. From Boston he traveled to New York City and eventually to France to conduct business there on behalf of Bishop Rappe but also to visit his aging parents and nine brothers and sisters. The seminary was in good hands.

He was a teacher to the end.