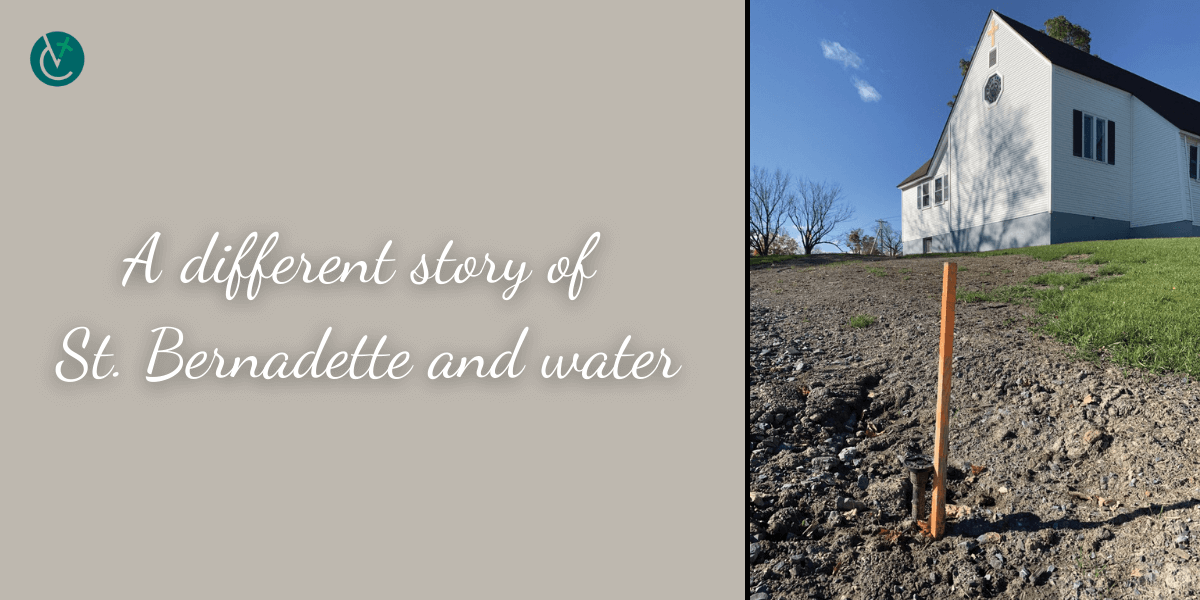 A different story of St. Bernadette and water

Nor did it ever have running water.

But of all this is about to change, as the parish recently tapped into the town water line and added a bathroom to the 80-year-old church.

Beginning in 1939 until the completion of the church, Mass was celebrated at the Bridport Grange Hall. Before that, Bridport Catholics had to travel to nearby towns to attend Mass.

St. Bernadette Soubirous — who experienced the Marian apparitions of Our Lady of Lourdes — was canonized on Dec. 8, 1933, by Pope Pius XI. It is logical that this newly-canonized, French saint would have been an appealing patroness for the largely French-Canadian farming community of Bridport.

The construction of St. Bernadette Church was completed in 1941, and dedicated on Dec. 7, 1941 — actual Pearl Harbor Day, and almost exactly eight years after the saint’s canonization.

St. Bernadette Church originally had a rectory with a pastor in residence, and water would be brought to the church from the rectory. Eventually, the small parish was no longer able to have its own resident priest, and the rectory was sold in 2015, thus cutting off the church from a close, readily accessible source of water.

Father Luke Austin is currently the pastor of St. Bernadette and of Assumption of the Blessed Virgin Mary Church in Middlebury. He lives in the rectory in Middlebury, and goes to Bridport for the 7:30 p.m. Mass on Saturdays and as needed during the week.

Marianne Manning, administrative assistant for both the St. Bernadette and Assumption churches, received all her sacraments at St. Bernadette — and her children were baptized there as well. She recalled that when she was a child, women in the parish would volunteer in pairs to clean the church, for one-month stints. She would go with her mother to help. They would bring flowers to arrange in the sanctuary, and would bring the water also because the church had none.

The construction of the bathroom is now complete, but awaiting installation of the septic tank in order to turn on the water. Until that occurs, sacristans Steve and Sheila Huestis maintain a full bottle of water in the sacristy — for the water cruet used at Mass. Water must also be brought for holy water, baptisms and watering plants.

The new ADA-compliant bathroom is located at the back of the church, repurposing the space that had been the confessional. Father Austin now hears confessions in the sacristy, on the first Friday of each month.