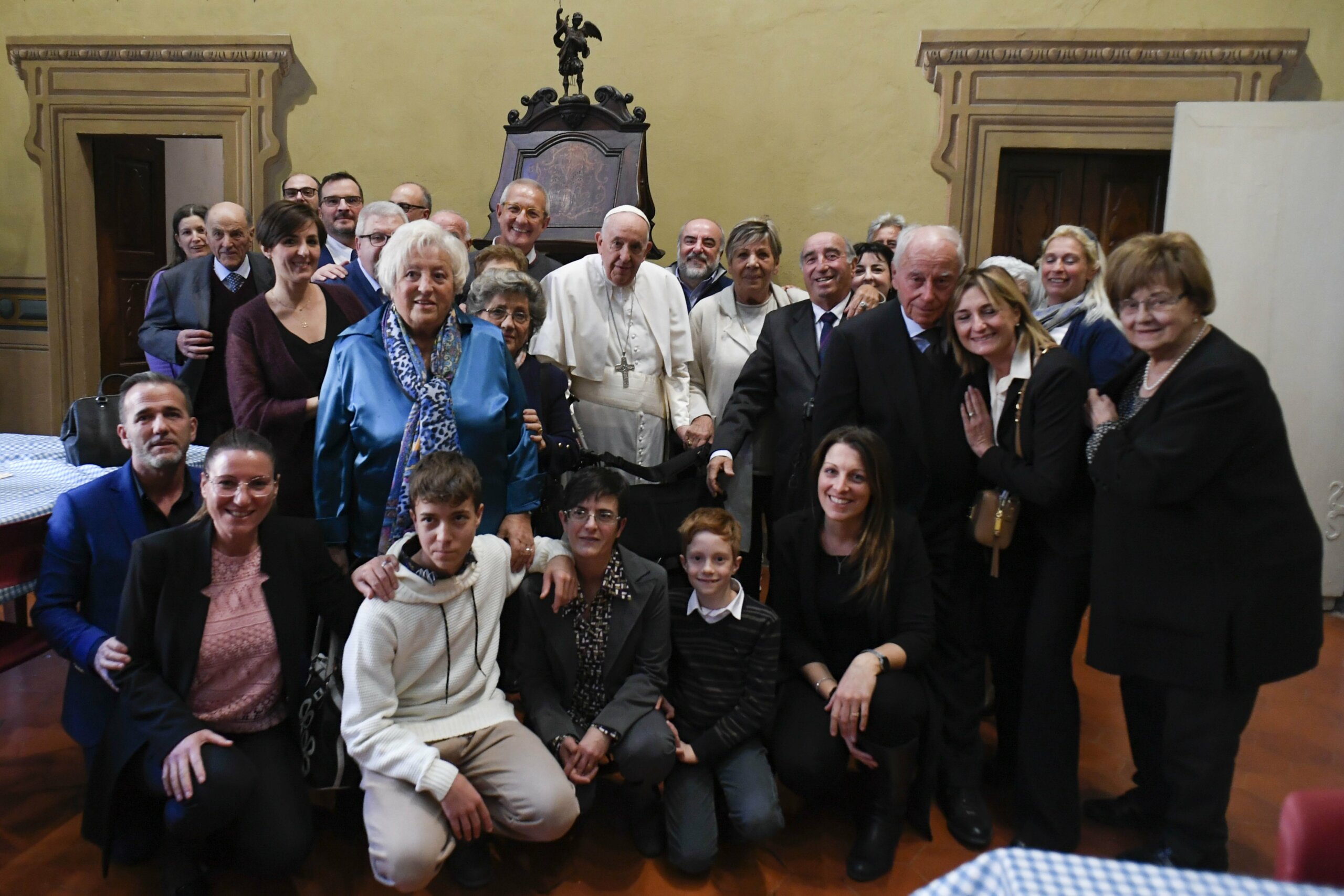 Photo Credit: CNS/Vatican Media - Pope Francis poses for a group photo with his cousins and their families after Mass and a luncheon in Asti, Italy, Nov. 20.

Visiting his family, pope celebrates feast of Christ the King

With several of his cousins and their children and grandchildren present, Pope Francis celebrated Mass in the Asti cathedral, giving a nod to his family roots and drawing people’s attention to the root of Christian faith: the cross of Jesus.

The Mass Nov. 20, the feast of Christ the King and World Youth Day, was the only public event during the pope’s weekend visit to the region from which his grandparents, Giovanni Angelo Bergoglio and Rosa Vassallo, and his father Mario immigrated to Argentina in 1929.

The visit was timed to coincide with the 90th birthday of Carla Rabezzana, the pope’s second cousin. And, after landing in Portacomaro near Asti Nov. 19 and stopping for a prayer in a village church, Pope Francis headed straight to Rabezzana’s house for lunch.

After lunch, the pope visited a nearby home for the aged and then headed to the little village of Tigliole to visit another second cousin, Delia Gai.

The cousins and their families joined an estimated 4,000 people for Mass with the pope the next day in the Asti cathedral.

In his homily, sprinkled with words in the Piedmont dialect his grandmother taught him, Pope Francis focused on how the kingship of Christ is different from any idea people usually have of a king.

“He is not comfortably enthroned but hanging on a gibbet,” the pope said. “The God who ‘casts down the mighty from their thrones’ appears as a slave executed by those in power.”

Accusing no one, “He opens his arms to all. That is how He shows himself to be our king: with open arms,” the pope said.

With open arms, Jesus “embraced our death, our pain, our poverty, our weakness and our misery,” he said. “He let Himself be insulted and derided, so that whenever we are brought low, we will never feel alone. He let Himself be stripped of his garments, so that no one would ever feel stripped of his or her rightful dignity. He ascended the cross, so that God would be present in every crucified man or woman throughout history.”

“This is our king, the king of the universe,” Pope Francis said.

At the beginning of the Mass, Stefano Accornero, a local seminarian, was installed in the ministry of acolyte.

Departing from the prepared text of his homily, Pope Francis told Stefano and anyone else preparing for priesthood: “Do not forget that this is your model: do not cling to honors, no. This is your model; if you do not think of being a priest like this king, better stop here.”

Urging members of the congregation to gaze upon Jesus on the cross, the pope told them Christ does not “give us the same kind of fleeting glance that we so often give him. No, he stays there, a ‘brasa aduerte,’ (arms open, in Piedmontese) to say to you in silence that nothing about you is foreign to him, that he wants to embrace you, to lift you up and to save you just as you are, with your past history, your failings and your sins.”

By surrendering to Christ’s love and accepting his forgiveness, anyone can begin again, the pope said. “Salvation comes from letting ourselves be loved by him, for only in this way are we freed from slavery to ourselves, from the fear of being alone, from thinking that we cannot succeed.”

“Ours is not an unknown God, up in the heavens, powerful and distant, but rather a God who is close. Closeness is God’s style; he is close with tenderness and mercy,” the pope said. “Tender and compassionate, his open arms console and caress us. That is our king!”

The day’s Gospel reading included the exchange of the “good thief” saying to Jesus on the cross: “Remember me when you come into your kingdom,” and Jesus replying, “Today you will be with me in paradise.”

That same promise is available to all who honestly admit their faults and trust in the Lord, the pope said. “Before God only soap and water, no makeup, just your soul as it is. Salvation starts there.”