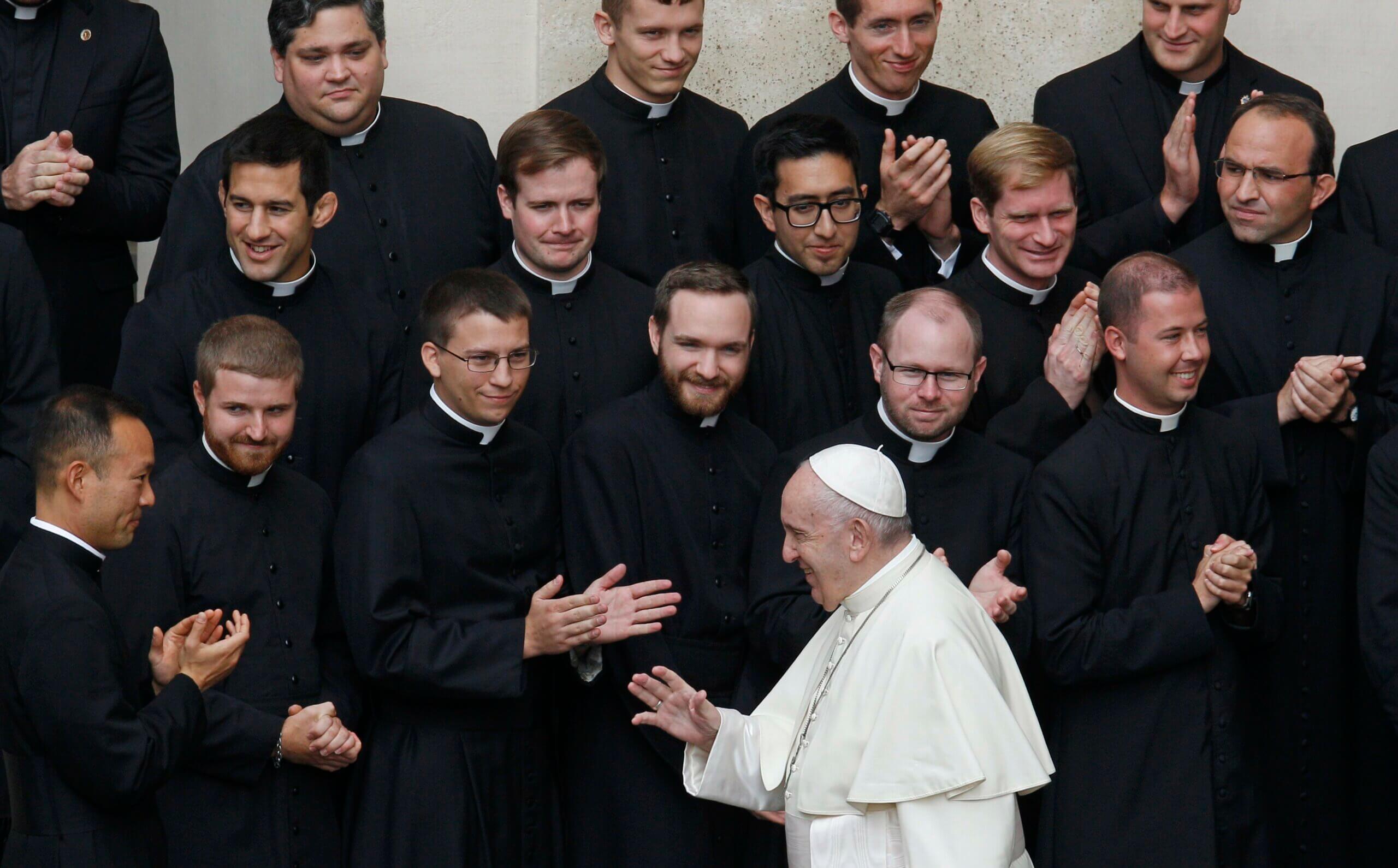 Photo Credit: CNS/Paul Haring - Pope Francis greets priests and seminarians from the Pontifical North American College during his general audience in the San Damaso courtyard at the Vatican in this Sept. 30, 2020, file photo. In his message for the World Day of Prayer for Vocations, the pope said that priests and laity should work together to evangelize.

The Christian vocation is for all members of the church to work together and show that one human family united in love is not a utopia but is the reason God created humanity, Pope Francis said.

“When we speak of ‘vocation,’ then, it is not just about choosing this or that way of life, devoting one’s life to a certain ministry or being attracted by the charism of a religious family, movement or ecclesial community,” he wrote in his message for the 2022 World Day of Prayer for Vocations.

“It is about making God’s dream come true, the great vision of fraternity that Jesus cherished when he prayed to the Father ‘that they may all be one,'” he wrote.

The day of prayer will be observed May 8 at the Vatican and in many Dioceses throughout the world.

The message, released at the Vatican May 5, was dedicated to the theme, “Called to build the human family,” and it looked at the meaning of “vocation” within the context of a synodal church, that is, “a church that listens to God and to the world.”

In his message, the pope wrote, “We know that the church exists to evangelize, to go forth and to sow the seed of the Gospel in history. This mission can only be carried out if all areas of pastoral activity work together and, even more importantly, involve all the Lord’s disciples.”

“We must beware of the mentality that would separate priests and laity, considering the former as protagonists and the latter as executors,” he said, and instead “together carry forward the Christian mission as the one people of God, laity and pastors.”

All members of the church are called: to be protagonists together in the church’s mission as “an evangelizing community”; to be guardians of one another and of creation; and to build a fraternal world, he wrote.

“In a word, we are called to become a single family in the marvelous common home of creation, in the reconciled diversity of its elements,” the pope wrote.

This dialogue allows each Christian to become “ever more who we are,” meaning, for those ordained in the priesthood, to become ever more “instruments of Christ’s grace and mercy,” for consecrated men and women to become ever more “the praise of God and the prophecy of a new humanity,” and for married couples “to be mutual gift and givers and teachers of life.”

Christians receive a vocation as individuals and “we are also called together” like “the tiles of a mosaic,” he wrote. “Each is lovely in itself, but only when they are put together do they form a picture.”

“This is the mystery of the church: a celebration of differences, a sign and instrument of all that humanity is called to be,” he wrote.

For that to happen, Pope Francis said, “the church must become increasingly synodal: capable of walking together, united in harmonious diversity, where everyone can actively participate and where everyone has something to contribute.”

Therefore, with each vocation striving to make “God’s dream” of human fraternity come true, each vocation “contributes to a common objective: to celebrate among men and women that harmony of manifold gifts that can only be brought about by the Holy Spirit.”

The pope urged priests, consecrated men and women, and the lay faithful, “let us journey and work together in bearing witness to the truth that one great human family united in love is no utopian vision, but the very purpose for which God created us.”