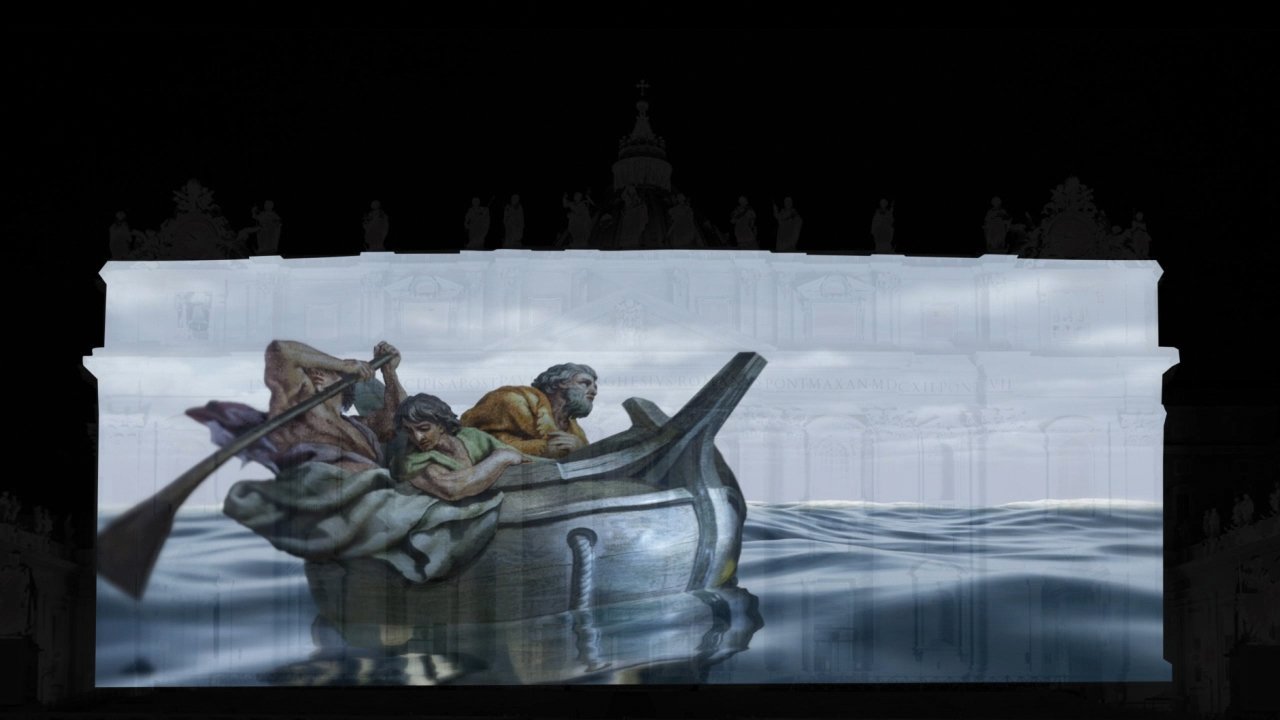 Photo Credit: CNS/Basilica of St. Peter - An artistic rendition shows a scene from an 8-minute film on the life and discipleship of St. Peter that will be projected onto the facade of St. Peter's Basilica. The film, in Italian with English subtitles, will be shown every 15 minutes from 9 to 11 p.m. Oct. 2-16.

For two weeks in October, the facade of St. Peter’s Basilica will be the screen for the nighttime showing of a short film about the life, the call and the ministry of St. Peter.

The eight-minute 3D film, using art from the basilica and from the Vatican Museums, will be projected onto the facade every 15 minutes from 9 p.m. to 11 p.m. Oct. 2-16. The narration is in Italian with subtitles in English.

“What are the features of the church? What is its true face? That of the pope? The scandals? Its missionaries? Its doctrine and catechism? Its social commitment?” asked Cardinal Mauro Gambetti, archpriest of the basilica.

While all those are part of the church, the cardinal told reporters Sept. 20, “sometimes you need to dust off the mirror” and provide a clearer, more basic image of the church to both believers and visitors, which is why the basilica wants to present to the public the life and faith of St. Peter.

Conventual Franciscan Father Agnello Stoia, pastor of the basilica, said the millions of people who cross the basilica’s threshold each year include pilgrims wanting to renew their faith, but also many visitors simply attracted by the majesty and beauty of the art, architecture and history of the basilica.

Both types of visitors must be welcomed, he said, and helped to understand why the church, built over the tomb of St. Peter, is so important to Catholics and to Christians in general.

In the months following the projection of the film, Father Stoia said, the basilica and the Diocese of Rome will offer a series of events to help people follow the footsteps of St. Peter around Rome and, it is hoped, help them come to the same profession of faith in Jesus as “the Messiah, the son of the living God.”

The projects are supported by the Fratelli Tutti Foundation, which is based at the basilica and dedicated to highlighting the intersection of art and faith, promoting greater knowledge of the basilica and its treasures and supporting dialogue with other cultures and religions.

Jesuit Father Francesco Occhetta, general secretary of the foundation, said that in January the Fabbrica di San Pietro, the office charged with the physical upkeep of the basilica, will welcome its first apprentices. The 20 young people will come from a variety of countries and will work for six months with the masters of the Fabbrica’s mosaic studio, carpenters and other technical staff.

Something similar existed at the basilica in the 1700s, he said.

Cardinal Gambetti also announced that the basilica will start offering an “international Mass” at noon Wednesdays after Pope Francis’ general audience. Groups of pilgrims present at the audience will be invited to do the readings in their language or provide the music or otherwise share their language, culture and faith with other pilgrims.