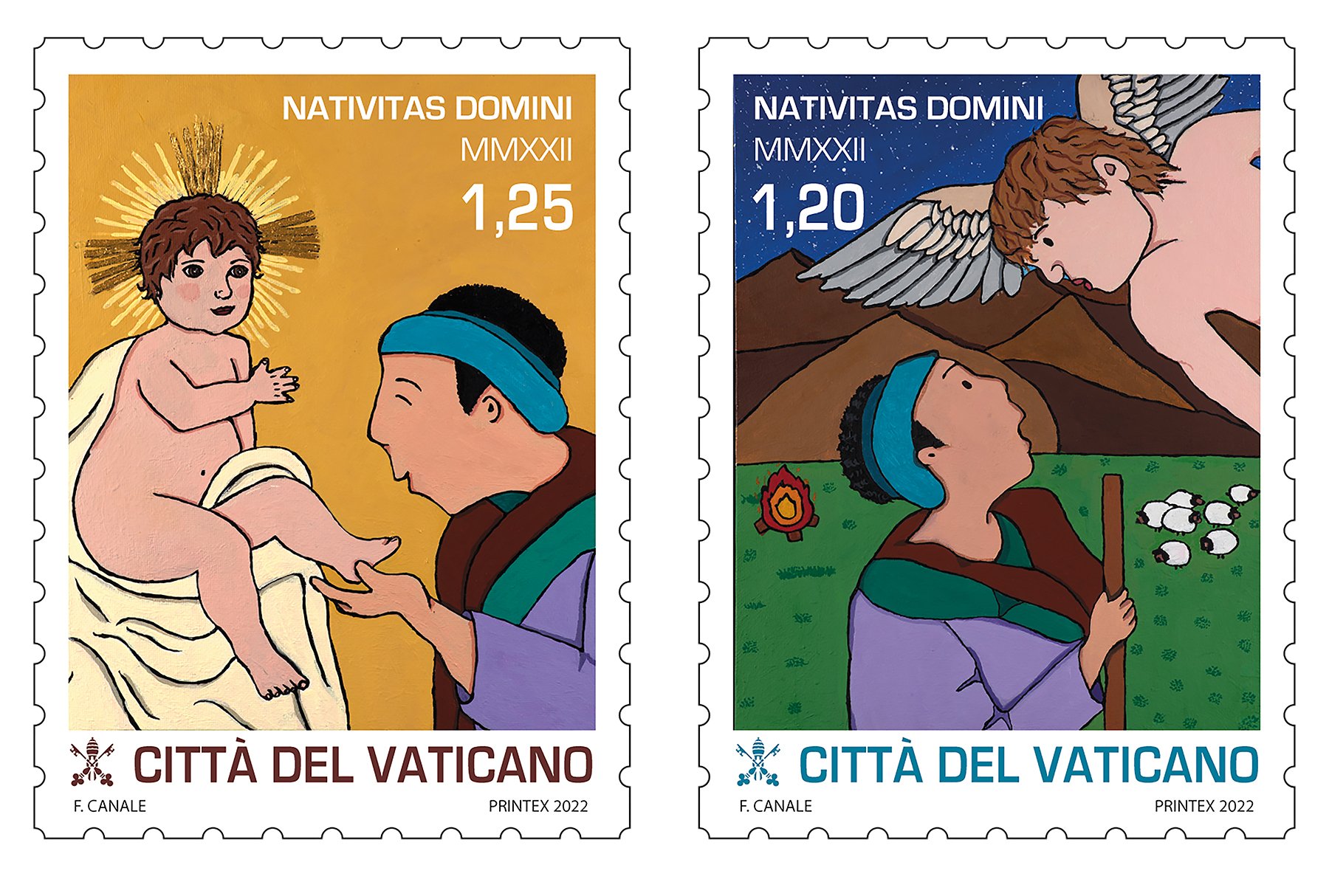 Photo Credit: CNS/Vatican Philatelic Office - These two Vatican Christmas stamps were painted by Francesco Canale, an artist born without arms or legs who paints holding a brush between his teeth. The Christmas stamps will go on sale at the Vatican post office Nov. 16.

The Nativity scene that will sit under a 98-feet-tall silver fir tree in the middle of St. Peter’s Square this year will feature 19 life-sized figures carved in cedar by artisans in the northeastern Italian town of Sutrio.

The tree comes from Rosello, a village of only 182 residents, in Italy’s central Abruzzo region, said a news release issued Oct. 28 by the office governing Vatican City State. The decorations on the tree are being made by young adults at a residential psychiatric facility in Rosello.

The tree will be lighted, and the traditional Nativity scene unveiled Dec. 3, the office said. The display will remain up until after the feast of the Baptism of the Lord Jan. 8.

The cedar for the Nativity scene figures, the Vatican said, came from trees selectively cut by gardeners to improve the health of other trees in several public and private gardens. None of the trees were cut specifically for the sculptures.

The Holy Family, the ox and donkey and an angel will be under an arched structure made of larch. The other figures — including the Three Kings, the shepherdess, a carpenter, a family and a “Cramar,” or local wandering salesman — will be on the surrounding platform or ramps leading to it.

The day before the office announced the plans for St. Peter’s Square, the Vatican’s Philatelic Office published a notice about the Vatican’s 2022 Christmas stamps, which were painted by Italian artist and activist Francesco Canale, who was born without arms or legs and paints holding a brush between his teeth.

He painted two stamps — one of an angel announcing the birth of Jesus to a shepherd and one of a shepherd adoring the baby Jesus.

Share This Post
Vatican, Christmas, Nativity, Stamps, Francesco Canale
See More
Last Article
‘The greatest of all love stories’
Next Article
A gift from God
Back to Vermont Catholic Magazine