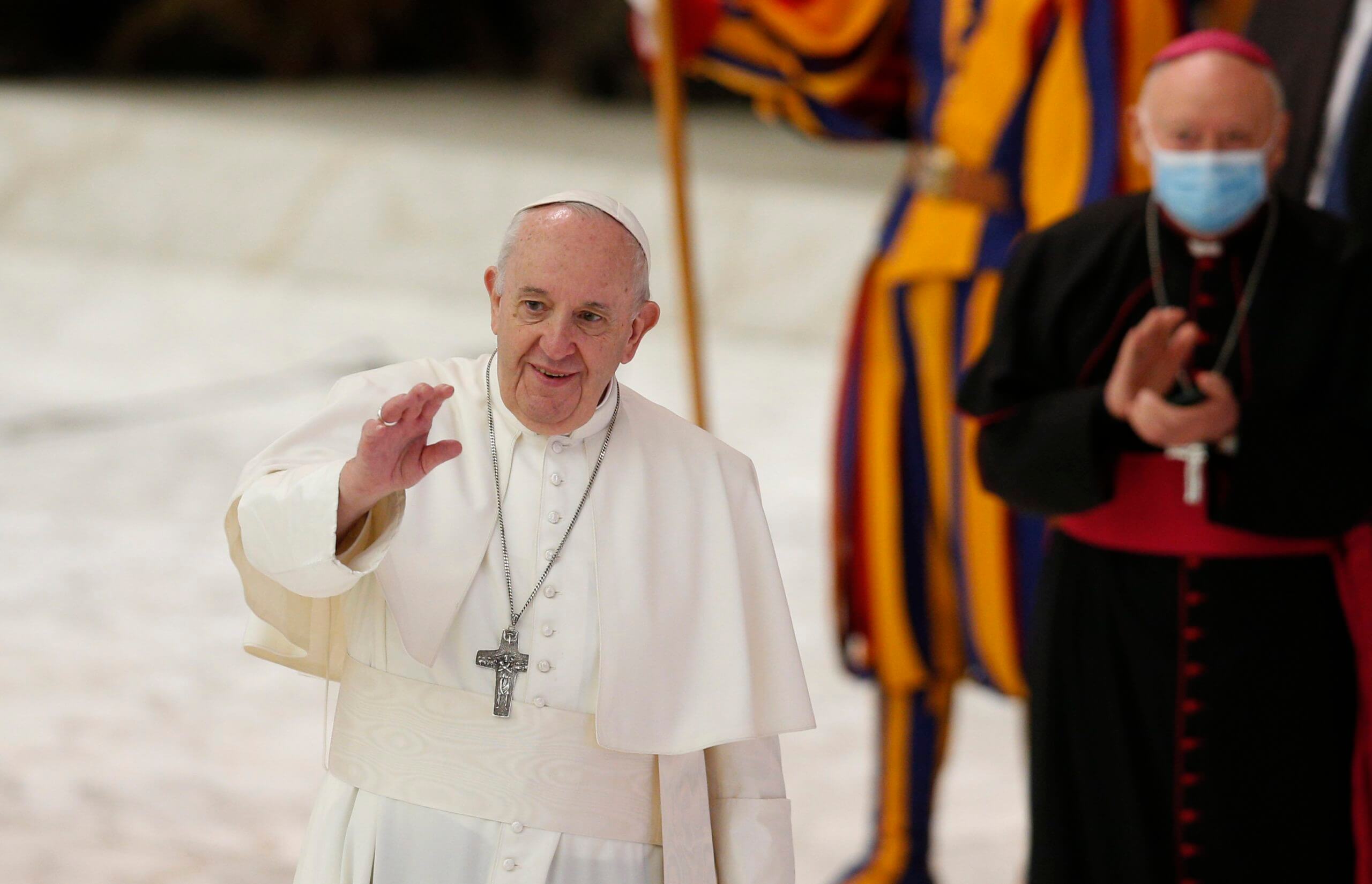 Photo Credit: CNS/Paul Haring - Pope Francis greets the crowd during his general audience in the Paul VI hall at the Vatican Oct. 21.

True prayer, like true faith, leads to care for others, pope says

Being indifferent to or hating others is to deny the existence of God’s presence in one’s neighbor, Pope Francis said.

“This is practical atheism,” the pope said Oct. 21 during his weekly general audience.

“To not recognize the human person as an image of God is a sacrilege, an abomination, the worst offense that can be directed toward the temple and the altar,” he said.

Arriving in the Paul VI audience hall, the pope once again observed social-distancing measures by taking his seat immediately rather than going to greet members of the crowd up close.

He also apologized and explained that mingling with them would increase “the danger of infection for you.”

“I am sorry for this, but it’s for your safety,” he said. “But please know that I am close to you in my heart. I hope you understand why I do this.”

Before his main talk, the pope said he noticed a mother cuddling and breastfeeding her crying baby at the start of the audience.

Upon seeing this, he said, “I thought, ‘That’s what God does with us, like that mother, who with such tenderness tried to rock the baby, to feed the baby. It is a beautiful image.”

“Never silence a child who cries in church. Never. Because it is a voice that recalls God’s tenderness,” he said.

Continuing his series of talks on prayer, the pope talked about “the wicked” person often mentioned in the Book of Psalms and described them as someone who “lives as if God does not exist.”

The Book of Psalms, he said, presents prayer as a “fundamental reality of life” that serves as a “boundary,” which prevents “us from venturing into life in a predatory and voracious manner.”

However, he said, there are “the wicked” ones, like those who go to Mass “only to be seen” or to show off, or those who pray out of habit and with no depth, thus rendering “a false prayer” to God.

“The worst service someone can give God, and others as well, is to pray tiredly, in a habitual way, to pray like a parrot: blah, blah, blah. No. We must pray with our hearts,” the pope said.

“Prayer is not a sedative to alleviate life’s anxieties; or, in any case, this type of prayer is certainly not Christian,” he added. “Rather, prayer makes the person responsible” for others as can be seen “clearly in the ‘Our Father’ that Jesus taught his disciples.”

Pope Francis said the psalms teach Christians that prayer is more than just seeking God’s help for oneself but rather a “collective patrimony, to the point of being prayed by everyone and for everyone,” the pope said.

“If you pray so many rosaries and then gossip about others, you have resentments, you have hate against others, this (prayer) is purely artificial,” the pope said.